Righthander Denis Diaz is currently in Lansing for his first year of full-season ball.

Denis Diaz remains a work in progress in his fifth season with the Toronto Blue Jays organization but the team still believes in his right arm. Despite a career record of 12-14 and an earned run average just over five, the Jays still believe there’s untapped potential in the native of Tegucigalpa, Honduras, who  was signed as a free agent by the Jays in 2013 for a $20,000 bonus. The 22 year-old told Lansing Lugnuts play-by-play announcer Jesse Goldberg-Strassler in late April there was one performance that helped convince Toronto to sign him.

“I was with the national team from Honduras and I went to Guatemala,” Diaz said. “The scouts saw me. I pitched a game against Guatemala. I threw a no-hitter into the fifth inning and the scouts got really interested in me and I got signed.”

Diaz was an outfielder growing up before going on the mound as a 15 year-old. He said the Jays told him to drop one of his off-speed pitches.

“Most of the coaches (growing up) want you to throw a curveball,” Diaz said. “I used to throw a curve and I didn’t have a lot of feeling for it so I had to develop a split-finger and that was my out pitch. When I got signed with the Blue Jays, my pitching coaches just took it away because it’s a dangerous pitch to throw.”

Diaz said he had a lot to learn when he signed with the Jays.

“Since I got signed, my mechanics were pretty bad. I thought I had a feeling for pitching but when you get here, you understand that things you know are pretty small,” Diaz said. “I’m watching the game in a different way. Now I see a major league game and you see there’s small things like just pitches, sequences. I feel I’ve on the right path for now and getting to a place I want to be as a pitcher.”

The 6-foot-1 Diaz spent two years with the Dominican Summer League Blue Jays, earning mid-season All-Star honours in 2014 after splitting eight decisions with a 3.91 earned run average. He struck out 48 batters and walked 16 over 53 innings. His U.S. debut came in 2015 with the Gulf Coast League Blue Jays, winning four of five decisions with a 3.58 ERA and 31 strikeouts in 37-2/3 innings. He also had a one-game cameo in Dunedin but wound up with the loss. 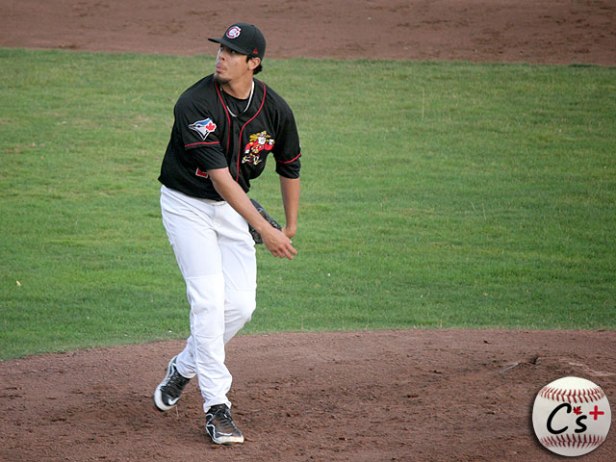 Denis Diaz was the pitcher of the week in the Northwest League in August of last year.

Diaz reported to Bluefield for the start of 2016 where he put up a 2-1 record with a 2.91 ERA in 21 innings. That earned him a promotion to Vancouver where he joined the C’s rotation. His first start was a four-inning, two-run performance in a no-decision at Everett July 27. He took the loss in his next two starts before making a scintillating debut at Nat Bailey Stadium where he handcuffed the Spokane Indians to just one hit and two walks over six shutout innings August 18. That effort earned him the Northwest League Pitcher of the Week award. That was the only win he could secure out of his six decisions, finishing with a 7.71 ERA and walking 28 batters with only 14 strikeouts in 28 frames. Diaz said his mental game was not where it needed to be.

“My year in Bluefield was different as (compared to) my time in Vancouver because I   struggled a lot in Vancouver,” Diaz said. “Mentally, I was off. I was overthinking myself so I tried to focus a lot on trying to being relaxed and calm. I worked a lot on that and I think that has helped me a lot.”

Diaz began 2017 with the Dunedin Blue Jays and managed to work around five walks over four shutout innings. He was sent down to Lansing after that and gave up just one run over his first two starts covering 9-2/3 innings, including his Lugnuts debut against the Bowling Green Hot Rods April 20 in which he rung up seven batters over 5-2/3 innings. He was beat up for a total of 13 runs over his next three starts spanning nine frames before responding with a pair of one-run outings in which he struck out 12 in 11 innings, including a season-long six inning start versus the Lake County Captains May 25.

Diaz is still looking for his first victory in the Midwest League as he has gone 0-3 with a 6.02 ERA. Walks continue to a problem as he handed out 30 free passes against 36 strikeouts over 40-1/3 innings. 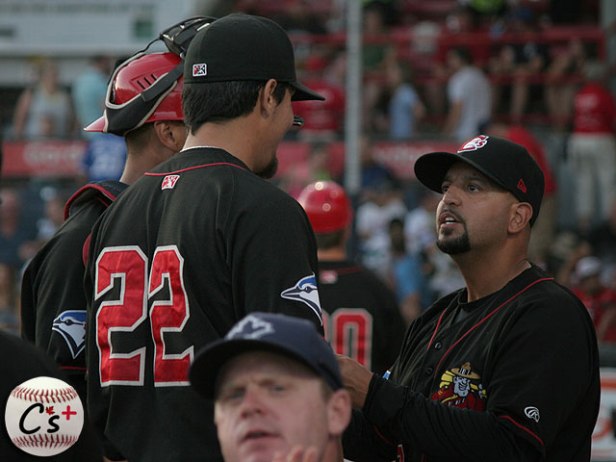 “If you get to the point where you get a feeling for all of your pitches, now you can get to pitch sequences and the more detailed stuff of the game. I’m still working on mechanics…You get to the point that if release the ball where you have to release it, you’re going to pitch good and you’re going to have a good feeling for your pitches. Sometimes you don’t have to think too much about mechanics and just try to work with your repertoire. Sequences, it depends on what you got…Your changeup is not just working or just one pitch is working so you got to work with it and be intelligent and know what kind of hitters are at the plate.”

Diaz has the raw tools to succeed, including a fastball that ranges from 90-92 MPH and has gone as high as 95 according to radar gun readings last year. The key now for Diaz is to harness that heater so he can become just the third player from Honduras to make it to the major leagues, joining outfielders Gerald Young and Chito Martinez.