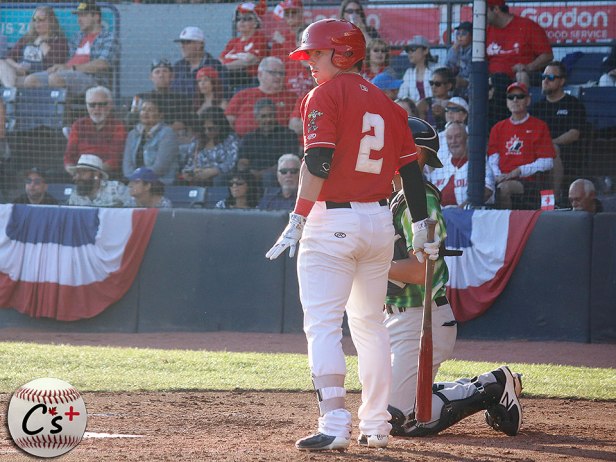 Mattingly Romanin posted on-base percentages of .426 and .378 in his two seasons with Vancouver.

Three players with Vancouver Canadians ties are looking for a new employer. 2016-2017 C’s infielder/outfielder Mattingly Romanin and 2016 outfielder Nick Sinay were released by the Toronto Blue Jays this week while 2013 lefthanded pitcher Matt Dermody was designated for assignment.

The 25 year-old Romanin’s release is not the first time the Blue Jays organization has disappointed the Romanin household. Mattingly’s father Mal was laid off by the club after working in the team’s public relations department, a move that did not sit well with a number of folks in the Toronto media.

Romanin returned to Vancouver to begin 2017 and earned a promotion to Lansing on the 4th of July thanks to a .442 on-base percentage. He was sent back to Vancouver after slashing just .204/.261/.296. The 5-foot-10 Burlington, Ontario native finished his Northwest League regular season with a .378 on-base mark to help offset a .200 batting average.

Romanin did see action in one playoff game as he a drew a walk in three at-bats in Game 3 of the Northwest League championship final against the Eugene Emeralds. The next night saw Romanin and company celebrate a league title with a victory in Game 4 the next night at Nat Bailey Stadium.

Romanin was the first player I interviewed at last year’s Media Day just days before the season began. The Blue Jays’ 39th round pick of the 2015 draft from Chicago State University provided the big highlight of 2016 with a grand slam home run on Canada Day against the Spokane Indians. He also provided a personal highlight for me by using a photo of mine as his Twitter avatar of him crossing home plate after the home run. 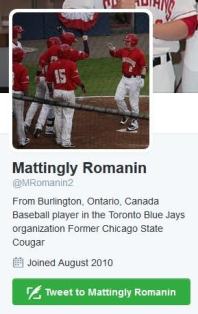 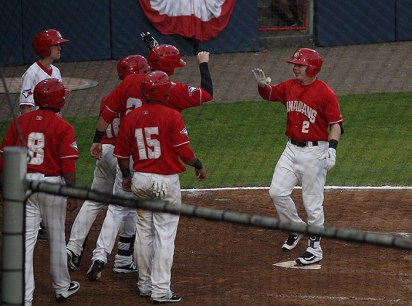 Mattingly Romanin is greeted by his teammates after crossing home plate on his grand slam home run against the Spokane Indians July 1, 2016.

Nick Sinay took more than one for the team in 2017. He took 38 of them as he set the Midwest League record for hit by pitches with the Lansing Lugnuts.

The 5-foot-10 Marcellus, New York native has been plunked 70 times over 676 plate appearances spanning his three seasons in the minors since being taken by the Blue Jays in the 22nd round of the 2015 draft from the University at Buffalo Bulls.

Though Sinay played just one game for Vancouver in 2016, he managed to get hit by a pitch to go along with a base hit against Spokane June 19. He was sent down to Bluefield shortly after that game and never got to see any action at Nat Bailey Stadium. Lansing Lugnuts broadcaster Jesse Goldberg-Strassler interviewed Sinay after his ability to be a ball magnet last season.

Matt Dermody helped Vancovuer win the 2013 Northwest League champion Vancouver Canadians after a 5-1 record and a 1.77 earned run average out of the bullpen.

Matt Dermody is looking to catch on with another team after spending parts of the last two seasons with Toronto. After pitching just three innings scattered over five appearances with the Blue Jays in 2016, the 6-foot-5 southpaw saw extended action in 2017 and won his first two major league decisions to go along with a 4.43 earned run average over 22/1-3 innings. The 27 year-old from Norwalk, Iowa struggled this spring with a record of 0-1 and a 10.29 ERA over seven innings. He was DFA’d after the Blue Jays acquired righthander Sam Gaviglio from the Kansas City Royals for cash or a player to be named later.

Here’s hoping Romanin, Sinay and Dermody all land on their feet with another organization in 2018.