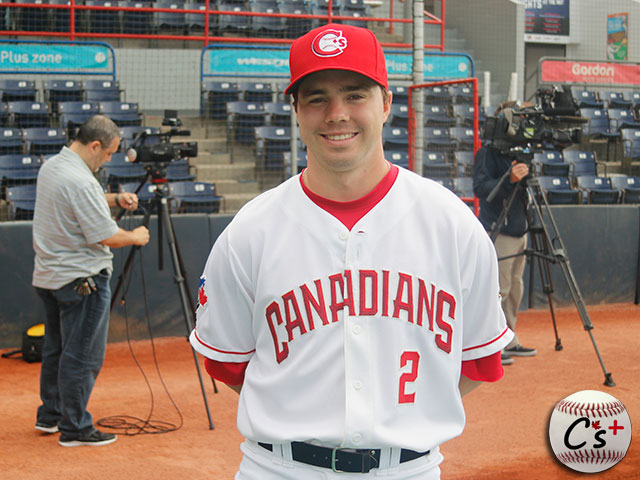 Mattingly Romanin will begin his third professional season with the Vancouver Canadians.

Staying healthy and giving it his best shot – that’s what it boils down to for returning Vancouver Canadians infielder Mattingly Romanin.

The Burlington, Ontario native began the 2016 season in Vancouver and played a dozen games for the C’s, getting hits in seven of them and reaching base at least once by a walk or a hit by pitch in four others.  The only game he did not reach base was a June 29 game against the Tri-City Dust Devils when he had just one at-bat as a pinch-hitter. However, his season was cut short in mid-July due to injury.

“I actually tore a cartilage in my wrist in a game in Boise last year,” said Romanin. “Yeah, it was frustrating that my season came to an end so quickly especially when I felt I was playing really well and helping our team win. It was tough but that’s the way it goes sometimes so now the goal is just to stay healthy and help our team win this year.”

Romanin’s year ended by triple slashing .229/.426/.343 with one double, one home run and seven runs batted. That home run and four of those RBI came on Canada Day against the Spokane Indians at Nat Bailey Stadium when he connected for a grand slam against Alex Daniele. The right-handed hitting Romanin called it a proud moment for him, his father Mal Romanin (a Blue Jays media official) and his entire family.

“It’s just something that I was lucky enough to be able to put a good swing on a fastball there,” said Romanin. “To do it here (in Vancouver) was just unbelievable. I still have a hard time believing that it actually happened but it did and I’m hoping I have more of those to come.”

Mattingly Romanin celebrates with his teammates after belting a grand slam on Canada Day in 2016.

Romanin has been in extended spring training in Florida where he and his teammates have been toiling in the heat.

“You get down in Florida and especially being up north, everybody says ‘Florida, you’re so lucky.’, said Romanin. “I mean, I am truly lucky to be there but it gets hot there and it’s a grind, especially when you’re working the days we work down there. But it’s a great opportunity to get better for us and I believe we took full advantage of that.

“We had a lot of guys that worked hard and I truly believe everybody here took that opportunity to get better and that’s why we’re here…I’m excited. I’m ready to get going. It’s been a long time down in Florida playing in extended spring training…so it’s nice to get up north, get out of the hot sun in Florida and get out to Vancouver, where it’s beautiful here and we’re ready to go.”

Manager Rich Miller liked what he saw from Romanin during his time in Dunedin.

“He had a really good extended,” said Miller. “He really started to hit the ball well. You’ll see him at third. You’ll see him maybe at first, some second, you’ll see him DH, maybe some outfield, maybe your good utility player.”

Romanin is also looking forward to assuming a leadership role with the 2017 Canadians.

“I feel I am one of the veteran guys on the team(and) one of the older guys on the team with quite a few guys that are (for the) first time leaving the Florida complex,” said Romanin.  “I feel like I’m going to have to play a big role and letting them know how things are done here and helping them through the tough times where you’re outside of your comfort zone. As far as me taking on a bigger role, I look forward to it, I’m excited to and I’m ready for it.”

Normally an infielder, Romanin has also spent time as a catcher as he worked out at the position during spring training. The Chicago State product may not get to squat behind home plate in a game but he says he’d be prepared for such an eventuality.

“I’m not sure how often that’s going to happen but when it does, I’ll be ready for it,” said Romanin. “It was something I was working on, just to add another position to help me get in the lineup every day…I caught a lot when I was younger. I helped catch some bullpens and I caught a couple of games in college so I’m not unfamiliar to the position. But at this level, I haven’t really thought about it a whole lot so it was a big adjustment getting to catch the guys of this calibre but it was fun, I enjoyed it and I’m ready to go.”

Splitting time between second and third base since being drafted by the Blue Jays in the 39th round of 2015, Romanin made two errors at the hot corner for the C’s last season but was errorless in 22 chances at the keystone and helped turn three double plays. He has a hard time deciding which position he likes best.

Romanin will be especially happy to play in Eugene, Everett and Hillsboro as those were the stadiums he did not visit in 2016 because of his wrist injury. He is poised to scratch Eugene off the list as the C’s open the 2017 season with five games against the Northwest League champion Emeralds. If Romanin can visit the other six Northwest League cities this season, Romanin will have accomplished his goal of staying healthy as he tries to help the C’s contend for a league championship.