“For five minutes you came within… y-you came this close. It would KILL some men to get so close to their dream and not touch it. God, they’d consider it a tragedy.” –
Ray Kinsella to Archie ‘Moonlight’ Graham in Field of Dreams

Dawel Lugo swings away for the Vancouver Canadians during the 2013 season.

The major league debut for 2013 Vancouver Canadians shortstop Dawel Lugo has been put on hold. The 23 year-old from Baní, Perava in the Dominican Republic was called up by the Detroit Tigers at the beginning of the week. He was summoned from Triple-A Toledo after third baseman Jeimer Candelario went on the 10-day disabled list with a wrist injury.

Lugo was assigned #18 with the Tigers but after two days of soaking in the views of Comerica Park from the third base dugout, he was sent back to the Mud Hens. Detroit needed two fresh arms for its bullpen in its series finale against Cleveland.

The right-handed hitting Lugo batted .284 with seven doubles, a triple and a home run but has drawn just one walk in 141 at-bats down in Toledo. That has been the continuation of a seven-year trend for the 6-foot-tall shortstop as he has heard ball four just 102 times in 2,513 at-bats so far in his minor league career.

Baseball America rated Lugo as the Tigers’ eighth-best prospect coming into the 2018 season after being traded from Arizona as part of the J.D. Martinez deal. Before that, he was the number 2 prospect in the Diamondbacks system in 2017 and was rated 9th in the Blue Jays system in 2013.

According to a BA scouting report, Lugo has the defensive chops for third base with a strong arm and good glove skills but may not have the power in his bat to profile at the hot corner. They add his bat would be sufficient for second base but there are doubts he has the skills to stick at the keystone position. However, Lugo has enough bat speed, hand-eye coordination and pitch recognition skills to make himself a tough out at the plate.

Baseball America believes Lugo will see time in the majors in the near future.

“Lugo isn’t all that far away from competing for a big league job. The former shortstop could end up at second or third base depending on team need. He doesn’t have exceptional upside, but he has a good chance at a solid big league career.”

Hopefully Lugo’s major league career will be more than two days spent in a dugout. On a personal note, I was hoping Lugo was going to head out west with the Tigers during their series in Seattle over the weekend. It would have been a good excuse to head down to Safeco Field (like I really need an excuse to begin with!).

Regardless, watch for Lugo’s picture to be added to the banner of your favourite C’s blog in the near future. He wore a major league uniform during at least one regular season contest and that’s enough to make it to the C’s Plus Baseball “Banner of Fame”.

It’s the same rationale I use for pitcher Sean Reid-Foley for claiming him as a former Vancouver Canadian though he never appeared on the mound during a game. He was at Nat Bailey Stadium in uniform for the 2014 playoffs and that’s good enough for me. This ruling is final! ;D 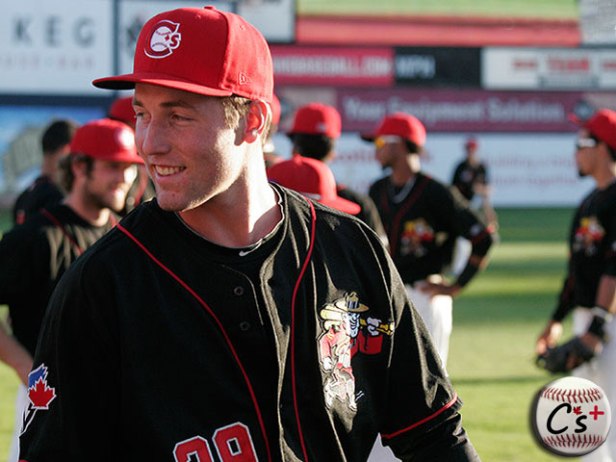 Here’s a list of the former C’s who have appeared on the website banner so far with the years they spent in Vancouver in parentheses.

If you are detecting a pattern, it’s two players for each banner. Who will be the next former Vancouver Canadian to make it to the show? Lugo will need some company up there so hopefully the identity of the next C’s player to reach the bigs will be revealed in the not-too-distant future.

Here’s the latest batch of tweets from or about the Vancouver Canadians from former players, broadcasters, bloggers and other persons of interest. Among the tweets saw some former C’s wish their Moms a Happy Mother’s Day as well as video highlights, player interviews and more Kevin Smith observations about his Lugnuts teammates.

Vicuna with the #SCtop10 play to end it!!! For everyone asking … yes, Samad hit the very top of the CF fence but don’t worry he has mandatory lift tomorrow morning. Boys are rollin

Saturdays may be for “the boys,” but today it’s all about @3_JonathanDavis.

Happy birthday to one of our favorite human highlight reels! 🎉🎂 pic.twitter.com/1OqF8Vzzxd

20 years ago… had to recreate one of my favorite childhood pics! Time flies! Back at the place where it all started… pic.twitter.com/SzKVDuGbYZ

Last night in the handshake line Josh Palacios made sure all the guys knew tonight would be another Jays Win, You Win Saturday. Sure enough, he sends everyone in attendance and all of his teammates to the movies with a walk off single! #BlueJays

Got an extra cape for the birthday boy? pic.twitter.com/PTzIEGZq26

Brock Lundquist homered and the Lugnuts won their fifth straight game on the road, sweeping Beloit, 8-6!

The first place Lugs are 23-13, and starting up a seven-game homestand from Monday, May 14, through Sunday, May 20th. #LugLife

A Dunedin Blue Jay yesterday, Justin Dillon is on 🔥 with AAA-Buffalo tonight!

In two outings with the Bison this year, Dillon has thrown 8.2 innings, allowed 0 earned runs, and struck out 15! https://t.co/OHqVa2oAbI

Happy Mother’s Day from a son thankful for advice, mentorship, unrelenting support, acceptance of failure, and belief in my future. I love you mom.#MothersDay

Kacy Clemens made Mother’s Day Weekend a memorable one, hitting his first Florida State League home run with his mom in the crowd and sending her home with the ball!

I’ve been working you out on those back fields since you were 3! Very proud of you son. https://t.co/2UKvgHemdA

My Mom is a saint, I really don’t know what I’d do without her.

#BlueJays 2B prospect Cavan Biggio hit his 10th HR of the season today in his 29th double-A game. Last season, he had 11 in 127 games.

Happy Mother’s Day to my biggest fan and supporter. Thank you for… https://t.co/T7FXUNnC3N

Happy Mother’s Day to ALL the moms out there! Here is a special message from @TurnerLarkins and @chavezyoung242 ❤️ #LugLife #MothersDay pic.twitter.com/M9MTxsoc2t

Happy Birthday and Mother’s Day to my Momma!! Love you!!🤩😆 pic.twitter.com/pVHvYn1Kl2

Hell yes, @QUHawksBaseball! This will never get old. Go get em next week in regionals! pic.twitter.com/B7RA29bTAg

It’s dOg day at the park and I couldn’t be more excited!!! @LansingLugnuts

Dalton Pompey has homered from both sides of the plate tonight. It’s like he has something to prove.

If anyone knows how to add the Victory Royale banner to this, pls do. Congratulations @QUHawksBaseball on back to back titles! And more to come! pic.twitter.com/uXLq5qZ9w7

First off, prayers with my guy @rjpruitt08 . Respect how hard you play the game man, we want you back soon. @Buffoooo32 and @dsell_11 both 🎲 – WEIRD – keeping us in the game. @chavezyoung242 comes through in the clutch with a 💵 AB and winning run #TheBoyFlys

Fist bump to Dwight Smith Jr. Congratulations on getting called up to the #BlueJays. pic.twitter.com/hmY4uWNLPz

DALTON POMPEY becomes the first #Bisons player in nearly a decade to homer from both sides of the plate!!! Last to accomplish the feat was Trevor Crowe, 7/31/08 in Durham! Herd up 4-3 in the 8th. #BlueJays pic.twitter.com/abzggiUSao

🔥No big deal just ANOTHER WALK-OFF WIN for the Lugnuts!🔥

Quite the day already for former Dunedin Blue Jays with the @FisherCats!

And it’s all for naught. Ryan Metzler (former Blue Jay minor leaguer) hits his fifth home run off of Danny Young to end the no hitter. 7-1 Fisher Cats.

Congratulations to Jared as he gets a 9th inning save in a 3-2 Tin Caps win. A 3-6-1 double play and a caught looking K. 7 pitches 5 strikes pic.twitter.com/fF4XxRtKDI

When Kacy Clemens drilled his first FSL home run last Friday, his dad Roger was live on the radio with @Jimtara broadcasting the game.

Not even sure who to highlight … Gudi for 📸 the leather multiple times, Obi for some clutch hits, Diaz for 🎲, or @Brock_Lundquist for yet Anotha One 💣 … but the #6MonthParty is in full effect.

Huge shoutout to @LansingLugnuts CF @chavezyoung242 for going 3 for 4 today and signing for my daughter! Class act and an exciting player. pic.twitter.com/W6MdvpmTM5

Shannon was very effective yesterday. He threw strikes and found a way to get out of a jam with an automatic runner at second base to start the 10th inning! https://t.co/YexxygQo23

4 people have already tagged me in the guy pouring out the Busch Light. Idk if I should be proud or concerned. Oh well, I just love my @BuschBeer 🤷🏼‍♂️🍺

From 2003-13, the best high school righties rarely, if ever, turned out to be the ones taken at the top https://t.co/0qMG1MoJuN

Be patient, the timing of God is unbeatable 🙏🏾 minor setbacks for a major comeback!

Audio | Talking with NEW @LansingLugnuts OF Brandon Polizzi prior to today’s game against the Dayton Dragons!

I know we go through this every year, but Kevin Pillar may have figured it out.

Really liking what Urena is bringing to the plate the last few games. I was worried that he was not ready offensively to play everyday despite being a phenomenal hitter in the Minors. He has made some great adjustments of late and looking like he belongs at the plate#BlueJays