The Vancouver Canadians held its Media Day at Nat Bailey Stadium this week. It involved manager Dallas McPherson holding a press conference with the local media and the players getting their photos taken for used for the video scoreboard, game program and team website. Here’s a glimpse of what took place behind the scenes inside the stadium. Take a click around to enlarge any of the captioned photos.

Owen Spiwak gets his photo taken with Connor Laws looking on.

Tanner Kirwer and Josh Winckowski wait outside the photo area. 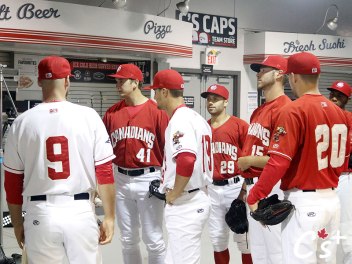 The players then went outside to take in the views of Nat Bailey Stadium. 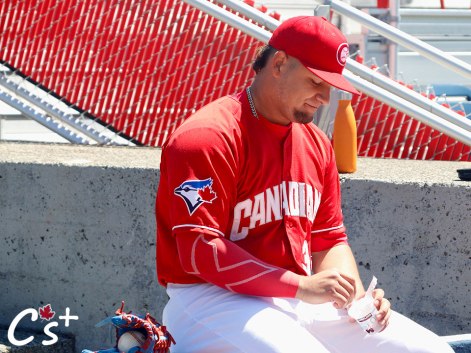 Denis Diaz (#22) and Sterling Guzman (#2) check things out from the stands. 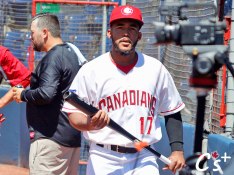 Jesus Navarro gets ready to head back to the dugout

Jordan Barrett steps onto the field. 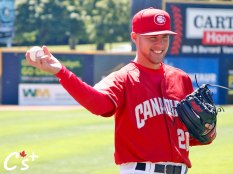 Juan Nunez takes a stroll in the outfield 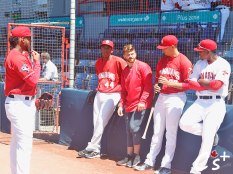 Opening Day starter Randy Pondler leans back and takes everything in.

McGregory Contreras with a bat in hand

McGregory Contreras gets ready to swing 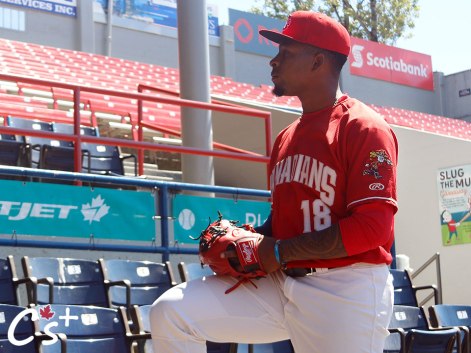 Owen Spiwak is interviewed by Steve Erickson of Sportwave

Randy Pondler tosses a ball in the air

Reilly Johnson gives a thumbs up to Media Day.

The players then returned inside for more video work.

The C’s begin a five-game series tonight at P.K. Park in Eugene to take on the Emeralds. All games can be heard on CanadiansBaseball.com with Rob Fai with tonight’s game and Tuesday’s series finale on TSN 1040 beginning at 6:00 pm with the pre-game show.

All the games can also be seen on MiLB.TV. Randy Pondler is expected to get the Opening Day start and Dalton Rodriguez will get the ball on Saturday. All games start at 7:05 pm except for Sunday which begins at 5:05 pm.

The Canadians will have more 2018 draft picks on the way to Eugene according to Rob Fai. The list so far…

This round of C-Tweets shares the spotlight on the Lansing Lugnuts as they clinched a first-half playoff berth in the East Division of the Midwest League.

There’s also a look at the Buffalo Bisons/Buffalo Wings new uniforms along with video interviews and observations of interest from or about C’s alumni and officials.

The newest Around the Nest: The differences in how each broadcaster perceives the draft, plus Riley Adams, Danny Jansen, Kevin Smith, Ryan Noda’s power surge and Buffalo’s Hawaiian Shirt Sundays!

Unpopular opinion: The last hour of college baseball has been more exciting than the entire NBA playoffs 🤷🏼‍♂️

Some #Bisons notes from the road…today’s starters Sean Reid-Foley and Taylor Guerrieri combined for 13.0IP, surrendering just 9H and 2R/ER. For Reid-Foley, it is his first career complete game as a pro. Just 3H, 1R/ER and just one runner in scoring position all game. #BlueJays

#BlueJays OF prospect Mc Gregory Contreras, ranked No. 50 by @BaseballTOR, will open the season with Vancouver. Loads up upside. Hit a couple of balls to the moon on the back fields in spring training.

🚨🚨 NEWS: Starting this Friday… the Lugnuts will be on https://t.co/rNFM3cXeQR! 🚨🚨

Colton Laws fired five scoreless innings for the second straight start, Samad Taylor came up huge, and the 40-24 Nuts knocked off Fort Wayne, 4-2, to punch a first-half ticket to the postseason!

LANSINGLUGNUTS: Not surprised at all based on their roster full of talent & heart… Congratulations to the @LansingLugnuts on clinching a trip to the post-season. Couldn’t be happier! #LugLife #DavePano pic.twitter.com/CVbg9jemyB

Video | With the 2018 MLB Draft in the books, our Lugnuts talk about their draft experiences! pic.twitter.com/7m5ahdf1uh

Charlotte brought Kiermaier and Hechavarria, so we’ll counter with a big name of our own tonight…

Grab tickets and come out to see the Stro Show: https://t.co/nanxgxYI08 pic.twitter.com/tDYACzGmIa

Former #ElonBaseball pitcher Jordan Barrett (2017 18th round draft pick) now appears on the roster of the Short-Season @vancanadians. They begin their season Friday.

He had a 2.80 ERA in Rookie ball over 11 games (5 starts) last year, and started in a AA game last month. pic.twitter.com/HHMRLEajyW

The squad tonight in Akron!

Our dude @just_watts25 ready to go to work this weekend for the @vancanadians! He starts his season on the road in Eugene Oregon. #BlueJays #LockedIn pic.twitter.com/0jHRQdkrAe

Every time I feel like I’ve been delt a bad hand, I remind myself that there are people out there that have it waaay worse than I do. Blessed & thankful for the life I live. 🙏