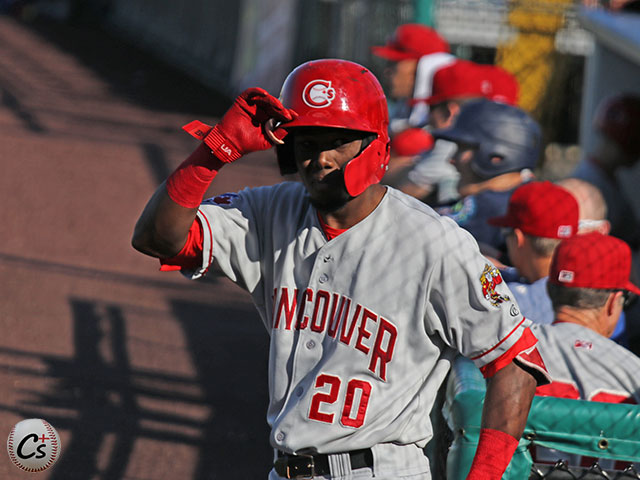 The Vancouver Canadians looked to be in position to pull one out against the Eugene Emeralds at P.K. Park but the rug was pulled out from under them in a 4-3 loss Tuesday.

Brian Rapp—a free-agent signing by the Toronto Blue Jays from the Frontier League’s New York Boulders—made his debut on the mound for the C’s and retired the first two men he faced. Rapp was a strike away from a perfect first frame but Sean Roby singled on a 0-2 breaking ball to right field. Armani Smith then doubled on a 2-2 breaking pitch off the right field wall to bring in Roby with the game’s first run.

Eugene would score again three innings later when Logan Wyatt led off with a double off the right-field fence and would score on a one-out Franklin Labour extra-base knock to right-center field with both hits coming on Rapp’s breaking pitches.

The Canadians broke through with their first run of the game in the seventh. In a Ryan vs. Ryan battle, Ryan Gold doubled down the right field line off Eugene reliever Ryan Walker with one away. Eric Rivera then blooped a two-out single to center over the head of Em’s shortstop Will Wilson to cash in Gold. By rights, Rivera should have been aboard on a four-pitch walk but home plate umpire Ray Patchen called an outside pitch a strike.

The Emeralds got that run right back in their half of the seventh inning when Wilson lined an Alex Nolan fastball deep over the left field fence on an 0-2 pitch.

Eugene would add another when Smith singled past a diving Luis De Los Santos at short with one out and Wyatt doubled to left-center to score Smith with Eugene’s fourth run.

Vancouver would fight back in the ninth when De Los Santos took lefty Chris Wright over the wall in left-center with one out to cut the Emeralds lead to 4-2. That was before Tanner Morris was caught looking on a 2-2 borderline pitch on the outside corner. Morris drew a line with his bat on the dirt indicating where he thought the pitch was before walking back to the dugout. The C’s kept the rally going when Gold worked his way aboard on a walk and that was followed by a D.J. Neal infield single to third when he chopped one off the plate. Rivera hit a soft liner to Wyatt at first base for the second out but Wyatt made a throwing error when he tried to double off Gold at second. Instead, the ball went into left field and that allowed Gold and Neal to move up an additional 90 feet.

Rafael Lantigua appeared to have tied the game when he grounded a supposed triple to the right field corner to score Gold and Neal. Lantigua would have been out at third but he knocked the ball out of Roby’s glove with his slide. Philip Clarke was in the batter’s box waiting for a chance to drive in Lantigua with the go-ahead run. However, Clarke did not get to swing the bat. Wright lobbed to ball over to Roby at third and he stepped on the bag for an appeal. The home plate umpire Patchen looked back at the Emeralds dugout before signalling an out at third. It almost appeared Patchen was asking for the approval of the home side before making the call. C’s manager Donnie Murphy argued the call and spike his helmet in frustration but the call stood to give the Emeralds the win. Neal did not touch third base on the way home and that’s why the Em’s escaped with the victory.

Lantigua’s game-tying triple was changed to a one-run double instead. He had the lone two-hit game for the Canadians. Eden and Gold reached base twice with a hit and a walk.

The Canadians had two runners on in the first inning when Clarke lined a single to left and Cameron Eden walked but Emeralds starter Kai-Wei Teng struck out Spencer Horwitz and got Morris to ground out to snuff out the rally.

Teng sat down 13 in a row before Neal reached on an error by Wilson at short in the fifth but Neal was thrown out trying to steal second base.

Vancouver loaded up the bases in the sixth when Lantigua singled with one out before Eden singled and Horwitz walked with two away but King got Morris to ground out to second for the final out.

Rapp took the loss but pitched five innings of two-run ball on six hits and two walks while striking out four. Nolan was touched up for the other two runs on five hits in 1-2/3 innings. Cobi Johnson stranded a runner for Nolan and yielded just a hit and a walk and had one punch out over 1-1/3 innings.

Before coming to Vancouver, Rapp was a teammate of 2019 C’s righty Mike Pascoe with the New York Boulders.

On the uniform numbers front, Rapp is wearing #17 and Nolan is wearing #19. Luke Gillingham had worn #17 before announcing his retirement. Number 19 became available when outfielder Tanner Kirwer called up to Double-A New Hampshire. Nolan had worn #33 for the C’s two years ago.

The series continues Wednesday. C.J. Van Eyk will climb the hill for the Canadians in a 7:05 pm start. The broadcast can be heard on CanadiansBaseball.com and seen on MiLB.TV.

Cavan Biggio (2016) walked, doubled and scored the winning run and Tim Mayza (2014) got the win with two strikeouts in a shutout inning as Toronto got by Miami 2-1. Former C’s skipper John Schneider (2011, 2014-2015) won his debut as major league manager filling in for the suspended Charlie Montoyo. The Jays skipper was given a one-game suspension and Alek Manoah (2019) was given a five-game sentence for plunking Mikael Franco during Saturday’s game in Baltimore.

Marcus Stroman (2012) walked two in a scoreless first inning but left the game due to left hip soreness in the New York Mets 3-0 loss to Atlanta.