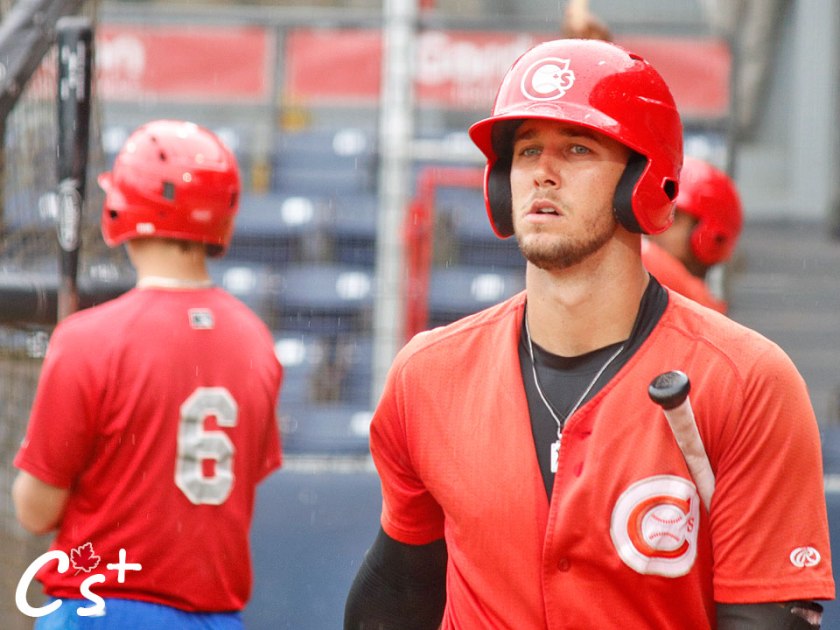 Jake Brodt homered and drove in the winning run in Boise Saturday.

The Vancouver Canadians did not let this one slip away in Idaho. They held off the Boise Hawks 9-8 at Boise Memorial Stadium Saturday. The C’s are back over the .500 mark at 15-14 and remain tied with the Everett AquaSox for top spot in the Northwest League’s North Division. However, Everett has the first-place tiebreaker for the first half division title with nine games left to go by virtue of winning four out of six against Vancouver.

The scoring began in the top of the second when Griffin Conine doubled to center and was joined on the bases when Nick Podkul walked. Podkul was forced out on the front end of a double play grounder by Bryan Lizardo that advanced Conine to third. However, the C’s would get on the board when Jake Brodt launched his first professional home run off Boise starter Jeffri Ocando to give Vancouver a 2-0 lead.

Boise cut into the C’s lead in the bottom of the second when Luke Morgan tripled and scored on a Juan Nunez wild pitch. Cade Harris drew a two-out walk but he was thrown out by Yorman Rodriguez behind the plate to end the rally.

Vancouver went back to work in the third when a double to left by Hunter Steinmetz and a double to right by Vinny Capra restored their two-run advantage. Rodriguez singled to left to bring home Capra and two more base hits to left by Conine and Podkul helped scored Rodriguez to make it 5-1 C’s.

Boise would mount a comeback despite the ejection of their coach in the fifth inning. Cesar Galvez was tossed for arguing balls and strikes when C’s reliever Denis Diaz rung up Hidekel Gonzalez. Diaz then picked off Daniel Jipping at second after he began the frame with a base hit and went to second on an errant pickoff throw by Rodriguez behind the plate. Just when it looked like things were settling down for Diaz, Matt Hearn singled to left and and Terrin Vavra singled to right to put runners at first and third. Vavra got to second on a wild pitch and Luis Castro was hit by a pitch by Diaz to load the bases. Danny Edgeworth lined a base hit up the middle to score a pair of runs before Diaz got Luke Morgan to fly out to right to end the rally.

The Hawks would even things up in the sixth when Harris got aboard on a bunt single to the mound before Jipping belted a two-run home run to right-center field off Diaz. Even though Diaz struck out a pair of batters in the inning, Hearn also reached on a bunt single and a passed ball by Rodriguez put the go-ahead run in scoring position. Diaz intentionally walked Vavra before Justin Watts came in to get Castro to fly out the right to keep the game tied.

After being unable to do anything against Hawks reliever Mike Bunal over two innings, the Canadians regained the lead in the seventh when Rodriguez singled and moved 180 feet on two wild pitches by Keinter Olivares in his second inning of work. Podkul would take Olivares deep for a two-out, two-run homer to left to put Vancouver ahead 7-5.

Vancouver added another two-out run in the eighth when Steinmetz walked, stole second and scored on an Otto Lopez base hit to center.

The Hawks refused to go away as they fought back with two runs in the bottom of the eighth. A Hearn double to left and a Vavra walk led to Cobi Johnson taking over for Watts on the mound. A Castro single to right plated Hearn and an Edgeworth double followed but Lopez, Podkul and Rodriguez teamed up on a 9-4-2 play to cut down Vavra at the plate. Castro got to third on the play and he would score Boise’s seventh run on a groundout to short by Morgan.

Hunter Williams started the ninth for Boise by hitting Rodriguez with a pitch. A one-out walk by Podkul and a bloop single by Lizardo loaded the bases before a Brodt fielder’s choice plated Rodriguez with Vancouver’s ninth run which was badly needed as Boise made another charge again in their half of the ninth.

The Hawks would load the bases with one out on walks by Harris and Gonzalez and a swinging bunt base hit by Hearn. Vavra would hit a tapper back to the mound to Johnson and he threw it home to force Harris at the plate. Castro would line a single to center to score Gonzalez and make it a one-run game and keep the bases loaded. Johnson would strike out Edgeworth on three pitches with Rodriguez hanging on to the foul tip to help the C’s escape with the victory.

Juan Nunez gave up a run over 3-2/3 innings in his first start of the season.

The C’s had their chances to break into double dights in the run column. McGregory Contreras was hit by a pitch and Steinmetz got aboard with a walk to start the fourth but Bunal shut the door after he relieved Ocando. Conine started the fifth with a single but was tagged out on a 8-4-3 play when he tried to get to second. Lizardo had a base hit later in the inning but he was left on base. The C’s had a chance to give themselves some more breathing room in the ninth with the bases loaded with two away but Contreras struck out.

Vancouver had 13 hits, four walks and two hit by pitches against eight strikeouts. They were 7-for-17 with runners in scoring position and left eight men on base. They were outhit by Boise 16-13 who were 5-for-19 with runners on second and/or third but they stranded a whopping 14 runners.

Griffin Conine came back from a night off with three hits for Vancouver Saturday.

Conine led Vancouver with three hits while Rodriguez, Podkul and Lizardo had two apiece. Podkul was on base four times by adding a couple of walks. Rodriguez reached base three times after a hit by pitch while Steinmetz singled and drew two walks to get aboard thrice. Contreras was the only Vancouver hitter not to get a hit but he did reach base on a hit by pitch.

Justin Watts picked up the victory in relief for Vancouver on Saturday.

Nunez gave up a run over 3-2/3 innings but Diaz gave up four over two innings. Watts improved to 2-0 as he pitched 1-1/3 innings of one-run ball on two hits and three walks. Johnson got the save despite two runs on four hits and two walks over the last two innings. Diaz had three strikeouts while Nunez, Watts and Johnson had two apiece.

The rubber match of this four-game series goes at 4:15 pm Pacific Time. Jose Espada (1-3, 5.24) gets the ball for Vancouver while Justin Valdespina (0-0, 0.00) starts for Boise. Rob Fai will have the call on CanadiansBaseball.com.

Here is the latest edition of C-Tweets that feature twitter comments, observations and video highlights about the Vancouver Canadians. A number of them have to do with the recent call up of 2012 C’s outfielder Dwight Smith Jr as well as some observations about the C’s in the podcast Around The Nest.

The Eastern League All-Star Game was this week and @tyler_zickel talks about how Davis, Romano, Biggio, and Zeuch did! https://t.co/AG60IsvrJ0

Joey Murray has a tremendous changeup–one of the best @RobFaiNation has seen in Vancouver. He “does textbook pitching,” and has recorded 14 strikeouts over 8 innings.

#TeamProgeny news on Griffin Conine: he gives fantastic defense in the outfield, has good range, a cannon arm, a great first step, and fantastic situational understanding. And at the plate, he is barrelling everything off the bat.

Reggie Pruitt: with his speed, he can run at any time, any count, but he needs to get onto base before he can use his speed.

Just like that, your #BlueJays have the lead! pic.twitter.com/yqc9ah0Y8t

And Jesse wraps up this week’s show with a story of his chance encounter with Tyler Warmoth.

We’re excited to announce we’ve extended our working agreement with the @BluefieldJays through the 2019-2020 season. pic.twitter.com/uBbcQZ4ngX

He started discussing the ’98 Falcons reaching the Super Bowl, which totally ruined the twenty years of therapy I’ve paid for since Gary Anderson missed that damn field goal.

On the #Bisons in the morning, hitting dingers at Fenway in the evening. Dwight Smith Jr. was 1-for-3, HR, R, 3 RBI, in the #BlueJays 13-7 win in Boston last night. pic.twitter.com/L3Fb4MtOSU

Also… I don’t care if scouts don’t like Dwight Smith Jr. every time we’ve seen him he has hit the ball hard and well. I like him a lot.

Are you watching the @BlueJays game right now?

2014 Canadians pitcher Tim Mayza gets the call to the hill for the #BlueJays vs #RedSox pic.twitter.com/sJzt9EzxPh

Big thanks to @ZLogue_17 adding another signature to the @UKBaseball draft ball. Huge upside for him! keep doing your thing brother! #goodluck #gocats #bbn pic.twitter.com/sYUx2KnRIy

SPORTS TURF: I have always been fascinated with the cut of field turf. Call this completely random but it’s such a beautiful artform when done well. pic.twitter.com/4lXEt13ALs