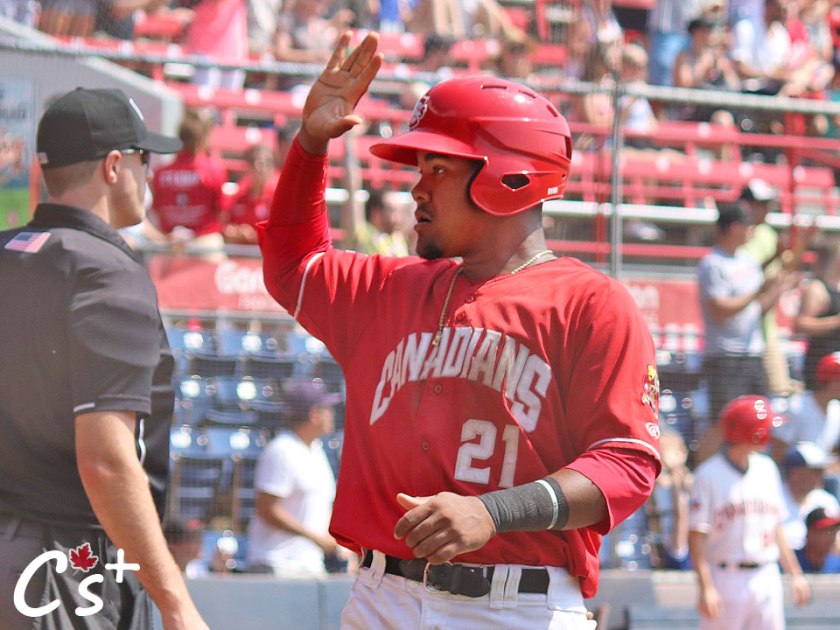 Otto Lopez had two hits and an RBI in Hillsboro Thursday.

The Vancouver Canadians dropped their second straight to the Hillsboro Hops 7-4 at Ron Tonkin Field Thursday. The C’s fall back to the .500 at 5-5 for the second half where they are tied with Tri-City and Everett and are one game back of Spokane.

Vancouver grabbed a 1-0 lead in the first when Otto Lopez hit a one-out double to left field off Matt Mercer before scoring on a two-out single by Bryan Lizardo to center. Jake Brodt followed with a ground-rule double to left and Jesus Severino walked to load the bases but McGregory Contreras struck out leave them loaded.

Hillsboro would answer back with two runs in their first at-bat as Jose Espada could not find the strike zone. He issued walks to Jake McCarthy, Geraldo Perdomo and Andy Yerzy but got a tapper back to the mound from Joey Rose to start a 1-2-3 double play. Espada’s hopes of getting out of the first unscathed disappeared when Francis Martinez ripped a double to right to score Yerzy and Rose.

The Canadians would take the lead again with three runs in the second. Nick Podkul lined a double to left field and Tanner Kirwer was hit by a Mercer pitch with one out. Lopez would flare a double to center to score Podkul to tie the game and move Kirwer to third. Kirwer would come in to score on a wild pitch to give Vancouver the lead. Lizardo had Vancouver’s third double of the inning to center field to score Lopez to increase the lead to 4-2.

The Hops would even things up in the fourth when Martinez singled to right and loaded the bases with a one-out walk to Ryan January and a single to left by Keshawn Lynch. Martinez would score when Brodt booted a ball at first that allowed Jorge Perez to reach base. McCarthy score would bring in January with a sacrifice fly to center with the tying run.

Hillsboro would break the tie in the fifth when Yerzy led off the inning with a home run to right field off Espada. Another home run to right off the bat of Perdomo against Denis Diaz came in the seventh inning.

The last run of the game came in the eighth when William Gorman hit a leadoff triple to center and scored on a Connor Law wild pitch.

Bryan Lizardo had two hits and two RBI for the Canadians Thursday in Hillsboro.

The Canadians only had three runners on base for the final seven innings. A Severino leadoff double in the third, one-out double by Brodt in the eighth and an error by Rose allowed Podkul to reach base to start the ninth. The C’s were 3-for-15 with runners in scoring position with seven men left on base. They had eight hits, one walk, one hit by pitch and struck out nine times. Lopez, Lizardo and Brodt had two hits apiece.

Espada did not pitch like the Northwest League Pitcher of the Week as he gave up five runs in five innings. Only three of the runs were unearned but he had a game WHIP of 2.00 with six hits and four walks to go along with four strikeouts. Diaz gave up one other hit and a walk in addition to a home run over two innings. Law struck out the side but gave up a run on a triple and a wild pitch.

One defensive  highlight for the C’s was catcher Yorman Rodriguez picking off Rose at first base after he had singled in the seventh.

The middle game of this five-game set will be played Friday. Luis Frias (0-1, 2.08) will throw the first pitch for Hillsboro at 7:05 pm. Lefthander Randy Pondler (2-4, 3.86) will be on the mound for Vancouver. Rob Fai will have the broadcast on CanadiansBaseball.com. The game is also available on MiLB.TV.

The Cardinals released minor league outfielder J.B. Woodman yesterday. He was traded from Toronto for Aledmys Diaz and was hitting .246/.318/.373 with 106 strikeouts in 68 games in Advanced-A.

WWE: Jim Ross Voice “Well it looks like business is about to pick up here!” Congrats to Kane on becoming the Mayor of Knox County, TN – Love this!

Would love if every time he walked into City Hall, this… pic.twitter.com/vLKnVcECPk

*talking about fishing*@joshwinckowski : “That’s because you’re a catch.”

He laughed for 10 minutes about that joke. #GoodTeammateTBJ

I’m starting to think there’s a lot I don’t know.
This one doesn’t surprise me, though. Young is so fast, he hit a line drive up the middle one time, and it just missed his head as he rounded 2nd. Or so I’m told. https://t.co/ZKgvrKWyf5