The Vancouver Canadians held off the Salem-Keizer Volcanoes at Volcanoes Stadium for a second straight night with an 8-5 victory Saturday. The C’s are the first team to 10 wins in  the second half and their 10-6 record keeps them one game ahead of Spokane and Everett for first place in the North Division.

The C’s scored first for the third straight time in the series but the two-out rally began under ominous circumstances. Griffin Conine lined a shot off the head of Salem starter  and that forced the exit of Santos on a stretcher.

After a 20-minute delay, Yorman Rodriguez belted his first home run of the season on the second pitch of the game from Miguel Figueroa to provide the C’s with a 2-0 lead.

T1| Gregory Santos was struck by a 105 mph line drive up the middle and was carted off the field. After that, Yorman Rodriquez hit a 2-run HR so the @vancanadians lead 2-0 heading to the bottom half

Update: Salem-Keizer manager Hector Borg said #SFGiants No. 14 prospect Gregory Santos is “going to be OK,” after being struck in the head by a line drive. The right-hander will be placed in the seven-day concussion protocol. https://t.co/CdAbefhFQS pic.twitter.com/b4xpW2DDPn

Vancouver doubled its lead in the second when McGregory Contreras led off with a single and Brandon Polizzi walked with one away. A passed ball by Joey Bart and a walk to Otto Lopez filled the bases. Tanner Kirwer scored Contreras with a sacrifice fly before Figueroa’s errant pickoff attempt brought in Polizzi with Vancouver’s fourth run.

Salem-Keizer was able to solve Vancouver starter Jose Espada in the fifth. Jett Manning worked a leadoff walk and moved up on a Diego Rincones hit by pitch and a Joey Bart fielder’s choice. Manning would come in to score on an Espada wild pitch. 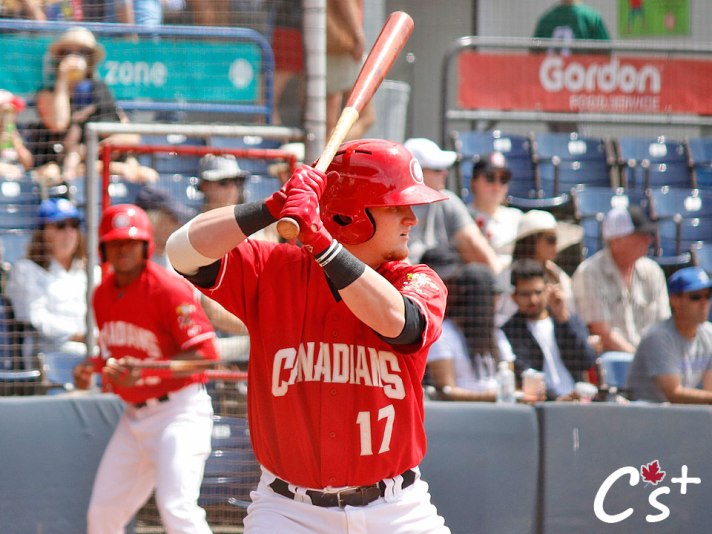 Brett Wright went deep for the fourth time this season in Salem-Keizer Saturday.

Vancouver would go ahead by four runs again in the sixth when Brett Wright whacked one over the left field fence for a two-strike, two-out home run for his fourth home run of the season.

The Volcanoes would score again in the sixth when Aaron Bond was sent to first base on a walk by Troy Miller. Dalton Combs kept the inning going by taking one for the team with two outs before Manning singled to left to score Bond. Miller escaped further damage when Sterling Guzman made a diving stop to his right at second on a ground ball by McPherson and flipped it to Lopez at short to force Manning at second to end the threat. 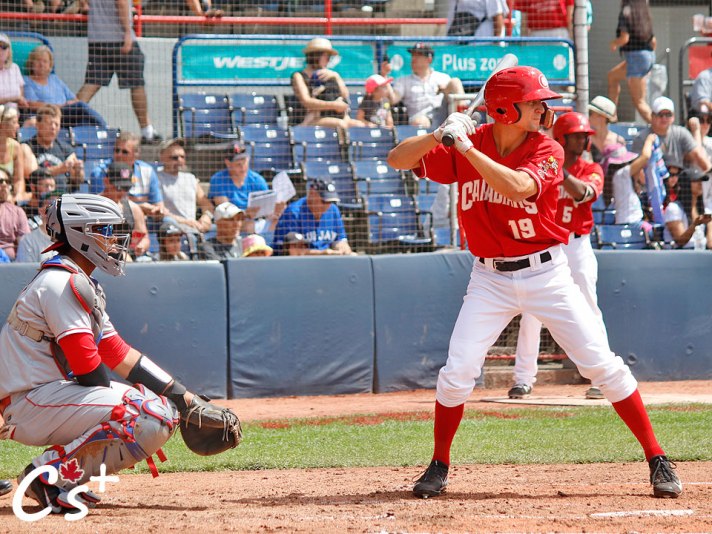 The Canadians would expand their lead in the seventh when Lopez laid down a bunt single against Volcanoes hurler Trevor Horn. Lopez would score all the way from first on a Kirwer double to center. Kirwer would steal third and come in to score on a throwing error by Manning at short after nearly getting picked off.

Miller was back out on the mound in the bottom of the seventh but he did not retire any of the three men he faced. Bart singled to right to score a Rincones leadoff double before  David Villar doubled to right to bring in Bart. Joey Pulido relieved Miller and got Bond out on strikes before loading the bases on a Robinson Medrano walk and a Ricardo Genoves plunk. Combs hit into a 3-6 fielder’s choice to that scored Rincones to make it a 7-5 game. Pulido would strike out Manning to send the game into the eighth.

Polizzi would find his way on base on an infield single to third off Salem hurler J.J. Santa Cruz. A Santa Cruz error on a pickoff attempt, a Lopez infield single to short and a Kirwer sac fly to right allowed Polizzi to score the eighth Vancouver run.

Pulido got the ball to Cobi Johnson in the ninth and he picked up the save to finish a game that clocked in at three hours and 44 minutes. 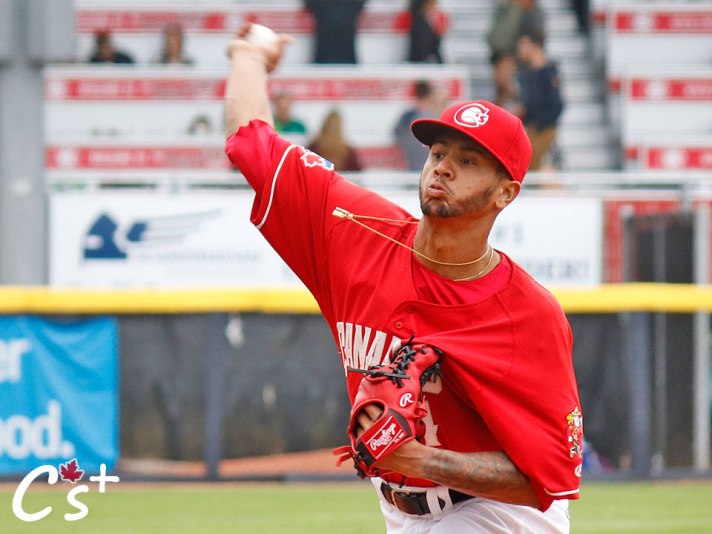 Jose Espada allowed just five men to reach base over five innings to earn his third victory of the season.

The Canadians racked up 13 hits and four walks and only went down swinging five times. They were 2-for-7 with runners in scoring position with seven men left on base. Conine had a double and two singles to lead the way. Lopez reached base three times with two hits and a walk. Also getting two hits were Rodriguez and Contreras. Kirwer had a double, two sac flies and three RBI and added his 24th stolen base of the year. That ties him with Eugene’s Fernando Kelli for the league lead in swipes. Every C’s hitter got on base by a hit or a walk with eight players recording a hit.

Joey Pulido earned his second hold of the year and has given up just two unearned runs over 14-2/3 innings for Vancouver this season.

Espada yielded just one run on two hits, two walks and a hit by pitch over five innings to get the win. Miller was roughed up for four runs over one-plus innings on four hits and a walk. Pulido allowed an inherited runner to score but put up two zeroes on his ledger while walking one and striking out two. Espada, Miller and Pulido all plunked a batter. Johnson struck out the side but one of those strikeouts came when Christopher Bec—who replaced Wright behind the plate in the eighth inning—made a throwing error that allowed Medrano to reach base with one out. Johnson shook that off with a strikeout of Genoves before retiring Combs on a fly ball to center. 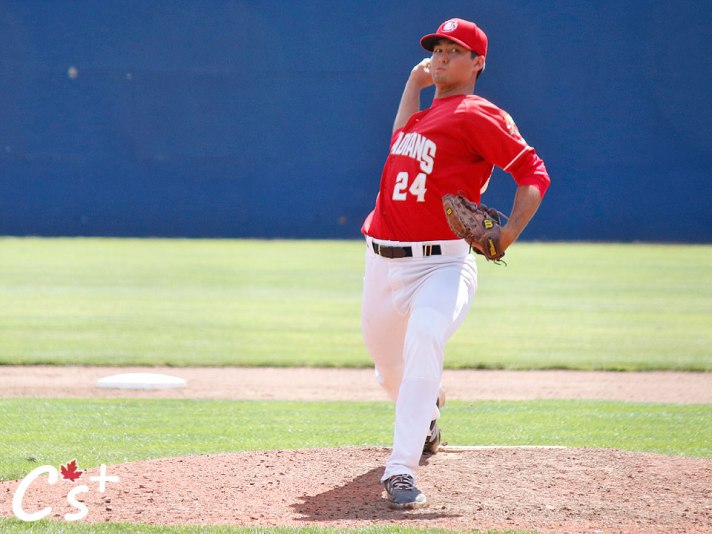 Cobi Johnson’s eight saves leave him one back of the Northwest League lead.

Congratulations to 2014 Vancouver Canadians pitcher Sean Reid-Foley who has been promoted from the Buffalo Bisons and is expected to start in Kansas City Monday. Reid-Foley was on the C’s playoff roster four years ago but did not appear in a game.

#BlueJays calling up Danny Jansen, per multiple industry sources. Also sounds like Sean Reid-Foley will get the ball Monday in Kansas City.

The C’s and V’s square off in the fourth game of this five-game series Sunday. You can tune in to CanadiansBaseball.com as Rob Fai will have the call for you at 5:05 pm. The lefthander Randy Pondler (3-4, 3.26) is the scheduled starter for Vancouver. A starter has not been named yet for the Volcanoes.

📽️: #Bisons lead the Hens 4-1 after 6. @dsmith25blujay plates a pair with this single in the second inning. #BlueJays pic.twitter.com/P9Vg6iD7PE

📽️: #Bisons lead the Hens 4-1 after 6. @dsmith25blujay plates a pair with this single in the second inning. #BlueJays pic.twitter.com/P9Vg6iD7PE

Josh Palacios starts off today with a double and a single, extending his hitting streak to 13 games, the longest by a Dunedin Blue Jay this season! He’s hitting .411 during his hot stretch!

His 13-game hitting streak is the longest active streak in the FSL! pic.twitter.com/ZmsfRbqwuR

CYCLE WATCH: #BlueJays prospect Joshua Palacios is 3-for-3 and a triple shy for @DunedinBlueJays in the sixth inning.
Gameday: https://t.co/1syFnF6XYz pic.twitter.com/tjdDxdkREj

When you’re running through your weekend and you realize that tomorrow is Monday 😲 #AtTheNat pic.twitter.com/lNZxZNezAG

Congratulations on your call-up to the #BlueJays Sean Reid-Foley! pic.twitter.com/ZBXibteViG

Wishing a speedy recovery to Gregory Santos from @SKVolcanoes. https://t.co/0nPAu3H6Qo

Reggie Pruitt’s first homer of the year was a 🚀 last night #LugLife pic.twitter.com/4Advh8J853