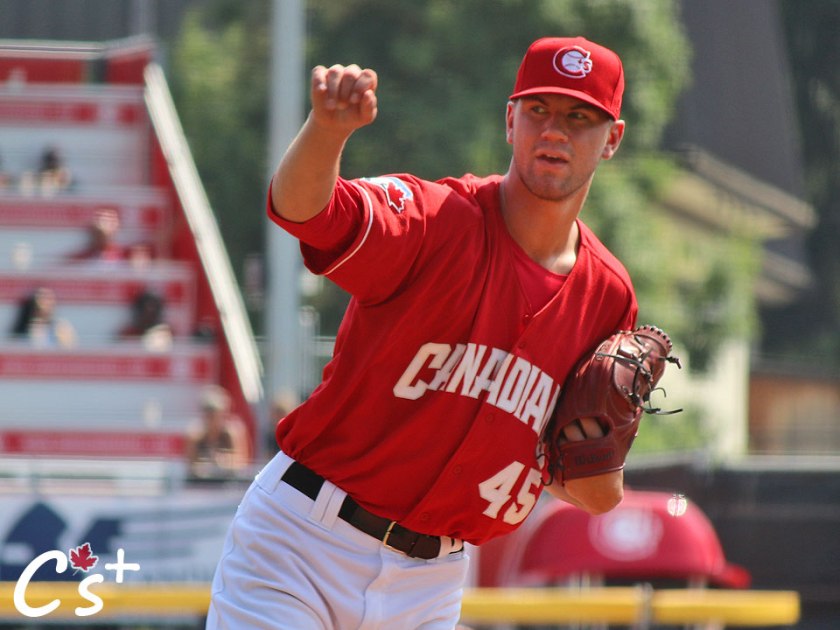 Fitz Stadler won four of his six decisions between Bluefield and Vancouver in 2018.

2018 Vancouver Canadians pitcher Fitz Stadler is the latest to take the ball in this edition of C’s Chat. The 6-foot-9 righthander from Glenbrook, Illinois had an opportunity to join the team he rooted for as a youngster when the Chicago Cubs selected him in the 32nd round of the 2015 MLB draft.

The Cubs decided to take a flyer on Stadler four years ago after he rung up 102 batters in 60-1/3 innings in his senior season. He won eight of 11 decisions to go with an earned run average of 1.22 with Glenbrook South High School. A three-time letter winner in baseball and a two-time letter winner in football, Stadler captained both teams in his final year of high school. That earned him numerous awards including Perfect Game All-American Honorable Mention and All-Midwest Region First Team honours. Perfect Game rated Stadler as the second-best prep pitcher in Illinois.

Stadler also turned in a dominant junior campaign by going 9-0 with a 0.69 ERA with 49 strikeouts in 39-2/3 innings and also captained the football team in 2014.

The Glenbrook South High School product was honoured to be taken by the Cubs but he decided to go to college instead.

“Just coming out of Chicago, it was very special to be drafted by the Cubs, very thankful that they gave me that chance but I chose to go to school and that was a lot of fun as well.

Coming to the Blue Jays organization, it’s been very special for me as well. Definitely different than the Cubs but I really like it out here. Vancouver’s awesome. It definitely was difficult but I chose the right path and now I’m here with the Blue Jays.”

Former major leaguer Steve Stanicek coached Stadler during his high school days with the Glenbrook South Titans. Stanicek praised Stadler’s athleticism and work ethic in this story from The Chicago Tribune as well as his ability to control the running game, pick runners off and field his position. The Daily North Shore also quoted Stanicek as saying Stadler has a “professional arm” with a smooth and easy delivery.

The author of a five-inning no hitter with 11 strikeouts, Stadler would go to college but he decided to break a family tradition in the process. His father Matt was an All-American swimmer at the University of Indiana and his brothers Walker and Sullivan pitched for the Hoosiers. Instead, Stadler decided to become an Arizona State Sun Devil.

“It was a pretty tough decision for me but at the end of the day, I knew I made the right one. I really liked going to Arizona State and playing in front of that kind of crowd. Arizona has the same kind of baseball culture as here (Vancouver). There’s a lot of fans that really love baseball. (Laughs). If you kind of screw up, there’ll be right behind you but in some cases, they’ll be hard on you. I really like out it here, there’s a lot of great fans that have your back so it’s nice.”

Two people that had Stadler’s back all along were his brothers, sibling rivalry and all.

Running With The (Sun) Devils

Stadler made 27 of his 31 appearances with the Sun Devils in relief and though he struggled with a career ERA of 6.62 ERA, Arizona State pitching coach Mike Cather praised Stadler’s athletic ability by noting the Sun Devils used him as a pinch-runner.  He also lauded Stadler’s arm and pitching frame and felt he could start or relieve.

The Toronto Blue Jays saw the same things as Cather did and proceeded to draft Stadler with their 18th round pick in the 2018 draft. Stadler says he privately celebrated the moment at home.

“It was kind of low-key. I was with my parents and we were just at home. We were just hanging out and I was watching the draft. It was the third day and it was just special for them to give me a chance and I’m kind of living out my dreams so it’s definitely a big step in the right direction.”

Stadler received a $100,000 signing bonus from the Blue Jays after he was signed by scout Darold Brown. The Appalachian League would be Stadler’s first professional assignment.

Fitz Stadler delivered 12 scoreless appearances in his 16 games out of the bullpen for the C’s in 2018.

The fun began for Stadler in his professional debut when he pitched a scoreless inning with two strikeouts against Johnson City June 20. Stadler would earn his first professional win in his next outing with 2-2/3 innings of shutout ball in Burlington June 22. He found the win column again against Burlington in his fourth appearance July 2 by striking out six over three shutout innings.

Stadler did not give up a run in his first nine innings of pro ball and allowed just one run over 11 innings.  He struck out 14 batters and walked only three while posting a 0.79 ERA.

One thing was clear—Stadler was too good for Appalachian League hitters who batted just .150 against him. He began to receive an inkling that a promotion was due.

“It was kind of funny. Throughout the day, the pitching coach was kind of hinting at it like ‘Hey, have you ever been to the Northwest?’ and they played a couple of songs where it was kind of like hinting at it. Everybody was like, ‘Hey man! You’re going to go up!’ I was pretty happy to get the call and just be in the locker room and having your teammates support you and say congratulations to you. It was very special.”

Even though he received his first promotion to Vancouver, he was somewhat sad to leave Bluefield behind.

“Definitely mixed feelings. We were having a good time, we were playing well. The coaches there were great and they were great with the promotion and everything like that but I was kind of sad to leave that team because we were having such a good time winning and playing good baseball.”

One thing Stadler had to adjust to was pitching in front of the much larger crowds at Nat Bailey Stadium as compared to those at Bowen Field.

“Definitely different. Definitely different crowd. I mean, it’s a lot of fun playing here (in Vancouver). There’s a lot of energy and I love it out here. It’s definitely a very welcoming crowd to the Blue Jays and the Vancouver Canadians and I really like that. When you hear them rooting for you and knocking down the other team, it’s pretty funny but at the same time, you kind of got to block it out and just zero in on your craft.

I feel like as soon as I come out of the pen, I’m already pitching on the mound, I kind of like zero in on my own thing. I don’t really hear much other than like loud cheers when it’s going the right way but it’s definitely very good to have this crowd on your side.”

Fitz Stadler induced ground balls at a 52 percent rate with the C’s in 2018 according to FanGraphs.

Stadler tossed a shutout inning in his C’s debut in Boise July 11. That was the start of five scoreless outings to begin his Vancouver tenure. Included in that run was three shutout innings in which he struck out four against Hillsboro July 19.

The only run Stadler surrendered in July came when he was tagged with an extra-inning loss in Everett July 25. The new overtime rule implemented by Minor League Baseball for 2018 meant he had to deal with a runner in scoring position before even throwing a pitch in the 10th inning.

“Once the guy’s on second, you kind of have the wherewithal that they might bunt. So once they might bunt, that guy is going to get moved over to third or if you get the chance to get (the runner) out, you can. But once he’s at third, when I’ve been in, we usually have walked a guy or put a guy on with four pitches on purpose so then we could get the double play chance after the one out. It works sometimes in your favour but it’s kind of challenging.”

Stadler would collect his first win with the C’s in Salem-Keizer August 12 and followed up with his second win by getting an inning-ending double play ball against Spokane August 19.

The game plan for Stadler every time he is on the mound is to be aggressive and keep the ball down.

“I usually just try to attack the hitter early. I’ve been told I have a very downward plane or downward angle towards the hitter and towards the strike zone which helps a little bit. Obviously having a great infield behind me, it’s definitely a blessing. Every time I get a ground ball, it’s kind of like, ‘Oh, I got the confidence that they’re going to make the play, they’re going to get the out.’ It’s very nice to have them behind me.”

Stadler employs a two-pitch mix to deal with hitters.

“People kind of call me a sinker-slider guy. I throw a lot of two-seams (fastball) to my arm side and a lot of sliders to my glove side but I usually just try to attack early and get a ground ball and have my teammates right there behind me.”

One challenge for tall pitchers is to keep his mechanics in check with his long levers which can affect a pitcher’s release point but Stadler was able to make progress on that front towards the end of the season.

I feel it’s just being more comfortable with the things that I have and just playing baseball to my strengths. Really just attacking hitters and once you attack hitters and you trust your stuff, you kind of just let them put the bat on the ball and let themselves get out.”

The number two dominated Stadler’s final line with Vancouver as he would finish with a 2-2 record, a 2.22 ERA and 22 strikeouts against nine walks over 24-1/3 innings.

Speaking of twos, Stadler will turn 22 years old on April 2. That will be two days before the start of the 2019 minor league season. It’s expected he will be with the Lansing Lugnuts who open their season in Fort Wayne.

Thanks once again to Fitz Stadler for pitching in for this edition of C’s Chat which was arranged again by C’s Media Relations Assistant Sharlene Canning. For more on Stadler, check out the video below from CTV Vancouver.