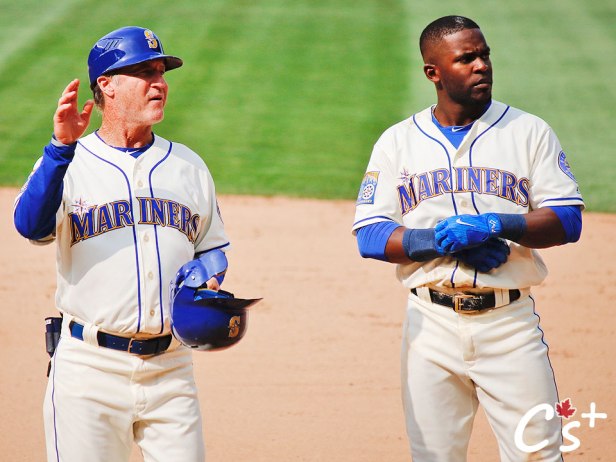 Casey Candaele (left)—pictured here with outfielder Guillermo Heredia as Seattle Mariners first base coach in 2017—is the new manager of the Vancouver Canadians.

The Vancouver Canadians will have a former Montreal Expo leading the way. The parent club Toronto Blue Jays announced Thursday that Casey Candaele will be the manager for Monty’s Mounties in 2019.

Celebrating his 58th birthday January 12, Candaele completed his first year in the Toronto system as manager of the 2018 Dunedin Blue Jays where he led them to an above .500 finish at 69-68. Before that, he was first base coach of the Seattle Mariners in 2016 and 2017 where he appeared to enjoy his time there despite having to take one for the team in the first base coach’s box.

A free-agent signing by the Montreal Expos in 1982 from the University of Arizona, Candaele made his major league debut on June 5, 1986 at Olympic Stadium against Philadelphia. He collected his first big league hit by doubling off the Phillies Dave Rucker two days later.

Candaele retained his rookie eligibility in 1987 and clubbed his first major league home run against Rick Mahler July 19. The game-tying eighth-inning blast forced the game into extra innings where the host Expos prevailed over the Atlanta Braves. Candaele compiled 23 doubles and four triples to go along with a .272 batting average in 1987 and placed fourth in National League Rookie of the Year voting, won by San Diego Padres catcher Benito Santiago.

A tough start to the 1988 season saw the Expos trade Candaele to the Houston Astros for catcher Mark Bailey. He hit .172 with the Expos but did not fare any batter in the Lone Star State with a .161 batting average. Candaele would resurface with the Astros in 1990 and spend four seasons there. His first season was his best when he batted .286 with a career-high OPS of .761.

Candaele signed as a free-agent with the Cincinnati Reds and Los Angeles Dodgers but he would not get back to the bigs until he joined Cleveland where he played a total of 38 games over the 1996 and 1997 campaigns.

Baseball was in the blood for Candaele as his Vancouver-born mother Helen Callaghan was a player of great renown in the All-American Girls Professional Baseball League where she was known as the Ted Williams of women’s baseball. She was among the 64 Canadian-born players inducted in the Canadian Baseball Hall of Fame.

Wow this is huge for the C’s. Super knowledgeable guy, plus already has a nice Vancouver connection especially with his mom and aunt.

The assignment to Vancouver should prove interesting for Candaele as he returns to his late mother’s hometown and may get to re-live his Expos days should the C’s introduce an Expos-style throwback uniforms for a third year in a row. Candaele takes over for Dallas McPherson as he has been promoted to Lansing.

Dallas McPherson is moving on to the Lansing Lugnuts after managing the C’s in 2018.

Joining Candaele on the C’s coaching staff is pitching coach Demetre Kokoris who looked after the pitchers at NCAA Division II Point Loma Nazarene University. The 35 year-old Kokoris tweeted about his new job just over a week ago so that was an early indicator long-time pitching coach Jim Czajkowski was not returning to Vancouver. Czajkowski will be the pitching coach for Dunedin instead.

Jose Mayorga will move to the Dominican Summer League to take over as manager in 2019.

The other new addition to the coaching ranks is position coach Danny Canellas. The 23 year-old from Caracas, Venezuela first joined the Blue Jays organization as a free-agent signing October 9, 2017. His Baseball Reference page shows Canellas was a catcher in the Los Angeles Dodgers system in the Arizona League in 2014 and 2015. He also made two appearances as a pitcher in which he recorded three outs. Canellas was assigned to the Gulf Coast League, Lansing and Dunedin but never saw any playing time. He takes over for Jose Mayorga, who will get his first managing gig with the Dominican Summer League Blue Jays after spending the last two years in Vancouver.

Aaron Mathews is the lone returnee to the C’s coaching staff in 2019.

The lone holdover from 2018 is hitting coach Aaron Mathews. The 36 year-old spent seven of his eight minor league seasons in the Blue Jays system, reaching Triple-A in 2009. He was drafted by Toronto in the 19th round in 2004 out of Oregon State University.

Jim Czajkowski will be overseeing the development of Dunedin Blue Jays pitcher in 2019.

Tickets are still available, so don’t miss out on this opportunity to learn more about Cito!https://t.co/QS9XMUph6u

It’s been a busy off-season for those connected with the Vancouver Canadians. Among the top headlines were former C’s skipper John Schneider joining the Blue Jays coaching staff, the Giants claiming 2015-2017 leftyhander Travis Bergen in the Rule 5 draft and fireballer Nate Pearson lighting up the radar guns during the Arizona Fall League. The following is a collection of tweets made by former and current C’s or about them over the last few months.

This week’s match up is a pair of lefties, who has the best #RestingPitchFace?

Thank you to the @DunedinBlueJays for volunteering at @MetroMinistries Tampa today! We appreciate your service across our campus this afternoon 💙 #BeHope pic.twitter.com/MDJ19XDVdQ

Wrote about Brock Lundquist and his amazing second half earlier today: https://t.co/ms5yNOYcwp

The Blue Jays kept Joey Murray’s innings to a minimum this year. Can’t wait to see how he fares against higher level competition in 2019:https://t.co/ms5yNOYcwp

Had a great time writing this piece about ⁦@chavezyoung242⁩ (who is criminally underrated) w/ help from ⁦@jgoldstrass⁩ ⁦@FutureBlueJays⁩ and ⁦@premier_sox⁩ Chavez Young: The 2018 Breakout Nobody Is Talking About – Baseball Farm https://t.co/GqNbL7bVC3

Jonathan Davis and Jon Berti both hit for the cycle in 2018, but we didn’t lose either of those games.

Both of those guys made their MLB debuts later that year after 5+ seasons of MiLB grinding. Man, what a year.

Sorry what was the question again? https://t.co/v4JuvZm2Kd

We just signed one of the best teammates I’ve ever had! I couldn’t be more excited about this!
Welcome to The @Twins @ncboomstick23

BLUE JAYS: What am I missing here? Toronto loses Jordan Romano AND Travis Bergen to Rule 5. Romano was EL Pitcher of the Year, Bergen, now healthy, is as good a lefty as I have seen since Nicolino (‘11) and just like that, gone? Again, not to throw shade but what am I missing? pic.twitter.com/wzFU1UyqC1

Best of luck to a pair of outstanding pitchers and people as they join new organizations! #Rule5Draft #MissYouAlready pic.twitter.com/BoEQCLkR1v

Had a look at some Vancouver prospects, here’s the updated link: https://t.co/KEIWSqyNJr

Latest post – A Look at Otto Lopez, and under the radar type of prospect:https://t.co/ms5yNOYcwp

I’ve been watching (and re-watching) video from Vancouver’s 2018 season….and a few things stand out.
-Otto Lopez is one of those, get on base, play multiple positions, high baseball iQ guys. More of a contact/spray hitter at this point.
1/2

Y’all need to tip my guy @marcusreyes03 the boy is grinding for @dominos out there in the rain!!! #Grinder

Pretty cool night getting to be an ambassador for Kidsport along with many olympians! Do it for the kids! https://t.co/BxQKh1YEgL

Oh, baby, what a day for former @FisherCats manager John Schneider I State of Sports https://t.co/lNuoek5HhN via @603SportsMedia

The @BlueJays new hitting coach Guillermo Martinez was #AtTheNat in 2013 to see the Canadians win our 3rd Northwest League Championship in a row! pic.twitter.com/sg4KFemVWh

Had a chance to talk to the Blue Jays Manager of the Future: https://t.co/Pts3beHSUk

Best news of the off-season! …and he just had his second child with his wife Jess. Couldn’t be happier for the former @vancanadians manager!!! https://t.co/m985qTklb6

You can’t really overstate the 2018 Patrick Murphy had…..59% GB rate, 10.4% SwStr, average velo probably in the mid 90s. Added 5-6 mph on his curve, and more importantly, began to trust and use his change more. It’s the devo of that pitch that will dictate how high he goes.

Congratulations to Patrick Murphy (‘16) on being added to the @bluejays 40-man roster. #AtTheNat pic.twitter.com/mrCElnGu4V

Proud to announce that I have hung up the cleats and switched teams to the Smith and Bush team with Hunt Realty!

I couldn’t be more excited about this amazing opportunity, and I’m looking forward to helping families find their dream home! 🏡 pic.twitter.com/FXQhg9Poqe

15 months post op and my shoulder is finally starting to feel semi normal again. Can’t wait to see what -8 months feels like. #NeverOver

#BlueJays No. 4 prospect Nate Pearson showed the highest ceiling of any pitcher that Mike Rosenbaum saw in the @MLBazFallLeague … and yes, that includes #MLB‘s top-ranked pitching prospect. More from @GoldenSombrero: https://t.co/mnh3uQiFWK pic.twitter.com/5yNX3Cb70U

Baseball is a Very small world! Turns out that Nick Punto and I are staying at the same hotel and both love to golf! @twins pic.twitter.com/swEitYLqPU

Can’t thank my left hand enough for staying by my side #Deezington pic.twitter.com/JrNZ83sed5

Not sure why there is a huge fuss about the jerseys. The fact that ND got the rights to imitate one of the greatest franchises in sports is amazing. I’m not a Yankees fan but good job ND! Out with the gold helmets…. @ me. Pinstripes are swag #ShamrockSeries2018 pic.twitter.com/bOC4JLAZLW

WELLAND – The Welland Jackfish, members of the @IBL1919, are pleased to announce the signing of Mattingly Romanin for the 2019 season.

15 months post op and my shoulder is finally starting to feel semi normal again. Can’t wait to see what -8 months feels like. #NeverOver

Congratulations on an incredible career Joe! It was a privilege to share a dugout with you. Enjoy retirement #Respec7 pic.twitter.com/YllCdTvXtw

From the Blue Jays,
The centre fielder,
Number 11,
Kevin Pillar!

#BlueJays Cavan Biggio continues his 🔥 stretch at the plate. He has hits in seven of his past eight games after this single up the middle. Biggio also turned in his first three-hit game of the @MLBazFallLeague yesterday. @MLBPipeline pic.twitter.com/3tIRvVz5q9

Man I love this game! Had a blast playing with MLB’s future stars! West team on top though!🌵🔥 pic.twitter.com/zSVrSer7Uf

Can’t tell you how long I’ve wanted to make it onto @PitchingNinja twitter! #letiteat🔥 https://t.co/8NUihnEfVy

Pearson opens with this. Scout behind me 102 pic.twitter.com/IAsuZlmABS

#BlueJays Nate Pearson is the hottest arm I think I’ve ever seen.

Everyone views Nate Pearson as potential top-of-the-rotation material if everything clicks, but the best part about seeing him air it out in a short stint tonight might be that the floor is dominant high-leverage reliever. That’s not too shabby in this super bullpen era.

My dad is the first hitter. Lmao https://t.co/T0UmpOy7Dn

My dad is the first hitter. Lmao https://t.co/T0UmpOy7Dn

The best power hitter in the Blue Jays’ draft class?

Some Nate Pearson bullpen video, if you’re into that sort of thing. I know you are. #BlueJays pic.twitter.com/rUMrxoAZn3

Thank you to the Fans and city of Vancouver for voting me as their favorite player of 2018 couldn’t be more honored and proud to represent Vancouver Canada!… https://t.co/A83LnmygPY

Congratulations to both @big_nate5 and @doinitBIGgio23 for being selected to play in the @MLBazFallLeague Fall Star Game.

The Fall Stars Game will be at 8 PM EST on Saturday, November 3rd.https://t.co/NHVFVmfikK pic.twitter.com/ttOUwFVTV5

When @WayneTwentyOcho rehabbed with the @FisherCats in 2017, he went 0 for 3 in a game that didn’t matter to him. We ended up winning in a walk off, and he was right there with us in the dog pile. The guy wants to win and loves the game, cool dude. #MVPearce https://t.co/nyadC4JPzE