Cobi Johnson was one of three Vancouver Canadians selected to take part in the Northwest League/Pioneer League All-Star Game in 2018.

There are quite a few father-son connections throughout the Toronto Blue Jays farm system. There’s Vladimir Guerrero Jr. and Sr., Bo Bichette and Dante Bichette, Dwight Smith Jr. and Sr., Kacy Clemens and Roger Clemens and Griffin Conine and Jeff Conine among others. 2017 Canadians closer William Ouellette is the son of former San Francisco Giants catcher Phil Ouellette and the father-son closer combo continues in 2018 for Vancouver. Cobi is the son of Dane Johnson, a former Toronto Blue Jays pitcher and current bullpen coach.

Cobi Johnson was drafted by the Blue Jays in the 30th round of the 2018 draft out of Florida State. The 22 year-old righthander reported to Vancouver to begin his pro career and became a key part of the Canadians bullpen, eventually earning the closer’s role. The Holiday, Florida native’s efforts were recognized when he was named a Northwest League All-Star for the league’s annual game against the best of the Pioneer League in August.

Johnson said he found out the good news from C’s manager Dallas McPherson.

“We had a team meeting and he got everyone together and he announced it. I was kind of surprised to be honest with you but I’m happy. I told my parents and they are happy for me too. Even when the meeting was called, I knew I was putting together a good season but I didn’t think I had a chance of becoming an All-Star but it happened and I was happy and I was kind of surprised. It feels great. It feels good to be recognized and be thrown in with a group of good guys, guys who have been having good seasons.”

Johnson owes a huge amount of credit to his father for who he is as a pitcher.

“My Dad’s been my coach all my life. I’ve had help here or there but he’s been my biggest influence clearly.”

When it comes to all the counsel his father has given over the years, Johnson says one piece of advice really sticks out.

“Just forget about all the outside things and control what you can control and that’s executing one pitch at a time on the mound and everything else will take care of itself.” 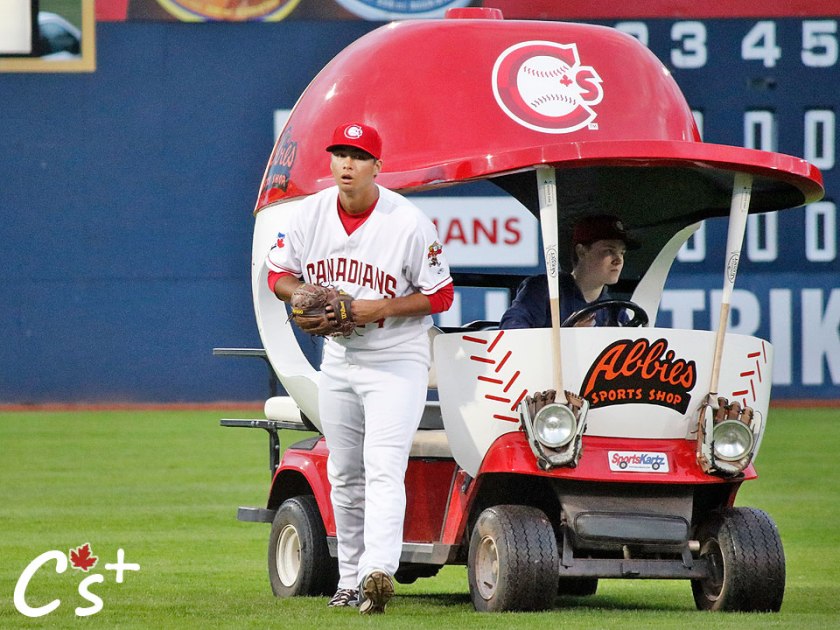 Cobi Johnson made 20 relief appearances for Vancouver in 2018.

Once, Twice, Three Times A Draftee

Johnson was drafted three times by three different clubs. The San Diego Padres selected him in the 35th round of the 2014 draft but he elected to go to Florida State. Johnson was chosen again in 2017 in the 29th round by the Los Angeles Angeles before the Jays drafted him in the 30th round in 2018.

Johnson says the first time his name was called was a special one.

I went to school. I was throwing the ball really well but I had Tommy John surgery and missed about two years so the second time I got drafted, I didn’t even pitch that whole year. I figured if I can come back and throw the ball the way I did before I had the surgery, I’d be putting myself in good position and fortunately the Blue Jays were able to take me the next year.”

Johnson was not totally surprised the Blue Jays called his name in this year’s draft.

“I had an idea. They liked me a lot even coming out of high school and so they told me they were going to draft me at this point so I was looking online and I saw my name pop up. I was back home with my mom and she was happy for me so it was good. A good experience for me.”

Johnson admits he would be excited to pitch for the team as his father.

“That’d be huge. If my Dad can still be there at the time and watch me when I make my debut, that’d be awesome.” 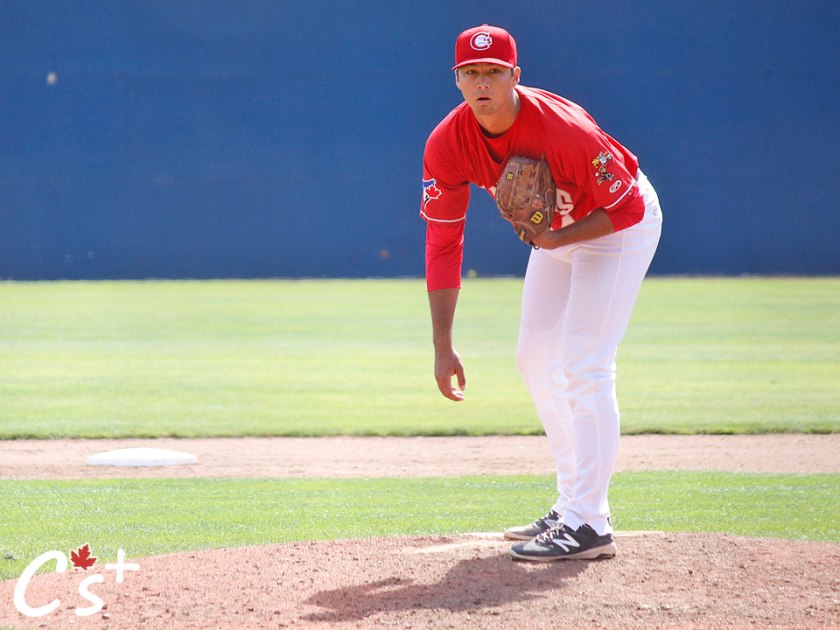 Johnson had to overcome adversity during his time in Tallahassee thanks to Tommy John surgery on his right elbow.

“I missed basically two years of college because of it and coming back, it was a long road. We took it slow so it took a long time but just getting that first outing underneath my belt in college earlier this year, it was big for me and to have the success I did in it was a big stepping stone.”

In this story from Steve Ewen from The Vancouver Province, Johnson received plenty of advice from other pitchers who underwent Tommy John surgery including former Jays knuckleballer R.A. Dickey. Johnson says he really had to pay attention to how his body was reacting during the recovery process.

“Most of them told me you’re not going to feel good during it some days. You’re just going to have to battle through and let your body speak to you. If you’re not feeling good that day, then take it easy. If you’re feeling good one day, then good, but just don’t overdo it and I think those words helped me out a lot.”

Johnson believes going through the adversity of Tommy John surgery will pay off for him in the long run.

One of the benefits of being a Florida State Seminole for Johnson was pitching for long-time coach Mike Martin, who became the all-time winningest coach in NCAA history by passing the late Auggie Garrido with his 1,976th victory. The main takeaway for Johnson from the coaching staff was utlizing his changeup.

“I think they preached a lot at Florida State (about) the changeup. I think in high school I was more a fastball-curveball guy and for me, the changeup made big strides in college and I’m able to use that now.”

One of Johnson’s most memorable moments with the Seminoles came not on the mound but in the batter’s box during his redshirt junior year. In just his second ever college at-bat, Johnson hit a home run against Stetson April 18.

“It was funny because we had a lot of injuries this year at Florida State and they started working me in taking some ground balls at third and working with me on my swing. One day, it was just a midweek game, we were up by a lot and I came in to pitch. The DH spot was coming up so they just threw me in the lineup too and I just got a fastball to hit and I actually hit it and it went out of the ballpark so it was a pretty cool experience.”

Johnson did not think the ball would go out.

“I didn’t. I had no idea. I knew I hit it well but it was kind of like a line drive and it just so happened to go out of the ballpark. I got to home plate, I just couldn’t stop laughing to be honest with you. I couldn’t believe that was happening. I didn’t know it was out until I looked at the third base coach rounding first base and he was all happy for me. It was a cool experience.”

Another memorable experience for Johnson was getting to play Boston College at Fenway Park April 21. Johnson was 1-for-4 with a walk, two runs scored and three runs batted in and pitched three innings of one-run ball to finish a 13-7 victory for the Seminoles.

“That was cool because I remember going to the Cape my freshman year and we had a little workout at Fenway but we didn’t actually play a game. This year, we got to play a game and it’s a cool field. There’s a lot of history there, a lot of tradition and it’s pretty cool to be able to play there.”

“It’s a lot different here from college. Pro ball and college baseball, there’s a big gap. There’s wood bats and you’re calling your own game and I think those two aspects have helped me out a lot.”

Cobi Johnson (middle) gets ready to join the victory line after nailing down a save against Hillsboro July 21 with Brandon Polizzi (#4) and Brett Wright (#17) trailing behind.

Johnson earned notice among scouts by being rated the second-best high school righthander in the state of Florida. He took part in many summer showcases, something he felt he benefited from.

“It was awesome to be competing at such a high level at such a young age. Just to see those guys’ careers take off because it’s been what, four or five years now, it doesn’t feel like it but it has. It’s cool to see some guys are starting to break out at the major league level. I just got into pro ball so hopefully I can get there as soon as possible as well.

I’ve played with Bo Bichette, I’ve played with Sean Reid-Foley. We were all on the same summer team at one point and Forrest Wall actually, who we just got, we were on the same team as well so all four of us, it’s funny. It’s a good time. It’s cool to see those guys up making big waves.” 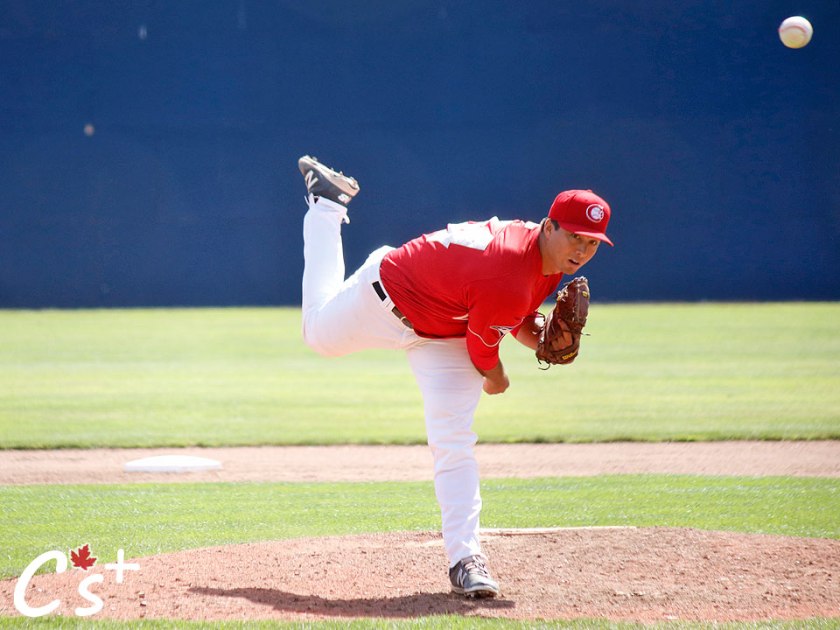 Cobi Johnson was a perfect 10-for-10 in save opportunity for the Canadians in 2018.

Johnson says he has three pitches that he likes to use.

“I’m going to come in and I’m going to work off the fastball. I’m going to pound the zone with the heater and I’m going to try to get ahead and put you away with either the curveball or the changeup. I think they’re both good offerings and I’ll throw them both to lefties and righties and try to keep people on their toes.

It all starts with the fastball so that’s got to be number one. If you have that, you can get through any outing. It goes fastball and probably for me, either the curveball or the changeup, they’re interchangeable. I think they’re good offerings and they can put away both lefties and righties.”

Johnson expanded a bit more on his fastball of choice.

“Just four-seam. You try to move it up and down, move it around and keep guys guessing. That’s all you need.”

Johnson has given all hitters in the Northwest League a tough time but he has been especially tough on lefthanded batters.

“It might be a small sample size because I feel like I’m facing a lot of righties up here but I think, especially to lefties, the changeup is a really good pitch and it’s been working for me all season.”

Johnson says his main goal boils down to one thing.

“Just keep on being consistent. Throwing strikes and getting ahead of guys and putting guys away.”

Johnson completed his season with a 1-0 record and a 1.73 earned run average. In 26 innings, he struck out 35 and walked eight and finished with a WHIP of 0.96. His first win came in Tri-City July 18 after pitching two shutout innings with three strikeouts.

Full-season ball is next up on the menu for Johnson and there’s a good chance he may get to Dunedin in 2019 if the Blue Jays brass feel he is up to the challenge. Johnson will turn 23 on November 6.

My thanks to Cobi Johnson for participating in this edition of C’s Chat. You can follow him on Twitter @Cobi_Johnson. Thanks again to Media Relations Assistant Sharlene Canning for arranging the interview.