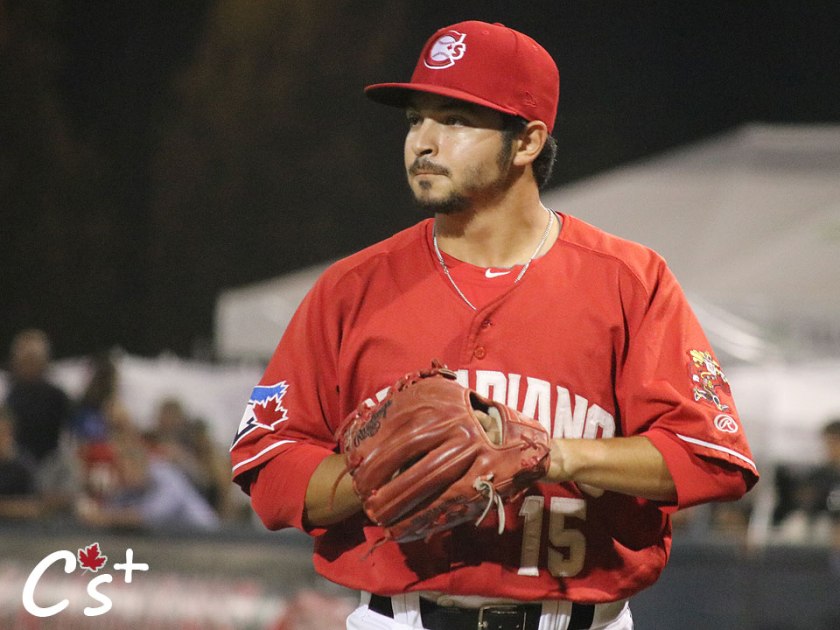 2018 Vancouver Canadians pitcher Joey Pulido gets the spotlight in this episode of C’s Chat.

The 5-foot-9 righthander from Clute, Texas pitched in the Lone Star State up until his professional debut this past season. Pulido attended Brazoswood High School in his hometown and  lettered four times. One notable performance came in 2013 when he gutted out a seven-inning complete game in which he threw 134 pitches to help Brazoswood outlast Elkins. Brazoswood coach Bobby Williams praised Pulido as a battler who “has a lot of guts when he is on the mound.”

The 2014 season saw Pulido being named a First Team All-District pitcher and the District Pitcher of the Year. His efforts helped Brazoswood win two District Championships and an appearance in the regional final.  The year was capped off by Pulido being named a 2014 Perfect Game Qualifier MVP Pitcher to lift the Houston Banditos to the Perfect Game WWBA South Qualifier championship.

It was off to Alvin, Texas for Pulido as he attended Alvin Community College, the same institution Hall of Famer Nolan Ryan attended. The 2015 season saw Pulido go 7-0 with a 2.86 earned run average with 10 of his 12 appearances coming out of the Dolphins bullpen. In 2016, Pulido was in the starting rotation and finished with a 5-4 record, a 4.86 ERA and three complete games. His 65 strikeouts in 64 innings bettered his 2015 total of 64 whiffs in 62 frames. Both seasons saw Pulido land a berth on the NJCAA First-Team All-Conference squad.

The 2017 season saw Pulido transfer to the University of Houston where he became a key member of the Cougars bullpen. His 21 appearances was tied for the team lead and he struck out 42 batters in 40-2/3 innings, collecting two saves to go with an ERA of 3.98.

In 2018, Pulido won six of eight decisions with a 3.55 ERA, six saves and 53 strikeouts in 50-2/3 innings. Of his 28 appearances, all but one were out of the bullpen. One of those outings out of the pen included 6-2/3 innings of relief against Houston Baptist University in March.

During Pulido’s tenure, the Cougars won back-to-back American Athletic Conference titles and advanced to NCAA Regional play. He also succeeded in the classroom with American All-Academic Team honours in 2017 and 2018.

Pulido has very fond memories during his time at the University of Houston.

“Houston was awesome. Great coaching staff, great players there. I got to spend two good years with them. My first year, I was kind of like in a mid-relief role. I got to come out of the bullpen. I think I had around 40 innings my first year. I pitched well. They helped me. They changed some things mechanically with me that allowed me to perform better.

My second year, they changed me into the closing role there at the University of Houston. I enjoyed it. I mean, I don’t know how many saves I had. I didn’t keep track of it too much but it was a fun year, a great time, the fans were awesome and I enjoyed playing there for two years.”

The pitching coach with the University of Houston was the one who got Pulido straightened out mechanically.

“My junior year, I had a big problem with closing off my body so I was coming in front, step in front of my body. My pitching coach at the time, Frank Anderson, who’s now at the University of Tennessee, he helped me open up more and start driving towards home plate. It really allowed me to kind of come more through my body and gain some velo and get more accurate with some of my pitches and hit locations and what not.”

The 2018 Major League Baseball draft was next on the baseball calendar for Pulido and the Toronto Blue Jays came calling by using their 32nd round pick to take him, giving him a $1,000 signing bonus. Unfortunately, Pulido was not feeling like a thousand bucks that day.

“During the draft, I was feeling kind of sick. I was in bed laying down, following it on my laptop. I had talked to the Blue Jays a few times before the draft and they seemed to be very interested so I had a feeling that I was going to go at some point in the draft. I was keeping up with it on my laptop and as soon as I saw my name, about five minutes afterward I got a call from Charlie Wilson and my area scout (Brian Johnston) who drafted me and told me I got drafted by the Blue Jays.

I went home. I was in Houston at the time where I was staying for college. I drove down home, about a 45-minute drive and I spent some time with my family. It was a good time.”

Pulido says things moved fast once he was drafted by the Blue Jays.

“I got the call. I think it was a Wednesday afternoon whenever they drafted me. That day, when Brian (Johnston) called me, he was like, ‘Hey man, we have your flight info for Friday.’ It was a quick turnaround. I went home and spent (time) with my parents. Packed some things. I went to see my grandparents, talked to them for a little while. I went back to Houston. Packed all my things from my locker at the university. Thanked the coaches for the opportunity.

That next morning, on Friday morning, I was heading out to Dunedin. I got there, I got situated in at the hotel and the next day, we started our little mini-camp for all the new draftees.”

One thing Pulido was used to during his stay in Dunedin was the humid weather.

“Houston is really hot and humid. It’s about 100 degrees there too. The climate there was very similar to Houston so it wasn’t too much of a struggle for me.”

The Gulf Coast League was the first stop for Pulido as he made his professional debut June 18 in Bradenton against the Pirates. He induced a tapper back to the moudn and struck out the next two batters he faced and got a groundout. However, the first strikeout was a wild pitch that allowed the hitter to reach first base. Two singles, an error and a hit by pitch followed, leading to a pair of runs (one earned) before getting out of the inning.

Five days later, things went better for Pulido as he retired the GCL Tigers in order with two punchouts to earn a hold in his one inning of work.

The next time Pulido was on the mound was June 26 in Bowen Field, the home of the Bluefield Blue Jays. He wasn’t around for long as he needed just six pitches to retire the side in order against the Princeton Rays. Pulido needed just seven pitches two days later to take care of the Greeneville Reds. Though he would suffer his first professional loss, four of Pulido’s six outings in the Appalachian League were of the scoreless variety.

“Bluefield was awesome. It’s kind of smaller, a smaller location. You’re in the middle of a lot of mountains but I enjoyed my time there though. The team was fun. The guys were good. The coaches were good with Adam Bernero the pitching coach there and (manager) Dennis Holmberg were both great guys I got to meet and I enjoyed my time. I enjoyed being there.”

The second promotion of Pulido’s career came in mid-July when he was assigned to Vancouver and that was a boost of confidence for the righthander.

“Definitely. I’m just trying to take it day by day, whatever happens. Obviously being promoted is big. When I got the promotion to Bluefield, I was really excited, you know, going from the GCL to Bluefield. I thought I was going to stick there to be honest with you for the rest of the short season. Two weeks later, it was a short time there, they called me again and said, ‘Hey, we’re promoting you to Vancouver.’ I can’t say anything better about Vancouver than what it is. It’s awesome being here.

The atmosphere is tremendous. It definitely gives you a rush, a thrill when you’re on the mound. It makes you want to perform in front of these fans because they’re great. It’s awesome.”

Pulido made his C’s debut with 3-1/3 scoreless innings of relief in Tri-City July 16. He gave up an unearned run in his Nat Bailey Stadium debut July 20 against the Hillsboro Hops. Pulido was nicked for another unearned marker August 1 in Hillsboro. Against everyone else in the Northwest League, he slammed the door shut. Pulido ended the year with 10 scoreless appearances and a 15-1/3 innings scoreless streak. He finished the season with a 1-0 record and a 0.00 ERA. That first professional win came in Everett with two scoreless innings of two-hit ball against the AquaSox July 24.

When it comes to his arsenal of pitches, Pulido is confident in what he throws.

“I throw a fastball, changeup, curveball and slider so I throw four pitches, I like to think I can throw them whenever I want and have control of every pitch and I trust every pitch with everything.”

Pulido says he has two different fastballs he uses.

“Usually two-seam. I like to throw two-seam a lot just because it gets some movement inside and some arm-side run. I throw them both, two-seam and four-seam. I guess it kind of just depends on the count or the hitter.

When I’m trying to go outside, I usually try to go four-seam. That way, it doesn’t run back over the plate. I’m trying to go inside with the two-seam definitely, try to get it in under their hands or whatnot.”

The secondary pitches Pulido uses depends on the matchup but he does have a preference for which one he throws.

“Probably my slider. I mean, I guess it would depend on if it’s a lefty or a righty. With lefties, I like to go with my changeup. Righties, it’s a lot of slider and curveball.”

“I don’t think I compare myself to anyone in the major leagues but if there is one I’d admire and who I kind of look up to for what he’s done is Marcus Stroman. He’s a smaller guy, kind of like me and he has dealt through some adversity with being a smaller guy and I like to see smaller guys have success. He’s obviously one of the best at it.”

All 23 of Joey Pulido‘s professional appearances have been in relief but he still holds out hope of being a starter again.

Though he remained in relief in his first professional season and made 56 of his 72 appearances out of the bullpen during his college years, Pulido would love to be a starter again someday.

“Definitely. I started, pretty much started my entire life. I was a starter until my junior year in college. I went from two years in junior college being a starter, having over 90 innings, and then my role changed. Everything kind of changed, two completely different roles, but no, if I got a chance to start again, I’d definitely embrace it and I’d love to do it.”

The 23 year-old Pulido is expected to head to Lansing for 2019 and a promotion to Dunedin would not be out of the question if he can replicate his successful 2018 campaign.

A big thank you again to Joey Pulido for participating in this episode of C’s Chat and to C’s Media Relations Assistant Sharlene Canning for arranging the interview.