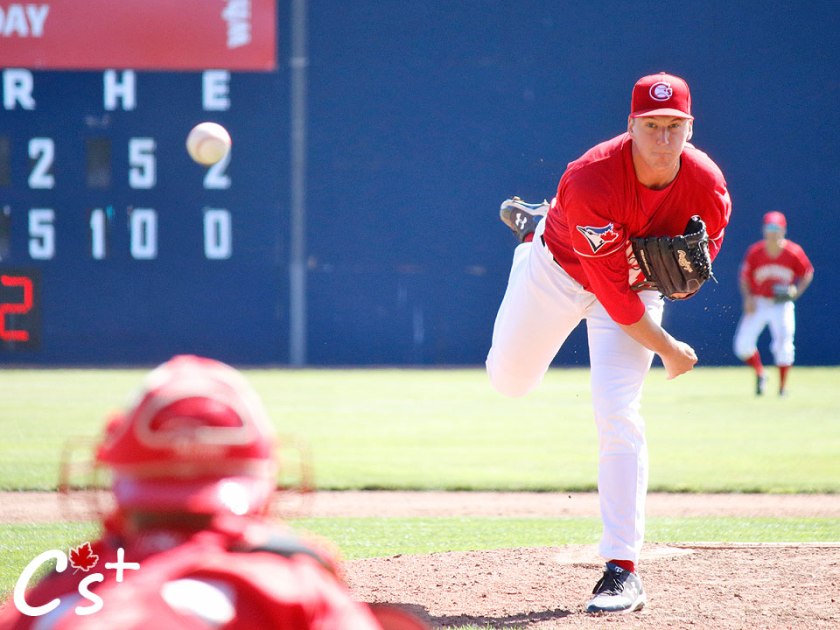 Connor Law limited righthanded hitters in the Northwest League to a .186 batting average in 2018.

2018 Vancouver Canadians pitcher Connor Law takes his turn in the order on the latest round of C’s Chat.

The 6-foot-4 righthander from Chatham, Illinois was a free-agent signing of the Toronto Blue Jays in 2017 after a five year-stay at NCAA Division II Lindenwood University. A redshirt freshman in 2013, Law made only made four relief appearances totaling 4-1/3 innings in 2014. He remained in the bullpen for his first extended action in 2015 and compiled a 3-3 record with a 4.04 earned run average and two saves.

The 2016 season saw Law move into the Lions rotation in 2016 where he made 12 of his 15 appearances, winning six of his eight decisions with a 2.82 ERA. It was back to the bullpen for Law in 2017 and he averaged more than a strikeout an inning for the first time in his college career, ringing up 67 batters over 65 innings. Duplicating his 2016 record of 6-2, he saved 12 games and recorded an ERA of 3.16.

Roar Of The Lion

2017 was a banner year for Lindenwood as it won the MIAA Tournament Championship and NCAA Central Regional Championships to reach the Division II Championship for the first time in its four-year history. Law had a huge hand in that effort as he pitched a whopping eight innings of relief, allowing just a two-run home run as the Lions knocked off No. 1 seed Emporia State to advance to the Division II tournament.

That effort earned Law honorable-mention all-region honors on the heels of a 1st-Team All-MIAA selection after being named a 2nd-Teamer in 2016. His academic excellence never wavered as he was named to the MIAA Academic Honor Roll five years in a row.

The time Law spent at Lindenwood really helped him develop his craft as a hurler.

“I had never really pitched in my life and I came in as a pitcher so I was trying to figure out how to pitch and to throw strikes. It was a big thing. It took me a couple of years to get it down. I’ve been like at the bottom of the barrel, so they say, like I’ve hit rock bottom and don’t know how to pitch, don’t know how to do anything. It’s not a great feeling but I’ve been there.

I pitched a little bit in high school, like 10 innings or so, and then a little bit in summer ball but I pitched like enough where the scouts had seen me. I threw decently hard so they were like ‘Well, we could always teach someone mechanics but feel (for pitching) is kind of harder to teach.’ At least I had one thing going for me.”

Working with strength coaches to put on weight and muscle to improve body control was one part of the equation for Law. The other part was the tutelage of Lindenwood’s pitching coach and recruiting coordinator.

“Nathan Beuster, who’s a scout for the (New York) Mets now. He was my pitching coach down there and he taught me pretty much everything. It’s just night and day different on what I used to be and what he’s helped me do. He altered a lot of mechanics just how to feel out like how you’re throwing and how to make an adjustment.” 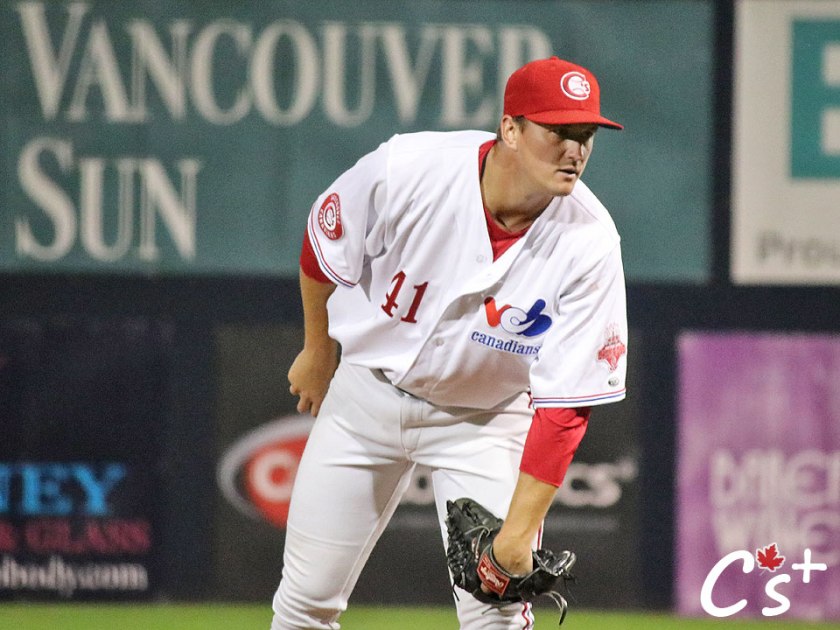 Connor Law signed with the Toronto Blue Jays as a free agent June 25, 2017.

When the 2017 Major League Baseball draft rolled around, Law did not hear his name called but he heard from the Blue Jays not too long afterwards.

“The draft ended about 15 minutes later. They called me and asked if I still wanted to play baseball. I said, ‘Alright, yeah. Absolutely!’ They were just like, ‘Alright. We’ll send you the information in about 10 minutes.’ It was just a plane ticket. It was that easy.”

I had my family over and we were watching it. I kind of expected to get drafted but the fact I wasn’t doesn’t change anything. I’m still here. I just wanted the opportunity and I got it so I can’t be too mad at it.

I know some teams had contact with my coaches and then I filled out questionnaires and then spoken to them a couple of times. That’s why I kind of expected to get drafted and kind of had an expectation in my mind but I couldn’t be more happy than to play for the Jays (organization).”

Not all of the questionnaires were the same according to Law.

“All the teams are different. Some of them have personality questions like who are your role models and stuff like that. Other people you may know that play professional baseball and then kind of like medical stuff but it’s nothing really too in detail. It’s kind of basic information.”

The man who brought Law into the Blue Jays nest is no longer with the organization.

“Jeff Johnson was the area scout. I think he’s actually in the front office with the (Tampa Bay) Rays now (as coordinator of amateur scouting). Great guy. He gave me this opportunity.”

Connor Law got a victory in his first professional appearance in the Gulf Coast League in 2017.

The Gulf Coast League was Law’s first stop as he made his professional debut June 27 when he earned his first win with two innings of one-run ball against the GCL Tigers West. He did not allow an earned run until his sixth appearance. His second win came against the GCL Phillies July 31 when he spun 2-1/3 shutout innings. That was followed by his first two professional saves versus the GCL Pirates August 4 and the GCL Braves August 7.

A 2-1 record and a 1.54 ERA earned Law a promotion to Bluefield where he completed the regular season with a victory against Johnson City August 30. That game saw Law strike out four over two innings as part of his three scoreless appearances with the Bluef-Jays. Law also got the win in Bluefield’s playoff opener September 2 against Pulaski but the Yankees would prevail in the Appalachian League semi-final.

Overall, the 2017 campaign was a good one for Law once he got over some early jitters.

“It was kind of scary. I was really nervous. I didn’t know how pro ball really worked. Any little thing, I would be like, ‘Oh no! Am I going to get released?’ The first year, it doesn’t really matter how you do. It’s more of the organization getting a feel for you. Once I kind of came to the realization of that, it was a lot more relaxing and it was a lot more fun that way. It was like all the pressure is off, just go play baseball.”

It was a good time though. The GCL (with) the 12 o’clock games and the humid Florida heat, that was a little rough. Going to Bluefield and having night games, that was a blessing. It was so nice and then coming here (to Vancouver), this place is unreal.”

Connor Law kept the opposition scoreless in 18 of his 22 outings with Vancouver.

Before getting to Vancouver, Law made his 2018 debut with the Dunedin Blue Jays and put together two scoreless appearances covering 3-2/3 innings against the Florida FireFrogs May 22 and against the Lakeland Tigers May 26. His C’s debut came in Eugene June 17 when he earned the save with 1-2/3 innings of shutout ball in which he matched his career high in strikeouts with four.

Though his ERA with the C’s was a little on the high side at 4.23, a couple of four-run outings against the Tri-City Dust Devils helped inflate that mark but he converted all four save opportunites, struck out 33 batters in 27-1/3 innings and limited Northwest League hitters to a .238 average.

Getting to pitch in front the sell-out crowds at Nat Bailey Stadium was something Law really enjoyed.

“Every game here feels like a playoff game with a packed house. It’s always loud, the fans are always into it. It’s just a great experience.”

Pitching out of the bullpen is something Law also thrives on.

“I feel like I almost do better when the game is on the line. I feel like I’m more locked in to the game. I just love ending the game. It just makes me feel like powerful and dominant over the other team.”

When it came to keeping his focus on the game on the mound at Nat Bailey Stadium, Law channeled his inner Billy Chapel.

“There’s a movie called For The Love Of The Game. In that movie, (Kevin Costner) always says ‘Clear the mechanism,’ and he clears out all the background noise. I don’t know how to describe it but that’s what you kind of have to do here.

As soon as the game is over and you hear everyone cheering and stuff, it’s so cool, but during it, if I sat there and listened to the fans, I feel like I get in my mind and be like, ‘Oh no!’ (laughs).”

Opposing batters have to deal with a three-pitch mix from Law, beginning with his fastball.

“I throw a four-seamer. I’m kind of working with a sinker. It’s just me holding the ball differently. It’s like a one-seam. It’s kind of hard to describe. I haven’t really thrown that a whole lot. I kind have just been focusing on my slider and changeup mostly but I feel like the sinker is going to come along as soon as I start getting on it.”

Also in Law’s arsenal are a changeup and a slider.

“I have a changeup that kind of acts like a split-finger, It just kind of has a violent drop to it, and then a slider. I wouldn’t say like it’s a sweeping slider, like real big. It’s almost like a cutter, like it’s pretty small but it’s late. I’m just making sure I throw them as hard as my fastball at least in my mind. It’s like the biggest thing.”

When it came to working with a breaking ball, Law opted for the slide piece.

“The slider is just easier because I can throw it basically just like a fastball so I feel like that’s going to be more of my suit rather than a curveball.”

Something that Law has had to deal since his arrival in the Blue Jays system is getting confused with fellow pitcher and 2017 Vancouver Canadian Colton Laws, a previous guest on C’s Chat. The situation was no different in Vancouver.

“Even Cy (Jim Czajkowski), our pitching coach still calls me Colton or Connor Laws. I always make sure I correct him but everyone does it. As soon as they know Colton, and then Connor, they’re like ‘Oh no!’ (laughs).”

A Cardinals fan growing up, Law could begin 2019 where he started in 2018 and that’s with the Dunedin Blue Jays. It would be fitting if the 24 year-old Law can accelerate his climb to the majors as he warmed up to The Eagles ‘Life in the Fast Lane’ out of the C’s bullpen.

My thanks again to Connor Law for participating in another C’s Chat and to C’s Media Relations Assistant Sharlene Canning for setting up the interview.