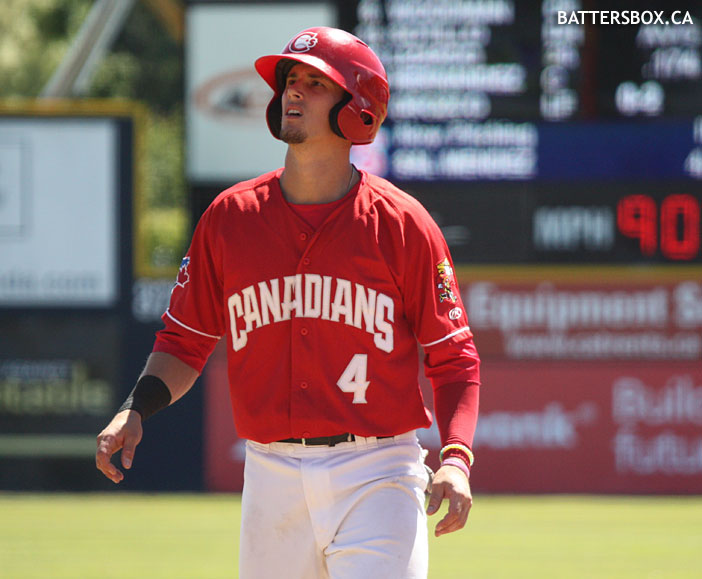 Three players from the last three Vancouver Canadians squads turned in stellar performances on Opening Day in the minors.

Cavan Biggio made a big splash in his Triple-A debut Thursday.

2016 Canadians second baseman Cavan Biggio had three hits in four at-bats, including a two-run homer off Gio Gonzalez and a stolen base, as Buffalo stomped on Scranton/Wilkes-Barre. Nate Pearson (2017) tossed five innings of one-run ball on four hits and a walk while striking out six to earn his first professional win as Dunedin destroyed Clearwater. Josh Winckowski (2018) limited Fort Wayne to two hits and three walks over five shutout frames, striking out seven and getting six groundball outs. The Northwest League Pitcher of the Year had to settle for a no-decision as the Lugnuts were blanked in Fort Wayne.

In Buffalo, Biggio held court with the media after the game.

Biggio was asked if there was any extra significance about homering against a 11-year major leaguer in Gonzalez.

Biggio was not the only former Vancouver Canadian to contribute to the Bisons big win. Andy Burns, Andrew Guillotte and Roemon Fields also had base hits and runs scored with Fields adding a walk.

In Dunedin, Pearson bounced back with a vengeance in his first appearance with the D-Jays after taking a line drive off the forearm that sidelined him for a majority of 2018.

Pearson admitted to battling some early jitters in the above interview.

“Yeah definitely. I felt like I was rushing myself out there in my routine and everything but I had plenty of time. I had to calm myself down a little bit but it was definitely fun.”

Pearson gave up his only run in the third on a leadoff home run by Edgar Cabral and gave up a single, an infield single and a walk to load the bases with one out but he escaped with an infield popup and an inning-ending strikeout.

“It felt good. You know I think it was good to face some sort of adversity. I struggled a little bit in that inning but I was able to respond and get out of the jam so it was good.”

Letting out of a big yell after completing his five innings, Pearson was asked about how it felt to release that emotion.

“You know, it just kind of just for my morale and everything, for everything I worked hard to get back to. It’s just good to have a healthy outing and hopefully a healthy spring and season so it was a kind of a sigh of relief and hopefully just keep the ball rolling and keep going with it.”

2017 C’s outfielder Chavez Young enjoyed a two-hit night in his Dunedin debut and Christian Williams (2016) doubled and singled in his first game since last May after missing most of the season due to injury. Pearson’s batterymate Riley Adams (2017) provided more support a home run and Logan Warmoth (2017) added a hit, a walk and two RBI. Kevin Vicuna (2017) also provided a run-scoring single.

In Fort Wayne, Winckowski made his first full-season start with Lansing and did quite well in his Midwest League debut. FutureBlueJays.com tweeted some observations of his performance.

Otto Lopez (2018) had a hit and two walks, Jake Brodt (2018) also picked up his first Midwest League hit and Reggie Pruitt had a knock but Lansing struck out 14 times in the loss.

In New Hampshire, Binghamton spoiled the Fisher Cats home opener by getting to Patrick Murphy (2016) for three runs (two earned) over four innings.

It was also Opening Day for a baker’s dozen of other Vancouver Canadians outside the Blue Jays minor league system.

Lugo had a hit and two walks (!) in Toledo’s win over Louisville. Considering he walked all of nine times with the Mud Hens last season, this is a major development for his plate patience. The 2013 C’s shortstop did walk seven times during his 27-game trial with Detroit last season.

Another baker’s dozen of former C’s also found themselves on major league rosters at some point this season.

Adding one more list to the pile, Baseball America revised its Top 100 prospects list that featured one former Vancouver Canadian among the seven Blue Jays up-and-comers.