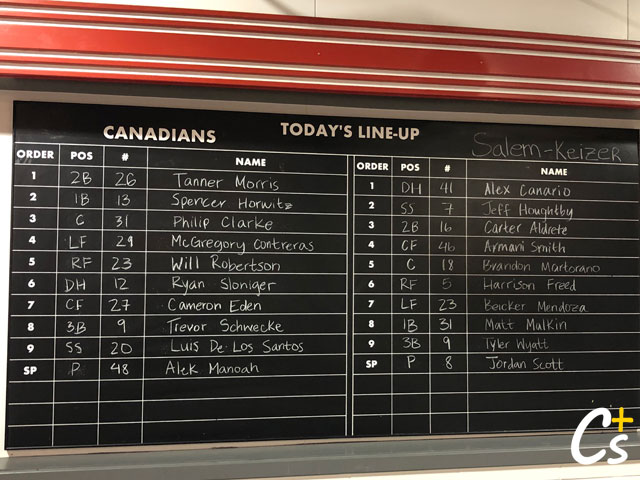 C’s Recap – Is the Affiliation Over Between the Toronto Blue Jays and Vancouver Canadians?

No starting lineups will be filled out at Nat Bailey Stadium in 2020.

There are ominous signs that the Vancouver Canadians will have a new MLB dance partner whenever they return to the field next. We know they will not suiting up to play at Nat Bailey Stadium this season after the 2020 Northwest League campaign was officially cancelled Tuesday due to the COVID-19 pandemic.

The collective bargaining agreement between Major League Baseball and Minor League Baseball will conclude at the end of September. MLB plans to contract 42 teams from MiLB, limiting the 30 big league clubs to four full-season affiliates and a complex-league team. Vancouver has not appeared on the list and would appear to be safe from contraction.

Short-season baseball will be eliminated under the MLB proposal but the Northwest League will become a full-season six-team Single-A circuit according to Baseball America.

The question now is who will the Vancouver Canadians be affiliated with? In a game of musical chairs, one of Buffalo, New Hampshire, Dunedin, Lansing or Vancouver will be left standing at the altar. Steve Ewen of The Vancouver Province raises the possibility that the arrangement between Canada’s Teams could be over.

One would think from a marketing perspective that keeping the Canadians in the fold would be a no-brainer for the Blue Jays. One would also think from a development perspective that keeping the C’s in the nest would be a slam dunk as the players get to play in front of 6,000-plus people every night and day at The Nat. The only thing not on the side of Monty’s Mounties is geography as the current four full-season affiliates all reside in the Eastern Time zone.

Should the Blue Jays break ties with Vancouver, it only stands to reason that the Canadians will be paired up with a West Coast team. As it stands, Vancouver’s Northwest League counterparts in Tri-City and Salem-Keizer are on the contraction list. That could result in the San Diego Padres (Tri-City’s current affiliate) or the San Francisco Giants (Salem-Keizer’s affiliate) being available for Vancouver if the Dust Devils and Volcanoes are contracted.

San Diego’s affiliates from Triple-A on down are in El Paso and Amarillo in Texas, Lake Elsinore in California and Fort Wayne in Indiana. The Friars and the Tin Caps have been together since 1999 but if geography is to rule the day, Vancouver could step in for Fort Wayne.

San Francisco is currently affiliated with Triple-A Sacramento, Double-A Richmond in Virgina, High-A San Jose and Low-A Augusta in Georgia. Going by geography again, Vancouver would more advantageous than Georgia for the Giants. The GreenJackets have been with San Francisco since 2005.

The Los Angeles Angels could also be a candidate. Their Midwest League affiliate in Burlington, Iowa is on the contraction list. That would leave an opening for the Canadians, who were affiliated with the Halos from 1993-1998.

The Canadians previous major league affiliate—the Oakland Athletics—could be back in the fold. The A’s Low-A Midwest League affiliate in Beloit, Wisconsin is on the list of 42 teams that will be eliminated. Oakland and Vancouver were together from 1999-2010 before Toronto took over as the C’s major league partner.

Vancouver Canadians Director of Communications and Broadcaster Rob Fai was asked by TSN 1040 in Vancouver about a possible affiliate change.

“We have a working relationship with the Toronto Blue Jays. It’s a phenomenal working relationship so I would be heart-broken personally —not just as a fan of the Blue Jays but as an employee of the Canadians—if that was to ever fall by the wayside. I don’t see it happening but with everything that I’ve seen in the last six months between Major League Baseball and Minor League Baseball, there’s nothing that would surprise me at this point.”

To echo Rob Fai’s sentiments, I would also be disappointed if Canada’s Teams are no longer together. Much like how the Blue Jays trumpeted their current logo back in 2012 as their “Logo for Life”, the Jays and Canadians current affiliation should be the “Affiliation for Life”.

This Canada Day marks the first time I have not been at Nat Bailey Stadium since moving to Vancouver in 2012. It’s a tough day for C’s fans and everyone involved with the Vancouver Canadians organization and Nat Bailey Stadium. Here’s hoping things will be back to normal by the time Canada Day rolls around in 2021.

Even though there is no baseball, I have contacted a couple of players from the 2011 Vancouver Canadians so keep checking back for the latest C’s Chats in the coming days. Happy Canada Day and stay safe!