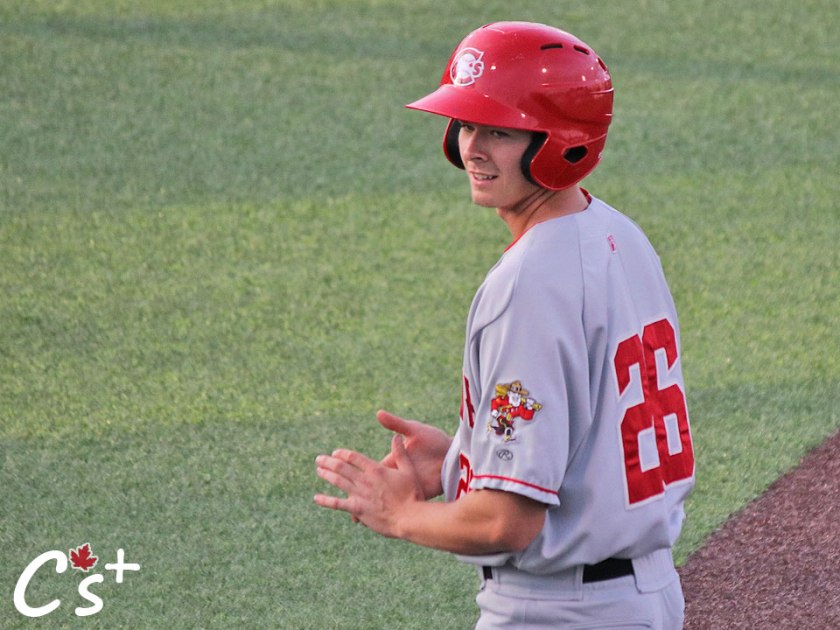 The Vancouver Canadians fought back from three deficits before losing to the Eugene Emeralds 6-5 in 10 innings at Ron Tonkin Field Wednesday.

C.J. Van Eyk could not locate the strike zone in the first inning as he walked Simon Whiteman, Patrick Bailey and Logan Wyatt to begin the game. Whiteman and Bailey also swiped second base in between all of that before Franklin Labour singled them home to give the Emeralds a 2-0 lead.

The Canadians got one run back in their first at-bat. Tanner Morris doubled to left with one out off Conner Nurse and reached third when Cameron Eden got on base on a fielding error by Wyatt at first. Spencer Horwitz scored Morris with a sacrifice fly to make it a one-run game.

Eugene got to Van Eyk for one more run in the fifth as Whiteman’s leadoff double was driven in by a Wyatt base hit.

Vancouver tied the game with three extra-base hits in the sixth. Morris led off with a triple and scored on a triple by Horwitz. Ryan Gold doubled home Horwitz to chase Nurse from the game. Emeralds reliever Ryan Walker walked Luis De Los Santos but retired the next two hitters to keep the game tied.

Eugene retook the lead in the seventh when Javeyan Williams worked a leadoff walk by Justin Maese in the seventh. Williams would steal second and come all the way around to score on a one-out single by Bailey.

Vancouver would square things up again in their half of the seventh. Tanner Kirwer doubled to right field with one away and stole third base. Morris drew a walk and Eden was hit by a pitch from Walker to load the bases. Horwitz’s RBI groundout to first off R.J. Dabovich scored Kirwer with the tying run but Gold struck out to leave the bases loaded.

Eugene moved ahead in the eighth when Jacob Gonzalez homered to left-center field for a solo shot off Maese.

The Canadians were able to even things up in the ninth with Kirwer greeting John Russell with an infield single to third. Kirwer swiped second base and made it to third on a throwing error by Bailey behind the plate. Morris was able to drop a single to left to score Kirwer with Vancouver’s fifth run.

Parker Caracci survived the ninth in spite of a couple of walks—one intentionally—but a leadoff walk to Tyler Fitzgerald in the 10th started his downfall. With Labour starting the inning a second base, a one-out free pass to Tyler Flores loaded the bases. Labour would then score on a Philip Clarke passed ball to put Eugene ahead once again. Caracci limited the damage by striking out the next two hitters.

With Gold on second base to start the bottom of the 10th, De Los Santos struck out swinging and Clarke grounded out to first to move Gold to third. Sebastian Espino then lined out to left to end the game.

Vancouver had at least one runner on base except for the fifth as they went 2-for-12 with runners in scoring position, leaving 10 men on base.

Morris had a perfect night at the dish by finishing a home run short of the cycle to go along with two walks. Kirwer had two hits and two stolen bases and Gold also had a two-hit night.

Horwitz was 1-for-4 with a sacrifice fly and drove in a pair of runs. De Los Santos, Clarke, Espino and Eric Rivera were a combined 0-for-17 with Espino getting a walk.

D.J. Neal took over for Eden in centre field in the eighth inning after Eden was hit in the arm by a pitch. Eden also walked to reach base twice. Neal was 0-for-1 in his lone plate appearance.

Van Eyk rebounded from a shaky first inning to put in five innings of three-run ball on five hits and three walks. He struck out three and recorded six outs on the ground.

Maese gave up two runs on two hits and a walk but struck out five over two innings.

The Canadians send Luis Quinones to the hill as they look for their first victory of this series against the Emeralds. Game time is 7:05 pm and can be heard on CanadiansBaseball.com.

C’s hurler Will McAffer is down in Florida trying to help Canada qualify for the Summer Olympics. He pitched 1-2/3 scoreless innings with two walks and two strikeouts but Canada lost to Venezuela 5-0.

Otto Lopez (2018) was 3-for-6 and Samad Taylor (2017) and Reggie Pruitt (2017) homered but New Hampshire lost 8-7 in 10 innings. Taylor stole a base while Pruitt knocked home two runs. L.J. Talley (2021) delivered a pinch-hit RBI single in the 10th. Nick Podkul (2018) reached base twice on a single and hit by pitch and also swiped a bag. Kevin Vicuña had a base hit and Brock Lundquist (2017) walked. Andrew McInvale (2021) earned a hold with two shutout innings by walking one and striking out three.