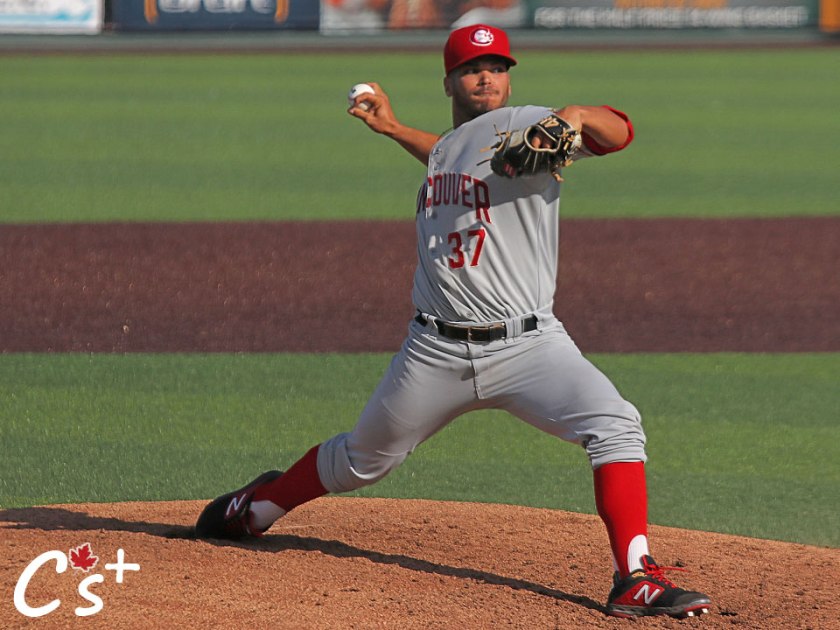 The Vancouver Canadians beat the Eugene Emeralds for the first time this season with a 7-5 victory at Ron Tonkin Field Thursday.

The Emeralds put up a crooked a number in the first inning for the third straight night as Logan Wyatt hit a two-out, two-run home run off Luis Quinones that scored a Simon Whiteman walk.

The C’s got those two runs back in their first at-bat off Em’s starter Nick Avila. Tanner Morris walked with one away, went to second on a Luis De Los Santos ground ball to the right side of the infield and scored on a Spencer Horwitz double to right field. A ground-rule double by Ryan Gold plated Horwitz to tie the game at 2-2.

Vancouver would expand its lead in the fourth and it started with Ronny Brito homering to left-center off Solomon Bates to make it a 4-2 game. Rafael Lantigua doubled and got to third on a one-out wild pitch. Kirwer then walked and stole second and he and Lantigua came in to score on a Morris base hit to left with Morris getting thrown out at second.

Eugene was held off the scoreboard until the eighth inning when Brandon Matarano got aboard on a broken-bat infield single to short off C’s reliever Hagen Danner. Javeyan Williams followed with a base hit to right and advanced to second on a cut-off throw by Rivera that missed the mark, pushing Matarano to third. Kirwer muffed a sacrifice fly from Whiteman that allowed Matarano and Williams to score and Whiteman to reach second base, cutting Vancouver’s lead to 6-4. 2019 Los Angeles Angels first round pick Will Wilson drew a walk before being part of a double steal with Whiteman to put runners the tying runs in scoring position.

Danner fell behind Sean Roby in the count at 2-0 before exiting the game with an injury. Left-hander Marcus Reyes came out of the bullpen and got Roby to strike out on three pitches before getting Wyatt to go down swinging for the second out. Reyes walked Tyler Fitzgerald to load the bases but got out of the inning by getting Franklin Labour to ground out too short.

The C’s increased their lead to three in the bottom of the eighth when Gold drew a leadoff walk against Emeralds reliever John Timmins. Gold got into scoring position on a Timmins wild pitch before scampering home on a two-out Lantigua double to center.

Eugene would not go away quietly in the ninth. Matarano delivered a one-out triple off Reyes and Williams then walked to put runners on the corners. Whiteman hit into a 3-6 fielder’s choice but got to second on a De Los Santos throwing error that scored Matarano to trim Vancouver’s lead to two. Reyes would strike out Wilson swinging to end the ball game.

Despite a two-run first, Quinones did strike out the side in the first inning and did the same in the third and fourth innings. He finished up by retiring 11 of the last 12 hitters he faced. Over five innings, Quinones allowed two runs on one hit and three walks while striking out 11 for the victory.

Gold helped Quinones to get out of the second inning by throwing out Labour trying to steal second.

Cobi Johnson gave up a Whiteman walk and a Wilson single to start the sixth before inducing a 4-6-3 double play from Roby. Johnson would retire the next four hitters he faced to give him two scoreless frames.

Lantigua had the only multi-hit night for Vancouver by getting two doubles and a single. Morris also got on base three times with a hit and two walks and reached base eight straight times in this series. So far, Morris is 5-for-13 against the Emeralds.

Kirwer tripled, walked and stole his 16th base of the year, leaving him one back of teammate Cameron Eden for the league lead.

Eric Rivera put an end to a miserable 0-for-32 start with the Canadians with his third inning single. He hit .474 in six games with Dunedin before getting called up to Vancouver.

Willy Gaston is back with the C’s. The right-handed hurler had a 3-3 record with a 3.23 earned run average with Vancouver in 2019. The 25 year-old from Havana, Cuba began the year with Dunedin and went 2-0 with a 1.69 ERA before making five appearances with Double-A New Hampshire.

Nick Fraze‘s turn in the Vancouver rotation is up Friday night. He’ll throw the first at pitch at 7:05 pm. That game will be on CanadiansBaseball.com. Adam Kloffenstein and Paxton Schultz are slated for the weekend starts for the C’s.

Otto Lopez (2018) and L.J. Talley (2021) had two hits apiece and Samad Taylor added a double and was hit by a pitch but New Hampshire was defeated by Binghamton 9-3. Chris Bec (2018) walked and was plunked while Reggie Pruitt (2017) and Nick Podkul drew a walk. Connor Law (2018) struck out four over two shutout innings of one-hit ball and Jon Harris (2015) pitched a scoreless frame with one walk.

Jon Berti (2011) had two hits and laid down a sacrifice bunt in Miami’s 5-3 loss to Pittsburgh.