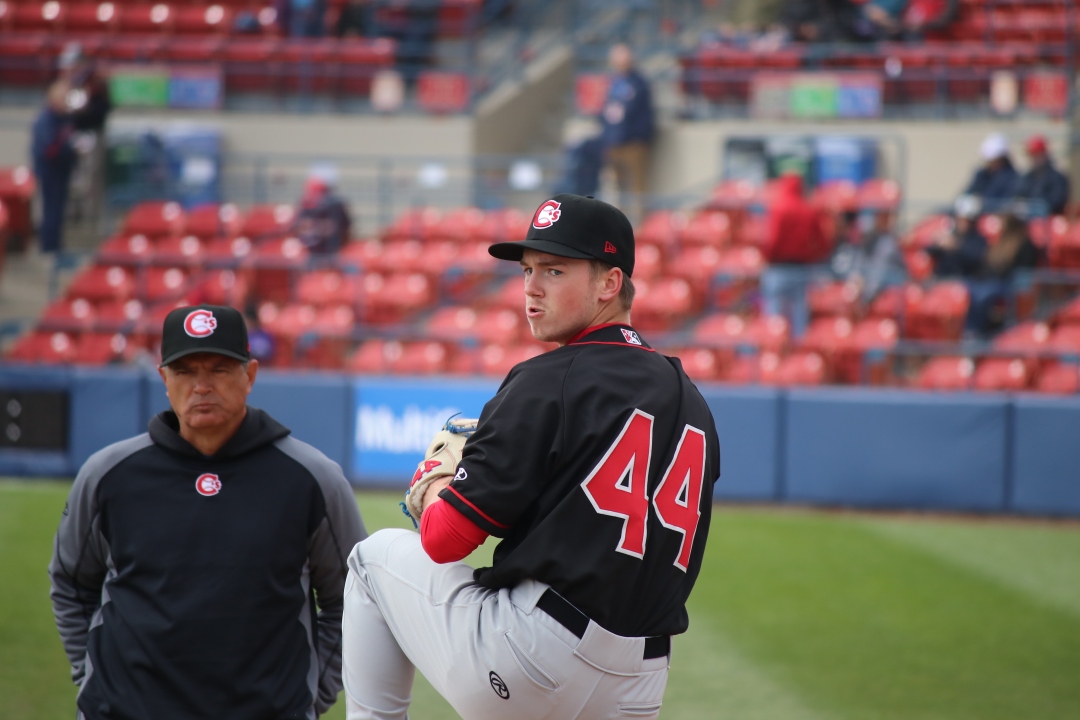 The Vancouver Canadians ended a two-game losing streak with a 6-0 victory over the Hillsboro Hops at Ron Tonkin Field Tuesday.

Zach Britton launched a home run into the Canadians left field bullpen to lead off the second inning against Hillsboro starter Scott Randall.

The top of the sixth saw the Canadians triple their lead when Leo Jiménez singled to center on Randall’s first pitch and he would trot home on an Addison Barger home run to deep right field.

The Canadians then doubled their lead in the top of the seventh against Hops reliever Bobby Ay. A two-out single to left by Trevor Schwecke and a base hit to right by Garrett Spain put a pair of men on base. A wild pitch by Ay moved Schwecke to third and Ay’s mishandling of a ground ball by Jiménez up the first base line and his throwing error down the right field line saw Schwecke come around to score. Jiménez stole second base and he and Spain would cross home plate on a Barger base hit to center.

Seven shutout innings by Sem Robberse made sure all that offence stood up. Sean Mellen and Thomas Ruwe finished up with a scoreless frame apiece to combine on a three-hitter.

Robberse allowed just four baserunners over seven innings. A Ryan Bliss one-out walk in the second inning was Robberse’s only free pass. Caleb Roberts blooped a single to left for the Hops first base hit in the fourth. Neyfy Castillo hit a two-out double to left in the seventh that deflected off a diving Barger at third base. Castillo did get to third on a wild pitch but Robberse ended his seven innings of shutout ball by striking out Cam Coursey swinging to give him seven Ks. Robberse also induced 11 of his 14 outs in play on the ground.

Robberse was given an error with two outs in the sixth when he dropped the ball on a throw from P.K. Morris while trying to cover the bag at first on a Del Castillo grounder. Robberse would make up for that by snaring a sharp comebacker to the mound to retire A.J. Vukovich for the third out.

Mellen entered the game in the eighth and loaded up the bases with one out by issuing walks to Jose Curpa and Tim Tawa and “hitting” Adrian De Castillo with a pitch. Replays on MiLB.TV seemed to indicate that Del Castillo was not hit in the arm. Umpires Hector Cuellar and Sean Sparling held a discussion and decided to award Del Castillo first base. Vancouver skipper Brent Lavallee argued the call but it was to no avail. Mellen rebounded by striking out Vukovich and getting Roberts to ground out to short.

Ruwe also had a bases loaded situation to deal with. He walked Bliss and gave up a single to Castillo to put the first two runners. Ruwe struck out Coursey and Axel Andueza but the bases were full after a walk to Curpa. The 6-foot-9 righthander would strike out the side when he got Tawa swinging to end the game.

Jiménez had the first hit of the game with a leadoff single in the first inning and drew the C’s first walk with a one-out free pass in the third.

After hitting his first homer of the season, Britton drove one to the warning track in deep center field but Tawa hauled it in with a over-the-shoulder catch. Britton also had a one-out walk in the eighth inning but he was forced out on the front end of a 4-6-3 double play hit by Miguel Hiraldo. Walks by Davis Schneider and Schwecke opened the ninth but they were left stranded.

Britton and Trevor Schwecke got on base twice with a knock and a walk. Garrett Spain had the other base hit. Davis Schneider had a walk but Riley Tirotta, P.K. Morris and Hiraldo each went 0-for-4.

Vancouver improves to 9-5 on the season and hold a half-game lead over Tri-City for first place in the Northwest League. As pointed out by C’s play-by-play announcer Tyler Zickel, the team has played a league-high 10 games against teams who have a winning record.

Game two of this series between the Canadians and Hops will see Hunter Gregory get the start for Monty’s Mounties. First pitch is at 6:35 p.m. on CanadiansBaseball and MiLB.TV. Naswell Paulino, Chad Dallas, Adam Kloffenstein and Trent Palmer are the other probable starters for Vancouver.