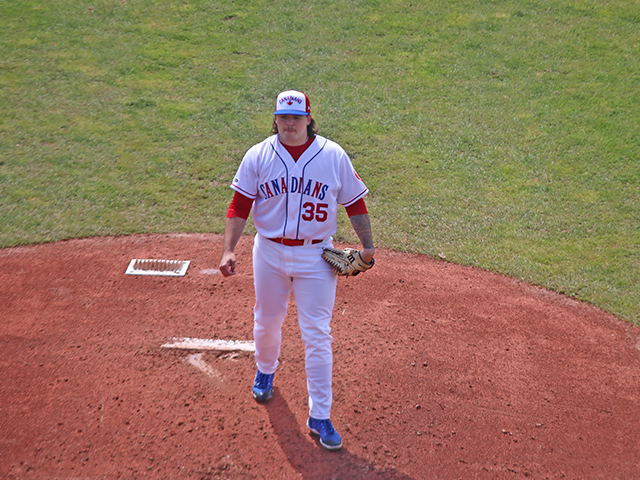 The Vancouver Canadians put an end to a four-game losing streak against the Hillsboro Hops with a 7-0 victory in the series finale at Ron Tonkin Field Sunday.

The C’s grabbed the lead in the second inning off Hillsboro starter Luke Albright. It began with an infield single by P.K. Morris to first base as Albright did not cover the bag after Spencer Brickhouse fielded the ball. A one-out walk to Davis Schneider put Morris at second and a two-out flyable to left by Garrett Spain got Morris over to third. Albright uncorked a wild pitch that bounced off the leg of Anthony Morales at the plate before going to the backstop. That allowed Morris to score and got Schneider over to third after stealing second on the play. Hillsboro manager Vince Harrison argued that Morales should have been awarded first base on a hit by pitch and Morris to be sent back to third but umpires Sean Sparling and Hector Cuellar did not agree so the run counted. Morales would ground out to second.

Addison Barger expanded the Vancouver lead to 2-0 in the third inning when he launched a one-out solo home run over the right field fence.

Miguel Hiraldo laced a stand-up triple to right-center to start the fourth inning and he would score the Canadians third run on a sacrifice fly by Schneider.

Vancouver would bust the game open in the seventh. Morales got aboard on a throwing error by Ryan Bliss at short to start the seventh and he got to second on a Roberts passed ball. After José Santamaria walked Zach Britton, Trevor Schwecke hit a broken-bat blooper that eluded a jumping Bliss at short to bring home Morales. A Barger grounder to first pushed Britton and Schwecke into scoring position. Riley Tirotta battled back from a 0-2 count to hit a ground-rule double to right on a 3-2 pitch score Britton and Schwecke. Morris also followed suit with an opposite field double down the left field to drive in Tirotta with run number seven.

The seven runs was more than enough for C’s starter Trent Palmer who retired all 18 men he faced. Alejandro Melean walked Tim Tawa to start the seventh to spoil the perfect game bid and the no-hitter went out the window when A.J. Vukovich reached base on an infield single to short. Barger made a diving stop on the play but could not flip the ball to second base in time. Melean uncorked a wild pitch to move the runners up but he got out of the inning when Adrian Del Castillo‘s fly ball to right was not deep enough to score Tawa. Caleb Roberts then lined out to Barger at short who dove for the second base bag with his glove to double off Vukovich for the unassisted inning-ending double play.

Britton opened the game with a single to center field on a 3-2 pitch that deflected off the glove of Cam Coursey who tried to make a sliding catch at second. Britton stole second with one out and went to third on a Caleb Roberts passed ball but Albright would strike out the side.

Tirotta had a two-out single to center in the third inning and a one-out walk in the ninth from Hops reliever Jake Rice but was left there both times.

Spain singled to right after Schneider’s sacrifice fly in the fourth but Spain was forced out when Morales hit into a fielder’s choice. Morales would make it into second on a throwing error by Bliss at short. Britton walked and he and Morales both advanced 90 feet on an Albright wild pitch but Schwecke popped out to first to end the inning.

Vancouver had a chance to add to their 7-0 in the eighth when Morales had a one-out single in the eighth against Marco Tineo. Britton forced Morales out at second on a 4-6 fielder’s choice but a Schwecke drive deep to right field was run down by Curpa at the warning track. Curpa managed to hang onto the ball despite colliding into the chain link fence.

Tirotta and Morris supplied 40 percent of Vancouver’s 10 hits with two apiece while Britton walked twice. All nine Canadians reached base and eight of them had a hit. Britton and Schneider both stole a base.

The C’s were only retired in order in the fifth and sixth innings by Jackson Goddard and Hugh Fisher.

Schwecke made a sliding catch shy of the warning track in right field to retire Brickhouse and conclude a 1-2-3 inning for Melean.

Barger showed good range to his left and threw out Curpa at first after a bang-bang play in which Curpa made a headfirst slide. Morris then snared a high throw from Tirotta at third to get Tawa and end the game.

The C’s had a clean game defensively after committing 15 errors over the previous 10 games in which the club lost seven according to the team’s press notes.

The only ball that was hit hard against Palmer was a line out to Spain in center by Brickhouse in the sixth inning. Morales then helped Palmer maintain his perfect outing when he pounced on a swinging bunt up the third base line from behind the plate to throw out Roby Enriquez at first.

After getting three groundball outs to begin his outing, Palmer struck out the side in the second inning and added two more in the fifth, ringing up eight in total. He also recorded six of his seven outs on the ground.

Melean retired the last eight men in a row to earn the three-inning save in his season debut in which he allowed a hit and a walk while striking out one. The 21 year-old Venezuelan righthander—who was activated off the injured list— is wearing number 18 for the C’s after wearing number 17 for them last season.

With the win, Vancouver is back over the .500 mark at 10-9. They are a half-game back of Tri-City for first place in the Northwest League but are in a three-way tie for second with Eugene, Hillsboro and Spokane.

Next up for the Canadians are the Everett AquaSox who are off to a 7-13 start to the year. The six game series at Nat Bailey Stadium begins Tuesday at 7:05 p.m. Wednesday’s and Thursday’s game are also at 7:05 p.m. The start time for Friday, Saturday and Sunday is 1:05 p.m.

Sem Robberse will pitch the series opener on Tuesday for Vancouver. The other probable starters listed are Hunter Gregory, Naswell Paulino and Chad Dallas.

2018 Canadians shortstop Vinny Capra made his major league debut for the Toronto Blue Jays during their 3-2 win over Houston at the Dome Sunday. He went 0-for-2 at the plate and was replaced by Raimel Tapia in left field for the final three innings. Capra did not see one baseball come his way in the seven spot.