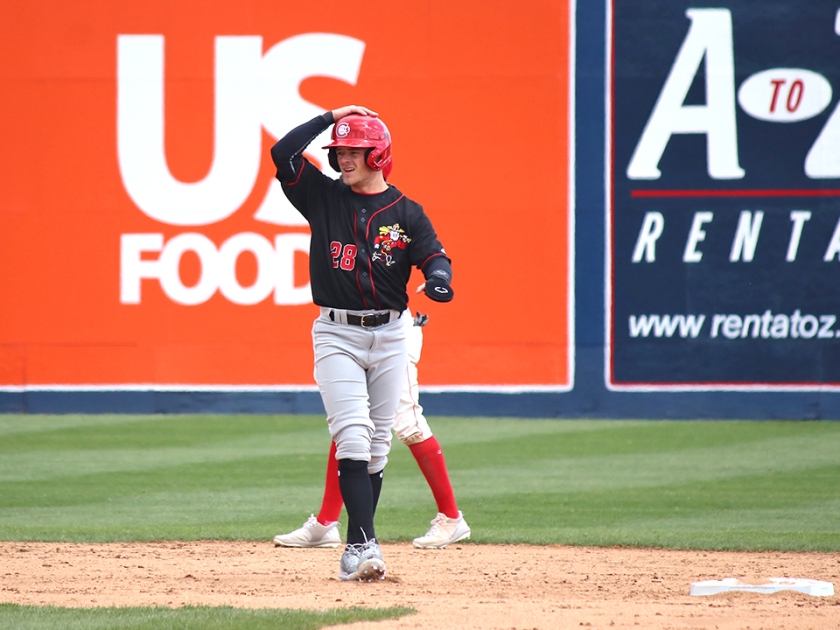 The Vancouver Canadians began the second half on a winning note by knocking off the Hillsboro Hops 5-3 at Ron Tonkin Field Friday.

The Hops took a 1-0 lead in the fourth inning off C’s starter Ricky Tiedemann. A four-pitch walk to Adrian Del Castillo with one out scored on a double to left-center by Tristin English.

The C’s got their first run courtesy of the long ball as Garrett Spain smacked a leadoff home run in the top of the fifth off Scott Randall.

Hillsboro retook the lead in the bottom of the fifth against Tiedemann when Shane Muntz started the inning with a double to left. He was advanced to third on a Danny Oriente groundout before Channy Ortiz singled to right just past the glove of Andrés Sosa at first off to get Muntz home.

A two-out rally by the C’s put them back in front in the seventh. Sosa had a base hit up the middle that snuck past a diving Ortiz at second against Gerald Ogando and would score on a hit-and-run Steward Berroa double to center. Berroa stole third and Mack Mueller walked to put runners on the corners. They would come in to score on an Addison Barger double off the center field wall to give Vancouver a 4-2 lead.

Spain put the C’s ahead by three runs with his second home run of the night with a one-out blast to right field off José Santamaria.

The Hops would not go away quietly as Neyfy Castillo and Muntz began the ninth with a walk against Will McAffer. A one-out free pass by Ortiz filled the bases but Spain ran down a Caleb Roberts fly ball in right-center, resulting in a sacrifice fly to score Castillo. Spain would catch the final out in center off the bat of Vukovich to end the game.

Tiedemann allowed his first baserunner by plunking A.J. Vukovich in the stomach with one out in the bottom of the first. Vukovich stole second but Roberts and Del Castillo sandwiched that by striking out before English grounded out to short.

Miguel Hiraldo made a nice play at second to retiring Danny Oriente to start the third inning as he shovelled a slow roller off the bat to beat Oriente by a step. Tiedemann speared a sinking liner on the mount off the bat of Vukovich as the lefty retired nine in a row before Del Castillo’s walk and English’s RBI double. That marked the first earned run Tiedemann gave up in 25 innings. Sosa helped Tiedemann to get the second out of the fourth with a diving stop at first and made a throw to Tiedemann to get Ryan Bliss but replays on MiLB.TV showed Bliss was actually safe. English would be stranded at third when Castillo struck out swinging.

Tiedemann’s outing came to an end just one out into the fifth after giving up a Roberts single that followed Ortiz’s RBI knock to put the Hops ahead again.

Garrett Farmer entered the game with runners on the corners but he got a 4-3 double play ball from Vukovich to end the frame.

The seventh inning led to another baserunner for Farmer when Barger was charged with an error at short that allowed Oriente to get to first to begin the frame. Farmer would get the next three men he faced by striking out Ortiz and getting a couple of outs on the fake turf.

The eighth saw Farmer bookend a three-up, three-down inning with strikeouts of Del Castillo and Bliss.

Farmer put up a zero in the sixth despite falling behind 3-0 to the first two hitters he faced. He retired Del Castillo on a fly ball to right before getting English to pop up to Britton in front of home plate. A couple of sharp singles by Bliss and Castillo to center and a double steal kept the inning going before Farmer got Muntz to tap one back to the mound for an inning-ending 1-3 putout.

Tiedemann tossed 4-1/3 innings and yielded two runs on four hits, a walk and a hit by pitch. He struck out six with five of his six outs in play on the ground. The Californian lefty threw 49 of his 80 pitches for strikes and his earned run average “ballooned” to 0.96.

Farmer improved to 3-0 on the season by allowing just two hits over 3-2/3 innings, stranding two runners and striking out three.

McAffer walked three and gave up a run in the ninth but struck out one to earn his second save.

The Canadians threatened to score off Randall in the second after the Hillsboro righty struck out the first four men he faced. Zach Britton doubled down to right and Spain took one for the team.as the ball appeared to graze his right foot.The runners moved up on a Hiraldo grounder to third but Hugo Cardona struck out swinging.

Vancouver had an opportunity to score in the fifth after Spain’s home run. Hiraldo hustled into second by sliding head first after a pop-up double landed fair near the right field line. Cardona’s slow bouncer to third got Hiraldo over to third. Hiraldo was thrown out as he was hung up between third and home on a sharp Sosa grounder to Bliss at short and he was tagged out on a 6-2-5 rundown. Berroa grounded out to first for the third out.

Damiano Palmegiani‘s two-out single to center with two outs in the sixth led to Randall’s exit from the game. Hugh Fisher entered the game and then a wild pitch before walking Britton to put men at first and second but Spain grounded out to first.

The C’s looked to pad their lead in the ninth when Sosa led off with a single to left against Santamaria and moved up to second on a wild pitch. Berroa walked and Barger was given an intentional free pass with one out to load the bases. The strategy for the Hops worked as Palmegiani popped up to second on a 3-1 pitch and Spain grounded out to first.

Spain and Sosa had two hits with Spain getting plunked to go along with his second and third home runs of the year. Berroa, Barger and Britton all had a double and a base on balls with Barger driving home two and Berroa swiping his 16th base.

Davis Schneider began the game in at third base but was replaced in the fifth inning by Cardona who moved in from left field after striking out in both of his plate appearances. Mueller took over the seven-spot and would later draw a walk and score a run.

Lefthander Jimmy Robbins gets the start for Vancouver as he will take on Luke Albright in a 7:05 p.m. start. The game is on CanadiansBaseball.com and MiLB.TV.