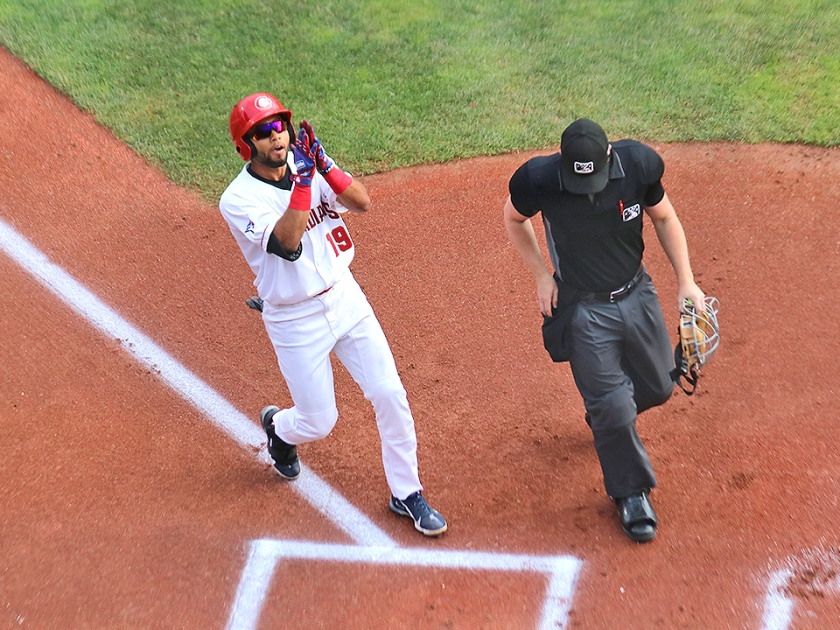 The AquaSox got the first run of the game against Chad Dallas in the second inning. Victor Labrada drew a leadoff walk, stole second and went to third on a Zach Britton passed ball before scoring on a single to center field by Trent Tingelstad.

The C’s would get on the board against Michael Flynn in the fourth. Damiano Palmegiani led off with an infield single to short and made it to second when Tyler Keenan tapped out softly to the mound. Miguel Hiraldo followed by lining a single up the middle to score Palmegiani.

Vancouver grabbed their only lead of the night in the fifth when Steward Berroa belted a home run off Flynn with one out to give the C’s a 2-1 edge.

That lead was gone two batters into the fifth when Noelvi Marte reached base on a Palmegiani throwing error at third before Kyle Lewis smacked a two-run homer to center off Dallas. Two outs later, Myles Miller kept the inning going with a base hit to left and he would score on a James Parker two-run dinger to left-center.

The Canadians responded in the sixth with a Palmegiani single to left and a Keenan double to right to put runners at second and third with nobody out. One out later, a ball four/wild pitch by Flynn saw Palmegiani cross the plate and Mack Mueller get on base. Hugo Cardona was then hit by a pitch to load the bases and Glenn Santiago also took one for the team to score Keenan.

The Frogs got the final two runs of the game off Ryan Boyer in the seventh. Gomez opened with a single to right and would score on base hits to left by Miller and Tingelstad with the latter’s hit coming with one away. Mike Salvatore drew a walk and though Boyer struck out Cole Barr and Marte, a wild pitch allowed Miller to score the game’s final run.

Palmegiani was the first Canadian to get on base with a two-out walk in the first but Rinehart struck out the side.

Mueller walked with one out in the second but was stranded.

Hiraldo stole second after his RBI single in the fourth but he was left on base.

The bases were loaded after Santiago was plunked in the sixth with one out to bring home a run but Anthony Morales grounded out into a 3-2 fielder’s choice that resulted in Mueller being forced out at the plate. Berroa then struck out swinging to leave the bags full.

Britton led off the seventh with a double to left off Peyton Alford but he did not get any further as Palmegiani popped out to second before Harry Ray and Hiraldo struck out swinging. Ray pinch-hit for Keenan and remained in the game at third base. Palmegiani moved over from third to first base to replace Keenan.

Britton had the final hit for Vancouver with a two-out single to left off Tim Elliott but Palmegiani was called out on strikes to end the game.

Palmegiani and Britton had two hits apiece with Palmegiani drawing a walk and Britton collecting his 10th double. Mueller was on base twice with a pair of walks. Berroa’s home run was his sixth of the season. Keenan recorded his 9th two-bagger while Hiraldo singled and swiped his 20th base.

Dallas got an assist from Berroa to get out of the first inning. Thomas walked with two outs and tried to get to third on a single to center but Berroa threw him out.

The third and fourth innings saw Dallas strand a runner in scoring position, leaving a Thomas one-out double and a Parker single at second base.

Over five innings, Dallas gave up five runs on seven hits and three walks. Only two runs were earned. He struck out two.

Naswell Paulino relieved Dallas in the sixth and worked around a Salvatore leadoff walk and a Marte one-out single to left by striking out Ty Duvall and Thomas.

Boyer was charged with two runs on three hits and a walk but struck out the side in the seventh.

Will McAffer worked a clean eighth inning that includes strikeouts of Duvall and Thomas.

The C’s look to Ricky Tiedemann to turn the tide Friday in what could very well be his final start with the club. The Futures Game All-Star will pitch against Jimmy Joyce at 7:05 p.m. on CanadiansBaseball.com.