Joe Biagini pitching for the Salem-Keizer Volcanoes at Nat Bailey Stadium in 2012.

During an interview with broadcaster Rob Fai,  Biagini was asked to reflect on his brief time at Nat Bailey Stadium as a member of the Salem-Keizer Volcanoes. The Redwood City, California native got the start against future teammate Roberto Osuna during a game on August 2, 2012.  It was Osuna’s first start in Vancouver, just days after his Northwest League debut July 27 in Everett in which he struck out 13 batters over five shutout innings.

Roberto Osuna made his Vancouver debut against Joe Biagini in 2012.

Biagini and Osuna did not have a great time of it on the mound that day and neither figured in the decision in what turned into an eventual Vancouver victory. Biagini joked his one-inning outing that day proved he was contributing to the Blue Jays before he became a Blue Jay. Despite that, Biagini said he enjoyed his time to Vancouver, calling it one of his favourite places to visit and enjoyed pitching at “vintage” Nat Bailey Stadium.

When asked about where he was when he was drafted by the San Francisco Giants in the 26th round of the 2011 draft, he was in the bathroom at the time. He said he found out later from his father.

After making the Blue Jays out of Spring Training, Blue Jays manager John Gibbons and pitching coach Pete Walker joked with Biagini before an appearance that he was there to provide “comic relief”.

One highlight for Biagini was getting to pitch against the Giants, the team he grew up rooting for, last season by retiring the only hitter he faced in front of family and friends at AT & T Park in a game on May 7.

Biagini – the only Blue Jays pitcher to pitch against Baltimore, Texas and Cleveland in the playoffs – said he felt fortunate to pitch in the American League Championship Series and does not take it for granted, noting not every player gets a chance to play in the postseason. He finished the regular season with a 4-3 record, a 3.06 earned run average, an ERA+ of 141 and struck out 62 batters in 67-2/3 innings. He added 7-1/3 shutout frames in the playoffs.

To hear from Paul Beeston at the luncheon, click here. 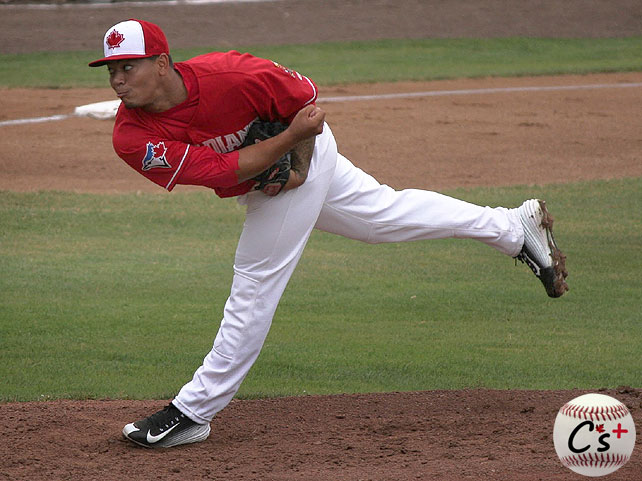 Clinton Hollon pitching for the C’s in 2015.

Per Charlie Caskey of YourVanCs.com, it was learned after the luncheon that the Jays had released 2013 2nd round pick Clinton Hollon. The right-handed pitcher pitched for the C’s and the Lansing Lugnuts in 2015 but did not make it back to the mound in 2016 due to drug suspensions. Gideon Turk of Toronto Baseball Prospectus looks back on what went wrong for Hollon.

The Blue Jays recently announced their managing/coaching hires for the minor league system in 2017. For Vancouver, it means the return of Rich Miller as manager, Jim Czajkowski as pitching coach and Dave Pano as hitting coach. Miller was the manager when the C’s won its first Northwest League title in 2011.

With the calendar now reading 2017, I felt it was time to change things up a bit at the blog formerly known as Niall On Baseball. The new name is C’s Plus. Why C’s Plus? With the mission statement of this blog being the attempt to gain at least a ’50’ grade on the 20-80 scouting scale, the grade C+ plus could be considered average. This blog mostly focuses on the C’s (the Vancouver Canadians Northwest League baseball club) with the plus representing not only observations and photos of C’s games but other games I am able to attend to outside the friendly confines of Nat Bailey Stadium. New name but same low price! Happy New Year! ;D