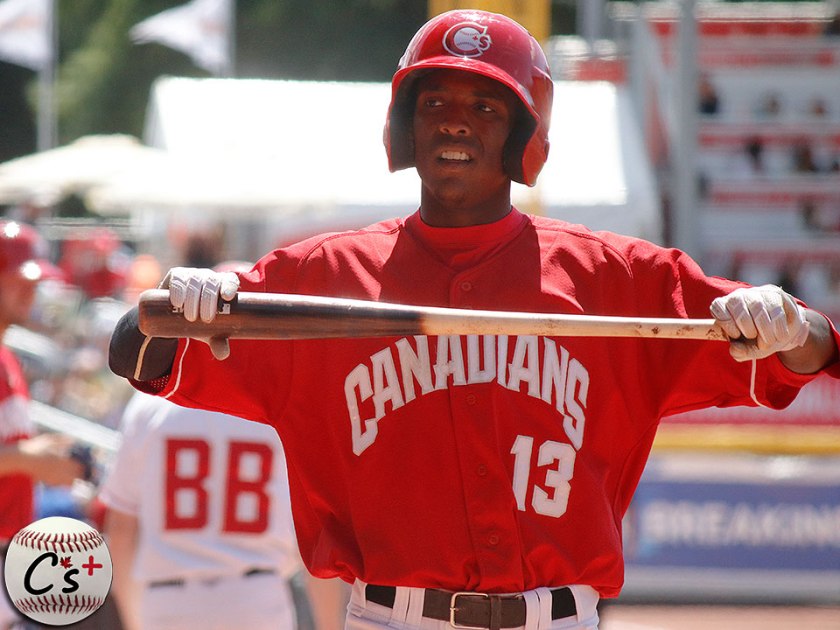 The Vancouver Canadians combined a lack of clutch hitting with poor baserunning and that was too much to overcome as they dropped a 6-1 decision to the Hillsboro Hops at Nat Bailey Stadium Sunday afternoon.

Dalton Rodriguez got his turn in the rotation and he had a first-and-third situtation to deal with after a Bryan Araiza walk and a Pavin Smith but he got out of the first by getting Drew Ellis to pop out to short. Rodriguez—who struck out Eudy Ramos in the first—added two more whiffs in the second by getting Tim Susnara and Ryan Grotjohn enroute to a 1-2-3 second.

The third inning was a different story for Rodriguez as he walked the number nine hitter Billy Endris and advanced the runner to second on a wild pitch. Ramos would pick up a two-out hit to left to score Endris.

Cullen Large smacked a triple to right field to start the bottom of the third off Hops starter Conner Gray but Bryan Lizardo hit a tapper back to the mound before Grey snared a liner off the bat of Norberto Obeso and threw to third to pick off Large for a backbreaking inning-ending double play.

Rodriguez kept the Hops off the board in the fourth despite a couple of singles from Ellis and Connor Owings by striking out Endis. Reggie Pruitt laid down a perfect bunt in front of the mound to get on base to start the bottom of the inning. He stole second and third but Kevin Vicuna and Kacy Clemens struck out and Riley Adams flied out to right to leave another runner 90 feet away in as many innings.

The Hops would get to Rodriguez in the fifth when Duzenack was hit by a pitch and got to second on a wild pitch. Araiza would draw a walk before a one-out single by Smith plated Duzaneck with Hillsboro’s second run. Bobby Eveld was summoned from the bullpen and he plunked Ellis to load the bases. After inducing a tapper back to the mound for a force play at home off the bat of Susnara, Grotjohn worked a full count walk to bring home Araiza. 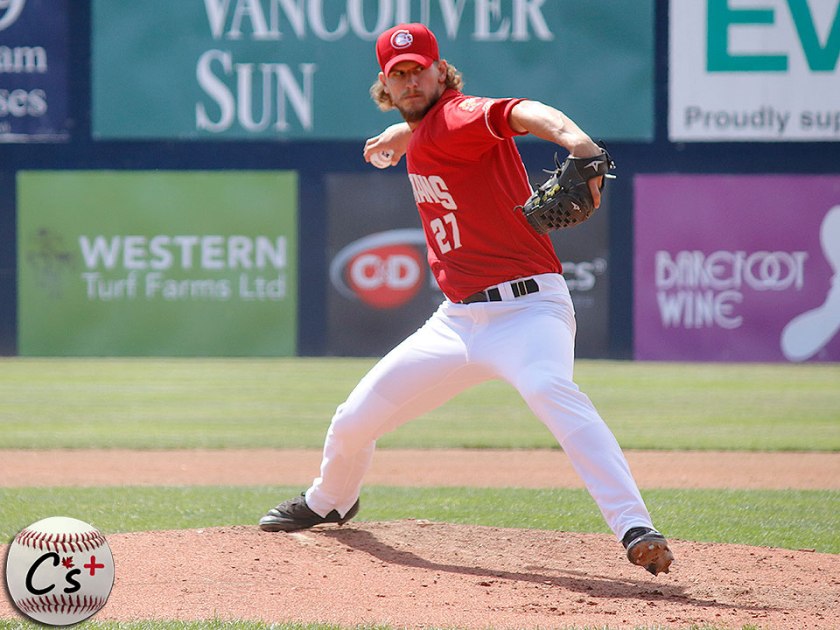 The bottom of the fifth and the top of the sixth saw the side retired in order but a one-out triple by Obeso gave the C’s another runner 90 feet away from scoring. Pruitt would strike out before Vicuna got hit in the arm by another pitch in as many days. Vicuna would be thrown out trying to steal second to end the inning.

Norberto Obeso had one of two Vancouver triples but neither of them scored.

Eveld faced the minimum in the seventh after a 3-6-3 double play ball erased a single by Ramos. Clemens would begin the Vancouver seventh with a walk and got to second on an Adams groundout. David Jacob would drive Clemens home to cut the Hops lead to 3-1. Rafael Pujols relieved Gray and issued a walk to Brock Lundquist but he retired Large on a fly ball to center and struck out Lizardo to stop the threat.

David Jacob drove in Vancouver’s only run with an RBI single Sunday.

Yonardo Herdenez—who has spent time with New Hampshire, Lansing and Bluefield this season—made his Canadians debut and it did not go well. The first pitch the 21 year-old Venezuelan threw was drilled for a double to right by Susnara. Owings would score Susnara with a base hit before Duzenack belted a two-run homer into the home run porch in left field to increase Hillsboro’s lead to 6-1.

The C’s tried to cut into that lead in the eighth when Pruitt lined a solid single up the middle before Vicuna reached on a fielding error by pitcher Matt Brill. Clemens would work the count to ball four to load the bases but Adams would ground out into an inning-ending twin killing.

Herdenez got away with a couple of walks in the ninth but the C’s did nothing in their half of the ninth against Anfernee Benitez to drop their second in a row. Pruitt had the lone two-hit game while Clemens walked twice. The C’s had just one hit in 10 opportunities with runners in scoring position and left six men on base.

Rodriguez struck out five in 4-1/3 innings but was charged with three runs on five hits and three walks to drop to 2-4 on the season. Eveld allowed an inherited run to score but compiled 2-2/3 innings of shutout ball. Herdenez did strike out one over his two innings.

2014 C’s outfielder Roemon Fields singled and stole his 23rd base for the Buffalo Bisons in another loss to Scranton. Dwight Smith Jr. (2012) singled and walked and Jon Berti (2011) had the lone extra-base hit.

Josh Palacios (2016) doubled twice and singled and Nash Knight singled twice and walked to help Lansing wallop Wisconsin. Javier Hernandez (2016-2017) also had a two-hit game that included his first home run of the year. Andy Ravel (2016) lasted 6-2/3 innings and gave up just two runs (one earned) with a K/BB total of 7-0. Nick Hartman (2016) stranded two runners for Ravel and got four outs while Geno Encina (2016) got the final three outs.

2017 C’s Chavez Young and Yorman Rodriguez had two hits apiece and Jesus Severino had one as Bluefield got by Danville. 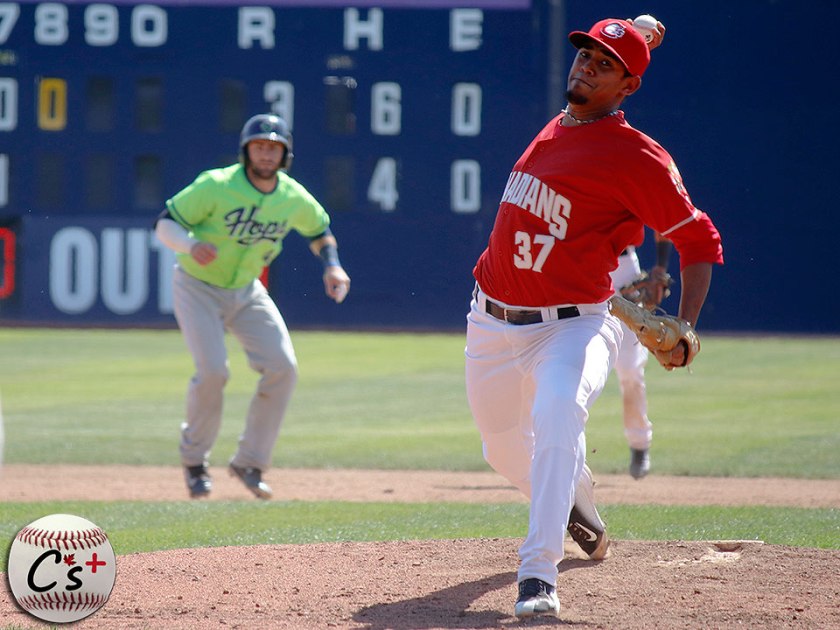 Now wearing #2, Polizzi had worn #37 when he first joined the C’s but now Yonardo Herdenez owns those digits. The righthander was called up from Bluefield after four appearances in which he posted a 7.71 ERA but had a K/BB total of 6-0. He made two appearances for New Hampshire and Lansing earlier in the season.

The Vancouver Canadians got a break from the Boise Hawks as they defeated the Tri-City Dust Devils Sunday evening to remain two games clear of first place in the North Division. The C’s and Hops play Game 3 of this series Monday night at 7:05 pm. CanadiansBaseball.com and TSN 1040 will carry the game.