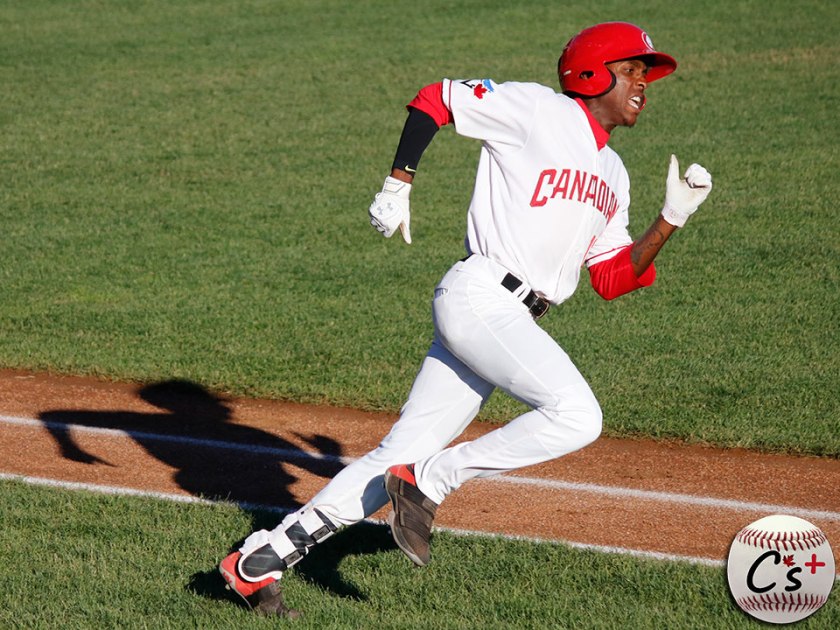 The Vancouver Canadians have made sure they will not suffer another five-game sweep at the hands of the Hillsboro Hops. It took seven tries but the C’s finally defeated the Barley Boys as they prevailed by a score of 4-2 at Ron Tonkin Field Friday.

The C’s took a 2-0 first inning when Kevin Vicuna and Kacy Clemens singled to put runners on the corners with one out. A wild pitch from Tyler Vail allowed Vicuna to cross the plate with the game’s first run. David Jacob—who had a front row seat in the batter’s box for that wayward offering—smacked a ground-rule double to left to cash in Clemens. Vail would strike out the side by catching Brock Lundquist and Cullen Large looking after getting Reggie Pruitt swinging to start the game.

Zach Logue was given the start for Vancouver and he allowed Camden Duzenack to reach on a base hit before advancing to second on a wild toss. Logue got Bryan Araiza to fly out and got Luis Lara to strikeout but a single from Pavin Smith scored Duzenack with the Hops’ first run.

Logue had to deal with another runner in scoring position in the second when Tra’mayne Holmes singled before he went to second on a balk. He would strand Holmes with a strikeout of Ryan Dobson and a groundout by Jorge Perez.

Pruitt legs out an inside the park home run @vancanadians pic.twitter.com/ii8zPrrflg

Vancouver—who went down in order in the second—would restore their two-run advantage when Reggie Pruitt got to fly around the bases uninterrupted for an inside-the-park home run to start the third. He drove the ball over the head of Holmes in center field and it wound up rolling all the way to the wall. Pruitt would score standing up and his batting helmet remained on but barely. That was Pruitt’s first pro home run in 465 at-bats.

Pruitt ran that inside the park HR, unofficially, in 14.58 seconds @vancanadians pic.twitter.com/VkoxSlDyU7

The C’s would load up the bases later in the frame on a two-out rally when Jacob walked and went to third on a Lundquist ground-rule double. Large was then hit by a pitch but Vail would strike out the side again as he got Norberto Obeso looking after getting Vicuna and Clemens swinging.

Logue had to deal with Duzenack again when he singled to start the home half of the third. Smith would draw a two-out walk but Logue escaped further damage but getting Drew Ellis to ground out.

The C’s went down in order in the fourth and the Hops only got three men to the plate against Justin Dillon—the listed probable starter for this game—after Tim Susnara singled before being doubled off when Dobson lined into a 4-3 double play.

Vancouver had a runner aboard in the fifth when Clemens drew a one-out walk but Holmes robbed Jacob of a hit with a diving catch to stop that rally from developing any further. The Hops had something cooking in their half of the frame when Perez worked a leadoff walk before Lara collected a two-out base hit. Perez and Lara pulled off a double steal but Dillon got Smith on a called strike three to snuff out that threat.

Deiferson Barreto singled with two-out but he would not make it any further in the top of the sixth. Angel Alicea took over for Dillon and got help from catcher Matt Morgan as he pounced on a bunted ball to retire Ellis for the first out. Alicea gave up a double to Susnara before striking out Holmes for the second out but Dobson singled home Susnara to bring Hillsboro to within a run at 3-2.

Luis Castillo replaced Vail to start the seventh but he could not keep the C’s in check. He plunked Pruitt with a pitch and—after a Vicuna groundout advanced Pruitt to second—Clemens came through with a double to bring Pruitt back to the pentagon again.

Alicea set down the Hops in order in the seventh and Orlando Pascual would turn the trick again in the eighth. Castillo also had a 1-2-3 eighth before Matt Peacock took over in the ninth. Pruitt would get on base again with a single and steal second but was doubled off when Vicuna lined to short for an unassisted inning-ending double play.

After being democratic with three groundouts in the eighth, Pascual—if you go by Crash Davis‘ words in Bull Durham—was downright boring and fascist by striking out the side as Holmes, Dobson and Perez all went down swinging to clinch Vancouver’s first win of 2017 against Hillsboro.

Pruitt and Clemens were tied for on-base honours by getting aboard three times. Pruitt had a single and a hit by pitch to go with his inside-the-park homer and stole his 21st base of the year. The fleet center fielder was hitting .094 after Canada Day but is now up to .230. Clemens doubled, singled and walked and now has an on-base percentage of .396 this season to go along with 14 extra-base hits—8 doubles, three triples and three home runs.

The C’s were 2-for-7 with runners in scoring position, leaving eight men on. They had eight hits, two walks and two hit by pitches to offset 12 strikeouts.

Logue gave up one run on four hits and a walk while whiffing two in three innings. Dillon picked up his first win by navigating around two hits and a walk with two punchouts in two frames. Alicea allowed a run on two hits but struck out one in two innings. Pascual was perfect over his two innings to pick up his second save. That gave C’s hurlers a K/BB total of 8-2.

It’s been a hot couple of days in Hillsboro according to C’s first baseman/meteorologist David Jacob.

Update: Outside temp is 104°F. They shot a temperature gun on the turf and it read 147°F

The third game of this five-game set is set for Saturday at 5:03 pm. Juan Nunez is listed as the probable starter for the C’s.

Vancouver has a record of 4-5 in the second half of the season. Spokane leads the North with a 7-2 record while Tri-City is at 5-3. Hillsboro is tied with Eugene for top spot in the South at 5-4.