Nate Pearson is going to make Toronto Blue Jays fans get over the loss of slugger Edwin Encarnacion if he continues to pitch the way he did Sunday afternoon. Pearson was the compensation draft pick the Jays received when Encarnacion signed with Cleveland and the 28th overall pick in the 2017 draft may have turned in the most dominant first inning ever seen at Nat Bailey Stadium in the Vancouver Canadians‘ 5-4 victory Sunday afternoon.

The College of Central Florida product meant business as he bid good morning, good afternoon and good night to Malique Ziegler as he struck him out looking on three pitches to begin the game. Bryce Johnson was also gone on three pitches as he went down swinging. Pearson threw seven consecutive strikes and needed just 11 pitches in total as he whiffed Logan Baldwin to strike out the side.

Salem-Keizer starter Stetson Woods hit Reggie Pruitt with a pitch after an eight-pitch battle but Norberto Obeso hit into a double play to pull the plug on that rally.

Ryan Kirby was the first Volcanoes player to put the ball in play against Pearson to start the second but he lined out to Brandon Polizzi in right field. Kirby’s teammates Orlando Garcia and Shane Matheny would not fare as well as they both struck out to give Pearson five K’s out of the first six batters of the game.

Samad Taylor tried to make something happen for the C’s as he took one for the team wtih two outs in the home half of the second and managed to steal second base. He pushed his luck by trying to steal third as he was pegged by Dylan Manwaring to take the bat out of the hands of Owen Spiwak.

Pearson went into uncharted territory by coming back out for the third inning after his first three starts lasted two innings apiece. Junior Amion lined out to right but Manwaring became the first Salem-Keizer baserunner by running the count to ball four. Pearson answered that with a strikeout of Tyler Brown before his batterymate Riley Adams picked off Manwaring at first from behind the dish on a 1-3-4 play. The bottom of the third saw just one baserunner in the form of a Bryan Lizardo walk as both teams remained hitless after three.

The Volcanoes were glad to see the man wearing #32 on the Vancouver mound leave the game for #33, righthander Brayden Bouchey. Ziegler was especially glad as he jumped on a full-count offering by sending the ball over the wall in left-center field to give Salem-Keizer a 1-0 lead. Johnson then bunted his way aboard as Bouchey could not get to the ball in time down the first base line. The Volcanoes tried the short game again but Baldwin’s bunt wound up in the glove of Kacy Clemens in foul territory on the first base side. Bouchey would get the next two hitters, including an inning-ending strikeout of Garcia. Before that, Warmoth went over to cover second as the hit-and-run was on but Warmoth was able to scramble back to his right and made a throw that just got Kirby. Volcanoes skipper Jolbert Cabrera argued the call

The C’s finally got to Woods with two outs in the Vancouver third. Clemens received a free pass before Adams got one through on the right side for the C’s first hit. Samad Taylor would pull one down the line in left to score Clemens with the tying run. Spiwak had a chance to extend the inning with runners on second and third but he struck out looking.

Lefthander Brody Rodning was brought on for Bouchey in the fifth inning and he had a 1-2-3 frame that featured a punchout of Amion and a nice diving catch by Obeso in left. Lizardo would double to begin the home half of the fifth and he would get to third on a wild pitch but Woods kept him there as he struck out the side in order.

The Volcanoes began the sixth with a triple by Tyler Brown as his fly ball off Rodning sailed over the head over Polizzi in right field. Ziegler then walked to put runners on the corners with nobody out. What happened next turned out to be the turning point of the game. Johnson hit a ground ball to Lizardo and the Dominican third baseman looked Brown back to third but as soon as Lizardo threw to second, Brown broke for home. Taylor stepped on second to force out Ziegler before throwing the ball home where Adams tagged out Brown for a 5-4-2 double play. Though Rodning plunked Baldwin, he would get out of the inning by getting Kirby on a fly ball to center.

Owen Spiwak snapped a 1-1 tie with a two-run single in the sixth Sunday afternoon.

After being lost against Woods, the C’s were glad to see a new pitcher in Garrett Cave when they went to bat in the sixth. Clemens started the one-out rally with a base hit before Adams and Taylor walked to load the bases. Spiwak redeemed himself by grounding one up the middle on a 3-2 pitch after being down 0-2 to score Clemens and Adams. A wild pitch scored Taylor from third to increase Vancouver’s lead to three. Lizardo would push the lead to four by knocking one up the middle to score Spiwak, who awkwardly stopped between third and home before righting himself to touch the pentagon. That got a good laugh from his teammates when Spiwak returned to the dugout.

Bryan Lizardo had a perfect day at the plate against Salem-Keizer.

The Volcanoes would not go away in the seventh when Rodning walked Garcia and Matheny before Amion doubled to right to plate Garcia. RBI groundouts by Manwaring and Brown scored Matheny and Amion to chop the C’s lead to one run. Rodning’s issues with the strike zone continues when he walked Garcia and Johnson. Rodning was pulled from the game for Yonardo Herdenez and he struck out Baldwin swinging to preserve Vancouver’s slim lead.

The C’s got a double from Pruitt when he lined one to left to open up the their portion of the seventh. Obeso dropped down a perfect bunt down the first base side to get Pruitt over to third. Pruitt tried to score on a Logan Warmoth grounder to third but he was thrown out by Matheny. Pruitt felt he beat the tag of Manwaring at the plate but the umpire disagreed. After reaching on the fielder’s choice, Warmoth stole second but he would not score.

Kirby had a base hit to start the eighth against Herdenez and he was bunted over by Garcia. Herdenez made sure pinch-runner Christopher Burks stayed put as he got Matheny to fly out to right before spearing a comebacker by Amion to end the threat.

John Russell took over for Cave and set down Vancouver in order to give the Volcanoes one last kick at the can. Orlando Pascual arrived out of the C’s bullpen to make sure no can would be kicked as he struck out pinch-hitters Kevin Rivera and Dalton Combs to open the ninth. Ziegler—who went yard once already—nearly did it again but his long drive to left field was just foul. Pascual would eventually put Ziegler away by striking out the side, all swinging, to clinch the win for the home side.

Nate Pearson lit up the radar gun with this offering at 100 MPH.

Pearson began the game with three straight pitches at 99 miles per hour. His first two strikeouts were 99s and he completed striking out the side with a heater at 98. He also reached 100 on three occasions, including one of his strikeout victims. His lowest offerings with his breaking-ball in the 80 and 84-85 range and a changeup at 92. 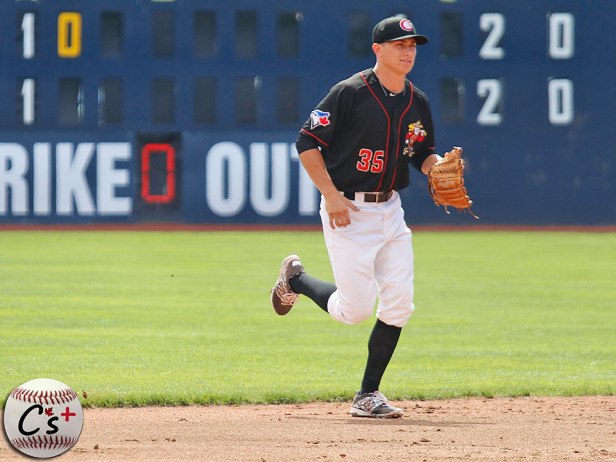 Brody Rodning earned his fourth victory of the season against Salem-Keizer.

Pearson struck out six and walked one over three innings, managing to face the minium. Bouchey gave up a homer and a bunt single but struck out. Rodning was credited with the victory but walked five and struck out one, giving up three runs on two hits over 2-2/3 innings. Herdenez stranded both runners he inherited and pitched 1-1/3 innings of one-hit ball. Pascual struck out the side in the ninth, just like William Ouellette did Saturday night. C’s pitchers struck out 12 and walked six.

Lizardo was 2-for-2 with a walk and a run batted in. Clemens, Adams and Taylor had a hit and a walk apiece with Clemens scoring twice and Taylor getting a double and stealing a base. The C’s were 3-for-9 with runners in scoring position, leaving five men on. They had 11 baserunners on seven hits and three walks.

In roster news, righthander Andrew Deramo is not going to join the C’s. He has been reassigned back to Lansing.

Always capable defensively and on the basepaths.

Donnie Sellers is the next man up on the mound for the C’s as they carry on with this five-game set. Game time is 7:05 pm at Nat Bailey Stadium and can be heard on CanadiansBaseball.com and TSN 1040.

The C’s are tied with Tri-City for first place in the Northwest League North Division at 10-8. Everett and Spokane are one game back.