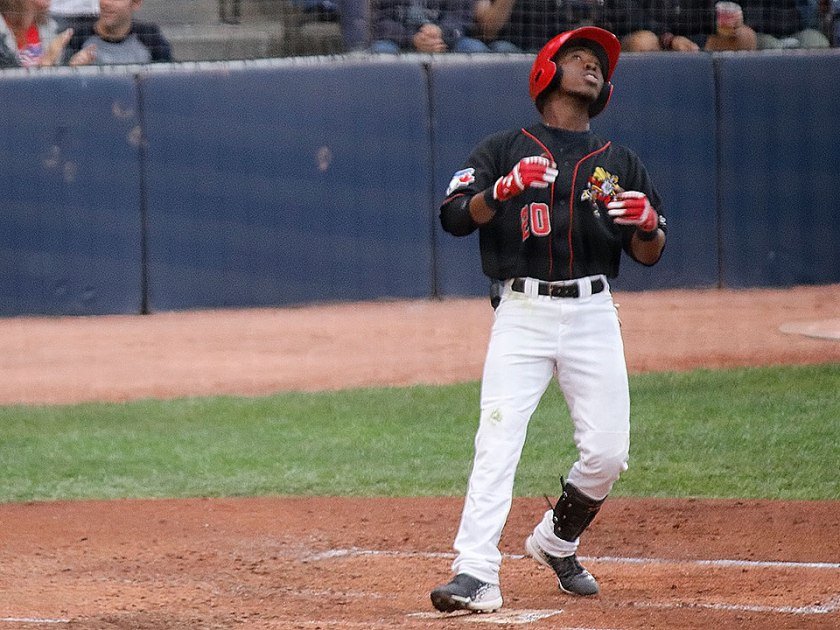 The Vancouver Canadians executed on offence, defence and pitching to double up the Salem-Keizer Volcanoes 4-2 at Nat Bailey Stadium Saturday night. With the win, the C’s reached the 30-victory plateau to surpass the short-season franchise-worst 29 wins from a year ago.

Dalton Rodriguez walked Malique Ziegler on four straight pitches after getting ahead 0-2 to begin the contest but Rodriguez redeemed himself by picking off Ziegler at second to help him keep the Volcanoes at bay. Kevin Vicuna covered the bag from short and strategically got a knee in the way when he tagged out Ziegler.

The C’s also got their leadoff man aboard as Reggie Pruitt raced down to first on an infield single against Salem-Keizer starter Greg Jacknewitz. Shortstop Manuel Geraldo got to the ball but a slight hesitation in throwing it gave Pruitt the time he needed to beat the throw. Pruitt was able to read the move of the lefty Jacknewitz, getting a tremendous jump and stealing second base easily. Pruitt then got up and ran to third after catcher Chris Corbett chucked the ball into center field. Kevin Vicuna hit a comebacker to the mound but Kacy Clemens picked up the slack with a groundball single to left score Pruitt with the first run of the game. David Jacob had a single to get Clemens over to second but Norberto Obeso ended the threat by grounding into a 6-3 double play.

The Volcanoes would respond in the second when Ryan Kirby and Orlando Garcia opened with singles to put runners at first and third. Rodriguez would strike out Geraldo and it looked like the C’s converted a strike’em out-throw’em out double play as Matt Morgan tried to nail Garcia trying to steal second but Vicuna could not hold on to the throw and was charged with a tough error as a result. A sacrifice fly by Michael Sexton would score Kirby with the tying run but Rodriguez rung up his second batter of the inning as Corbett flailed away at strike three.

After Brock Lundquist flied out for the first out of the bottom of the second, Samad Taylor stepped up and swatted an opposite-field home run that got over the tall wall in right field to put Vancouver back on top. Bryan Lizardo reached on a Kirby error at first but the C’s could not push across another run.

Rodriguez walked Kevin Rivera to start the third and he would eventually wind up on third with a stolen base and a groundout. Rivera would not score as Lizardo made a terrific defensive play at third by coming in on a groundball to retire Logan Baldwin on a close play at first to keep Salem-Keizer from pulling even.

The home half of the third saw Clemens double off the wall in center with one out and Obeso joined him on the basepaths with a walk but that was all the home side would muster.

The Volcanoes got their leadoff man on base in the fourth when Kirby singled but Rodriguez got three groundball outs to stop Salem-Keizer in their tracks.

The bottom of the fourth looked like it was going to be a quick one after two groundball outs but Morgan extended the inning with a walk. He then surprised everyone in the park by stealing second easily off the lefty Jacknewitz without a throw from the plate. Pruitt then reached first when Jacknewitz made a throwing error from the mound that moved Morgan to third. Volcanoes manager Jolbert Cabrera decided to bring in Luis Pino out of the bullpen but the move backfired. Pino could not strand the two runners he inherited as he gave up back-to-back singles by Vicuna and Clemens to score Morgan and Pruitt, providing Vancouver with a 4-1 cushion.

The Volcanoes managed to get another leadoff hitter on base in the fifth when Corbett singled but Rodriguez would get the next three batters after that, turning that trick for the third time in a row thanks in part to striking out Ziegler looking.

Salem-Keizer went 6-for-6 in getting the first batter on base in the inning when Baldwin reached on an infield knock to third. Lizardo made a nice play to snare the ball on a dive but could not find the handle on it. Rodriguez issued a walk to Kirby and that led C’s manager Rich Miller to make a call to the bullpen. Chris Hall came into the game and added to the trouble when he threw a wild pitch to move Baldwin and Kirby 90 feet closer to home. He limited the damage to a Garcia RBI groundout to second, striking out Geraldo and Sexton to snuff out the rally.

Logan Webb mowed down the C’s in order in the bottom of the sixth. Like Webb, Hall was hoping for an easier seventh and he was two-thirds of the way to getting it with two groundball outs. Trouble started brewing when Ziegler made it on base with an infield single to third and Johnson followed with a base hit up the middle. Another Hall wild pitch moved the runners into second and third but he struck out Baldwin swinging to maintain the C’s two-run lead.

Jacob reached on an error by Geraldo at short in the home half of the seventh but the C’s could not take advantage of the extra out. William Ouellette was summoned from the pen for the top of the eighth and Salem-Keizer managed to get another leadoff man aboard on a Kirby base knock. Ouellete would get an inning-ending 4-6-3 double play that saw Taylor make a quick flip to Vicuna at short and Jacob stretching to his right at first base to send Salem-Keizer away once again.

Taylor got his second opposite-field hit of the night when he dropped a single into right field but he only got as far as second as the C’s could not increase their lead.

Salem-Keizer began the ninth with two consecutive pinch-hitters in Shane Matheny and Dalton Combs but the end result was the same—a strikeout swinging. Ouellette would strike out the side as he froze Rivera to lock down the victory.

The Vancouver Canadians were led by Clemens and Taylor as they provided the bulk of their eight hits with Clemens getting three and Taylor collecting two. Pruitt stole his 22nd base of the year and scored twice. The C’s were 3-for-10 with eight men left on.

Rodriguez boosted his record to 5-4 with five-plus innings of two-run ball (one earned) on five hits and three walks while striking out three. He made sure the infield was not bored as they handled nine of his 10 outs in play. Hall struck out three over two shutout frames of two-hit ball for his third hold. Ouellette recorded his eighth save with a one-hitter over two innings that included three game-ending K’s.

The middle game of this five-game series is set for Sunday afternoon at 1:05 pm at The Nat. That game can be heard on CanadiansBaseball.com and TSN Radio 1410.  Nate Pearson is the probable starter for Vancouver, who are now 9-8 in the second half of the season. Saturday’s win pulls the C’s into a first-place tie with Spokane and Tri-City while Everett is a game behind at 8-9.