2, 4, 13, 15, 19, 31. Those were not the winning lottery numbers for the Vancouver Canadians as they dropped a 6-2 decision to the Salem-Keizer Volcanoes at Nat Bailey Stadium Friday night. The loss drops Vancouver’ second-half record to 8-8, leaving them one game behind Spokane and Tri-City in the North Division.

Here’s a breakdown of how the C’s lost this one by the numbers.

Riley Adams drove in the first run of the game and had a three-hit performance.

The game started well enough for the C’s when Juan Nunez got two quick outs. Bryan Lizardo fielded a bunt at third to retire Malique Ziegler before Nunez struck out Bryce Johnson. Lizardo nearly made a second tough play with a roller towards third but Logan Baldwin beat it out to reach first. However, Baldwin could not beat the ball to second on a stolen base attempt as Riley Adams threw him out from behind the dish to wrap up the first half-inning.

The C’s looked to build on that momentum in their first at-bat and their first three hitters got on base with Reggie Pruitt punching a single to left, Norberto Obeso singling to right and Logan Warmoth smashing one down the third base line. Warmoth’s drive was knocked by Shane Matheny and that saved at least a run if not two. With the bases loaded, Volcanoes starter Jason Bahr struck out Kacy Clemens for the first out. Adams would get Pruitt home by reaching base on a fielder’s choice that forced out Warmoth at second but that was all Vancouver got as David Jacob went down swinging.

Both teams traded 1-2-3 innings in the second with Nunez striking out Ryan Kirby and Manuel Geraldo to bookend an Orlando Garcia groundout. Samad Taylor—making his C’s debut wearing #20—struck out in his first at-bat against Bahr.

After retiring six in a row, Nunez could not make it seven despite sawing off the bat of Robinson Medrano but Warmoth was charged with an error at short. It appeared Warmoth may have been distracted by the broken bat. That started the snowball which became an avalanche as Nunez threw two wild pitches that pushed Medrano to third. A walk to Rob Calabrese, a passed ball and a free pass to Matheny all resulted in the bases being loaded. All three runners would score on a Ziegler walk, a Johnson groundout and a Baldwin sacrifice fly. Johnson hit a sharp grounder to second that Taylor had trouble handling so he had settle for the out at first instead of beginning a potential inning-ending double play.

Vancouver got their first two runners on when Pruitt and Obeso got their second hits of the night to put runners on the corners with nobody out. Warmoth struck out but Bahr committed a balk to score Pruitt and advance Obeso to second. Clemens walked and Adams singled to load the bases but Jacob hit into a 4-3 double play to squelch that rally.

Warmoth was charged with his second error in the fourth inning to allow Geraldo to reach but Nunez still faced the minimum when Warmoth started a 6-4-3 twin-killing off the bat of Medrano. The home half of the inning saw Lizardo single with two outs in the fourth but Pruitt was denied his third base hit of the game when he drilled one right at Garcia at short. 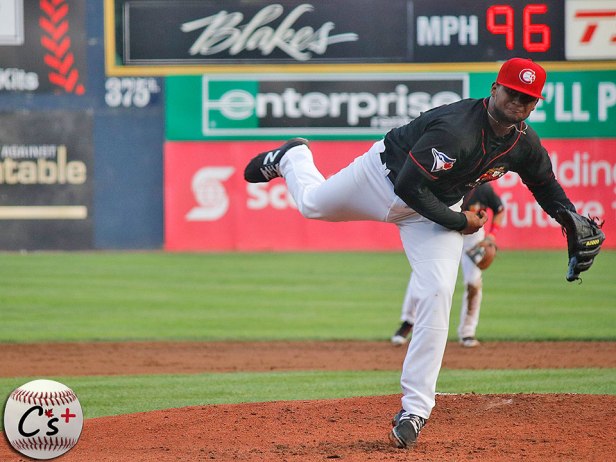 Juan Nunez battled his way through 5-1/3 innings against Salem-Keizer, allowing two earned runs but falling to 2-6 on the season.

Nunez neutralized a two-out single by Ziegler by needing just 11 pitches to set down Salem-Keizer in the fifth. The C’s had Bahr on the ropes again when Obeso led off with a walk and Warmoth got aboard by taking one for the team. Bahr would rebound by getting Clemens looking at strike three, retiring Adams on a fly to right that moved Obeso to third and striking out Jacob.

The next indication it was not going to be Vancouver’s night came in the sixth when Baldwin singled, stole second, moved to third on an Adams throwing error and scored on a fielding miscue by Pruitt in center. Nunez struck out Kirby before turning the ball over to Jake Fishman. He walked his first batter in Garcia but Adams found the range again at second by nailing Garcia on a stolen base attempt to help Fishman avoid any further trouble. 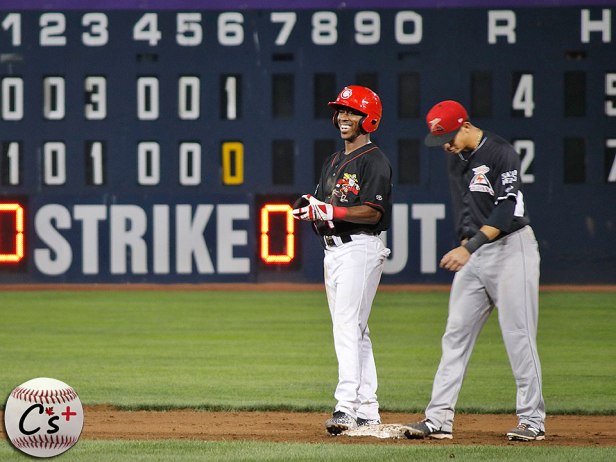 The C’s came knocking again against reliever Alejandro De La Rosa when Taylor hit a ground ball up the middle that looked like it was going to get through but the shortstop Geraldo got to the ball. However, Taylor beat it out and advanced to second when Geraldo’s threw sailed wide of first. Taylor showed off his speed again when he made it to third on a wild pitch that did not bounce that far away from the catcher Calabrese. However, the C’s could not make contact as Brock Lundquist and Lizardo struck out. Pruitt did put the ball in play but was robbed of an infield hit when Geraldo made a strong throw to just get Pruitt on a bang-bang play.

The Volcanoes added two more runs in the seventh when Ziegler took Fishman deep to left for a two-run homer that scored a Calabrese base hit. Salem-Keizer decided to work on their short game with a pair of bunts. Lizardo made a nice play at third to get Johnson but Baldwin laid one down to get aboard. Fishman would get Kirby on a groundout to send the game to the seventh-inning stretch.

Clemens and Adams came up with two-out singles and Jacob reached base when Matheny botched a routine grounder at third to load the bases. Taylor hit one right on the screws but it was right at Ziegler in center field for the third out.

Orlando Pascual put aside a Medrano single in relief of Fishman to begin the eighth. Lundquist started the bottom half of the inning with a double against Tyler Schimpf  and eventually got to third on a wild pitch. It didn’t matter as Lizardo, Pruitt and Obeso all went down swinging.

Pascual had problems in the ninth when he got into a bases-loaded situation with nobody out after a Mattheny single, a Johnson bunt single and a Ziegler hit by pitch in between. Pascual would get out of it thanks in large part to a 3-2 double play started by Jacob to get Matheny at home.

Schimpf would sit down Warmoth and his former Texas Longhorn teammate Clemens on strikeouts before an Adams base hit. Though Adams got to second on a balk, Jacob capped off a tough night at the plate by flying out to center to result in a 0-for-5 performance that included 10 runners left on base during his watch.

A couple of transactions involving the C’s were announced Friday. Righthander Bobby Eveld is leaving Vancouver to join the Gulf Coast League Blue Jays. Eveld’s last appearance came August 9 in which he recorded the win with two scoreless innings of relief against Tri-City. He won both of his decisions but had an earned run average of 11.17 with a 13-7 strikeout-walk ratio over 19-1/3 innings.

2012 C’s outfielder D.J. Davis continues to turn his season around in Dunedin.

Good 👁️! Blue Jays 2B Cavan Biggio has a .350 on-base percentage this year thanks to a league-leading 61 walks! pic.twitter.com/mOcUjhkFs4

Getting Rowdy, in Toledo… pic.twitter.com/cAMVmwBMF6 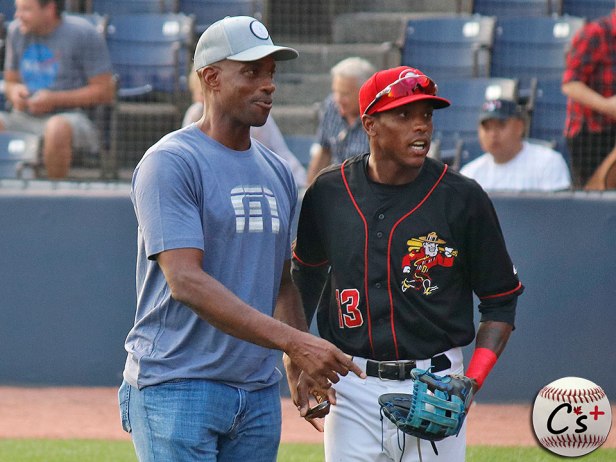 Fred McGriff was in town Friday to sign autographs for the fans. C’s broadcaster Rob Fai had a chance to speak to the former Jays slugger during the pre-game show. He also caught up with Reggie Pruitt and Logan Warmoth in the above link.

The C’s continue their series against Salem-Keizer Saturday night. The game will be carried on Shaw TV in Vancouver as well as TSN 1040 and CanadiansBaseball.com. First pitch is at 7:05 pm and Dalton Rodriguez is slated to be the man to throw it. The press notes and the team website say Nate Pearson, Donnie Sellers and Jose Espada will start the other three games for the C’s against Salem-Keizer. Sunday’s game is at 1:05 pm while Monday’s and Tuesday’s contests are at 7:05 pm.