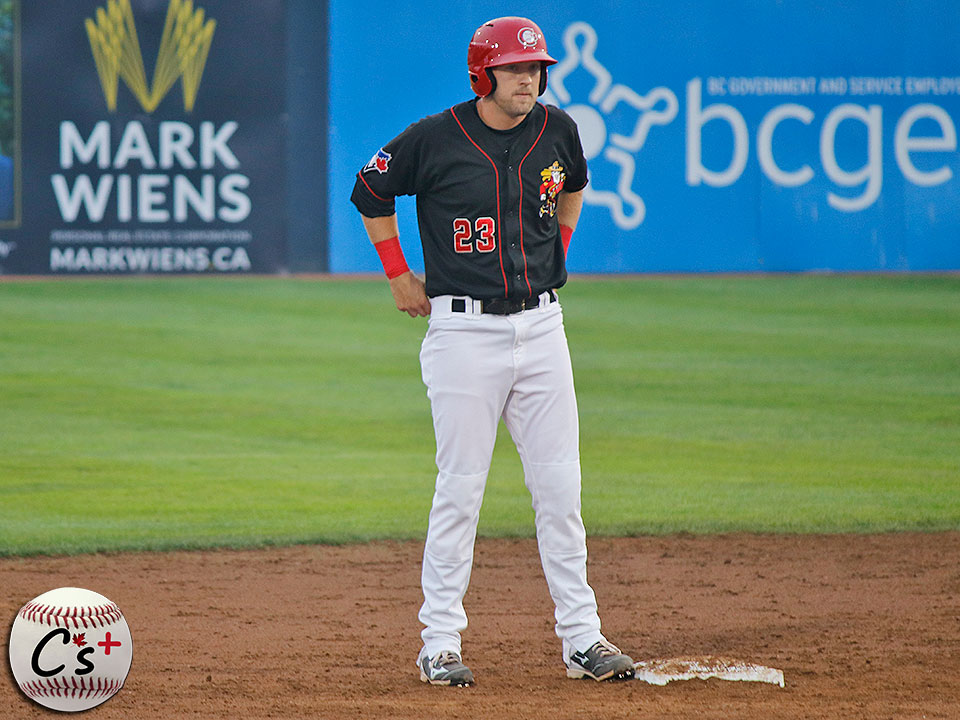 Justin Dillon was the first pitcher of the day for Vancouver and he set the tone early by getting Tyler Benson to ground out to short before striking out Justin Lopez looking and Kelvin Melean swinging.

Kevin Vicuna was the first baserunner of the day when he was hit by a Will Stillman pitch with one out but Logan Warmoth grounded out into a 5-4-3 double play in the bottom of the first.

After 11 pitches in the first inning, Dillon struck out Tre Carter to begin the second before allowing a base hit to Luis Almanzar. Dillon responded to that setback by striking out the side with Bryant Aragon and Jalen Washington failing to make contact.

The C’s then opened a big can of whoop-ass in their half of the second inning. Here’s what happened.

Vancouver sent 14 men to the plate in the second with six singles, a double, a home run, two walks and a hit by pitch.

Zach Logue—to the left of #39 Colton Laws—had a double-digit lead to work with in the third inning.

Zach Logue was the beneficiary of a 10-run cushion and he did not give the Dust Devils any momentum to build on in the third with a 1-2-3 frame, striking out Benson. Pruitt got a single and Warmoth took one for the team but the C’s were kept off the board in their half of the third.

Logue allowed his first baserunner with a leadoff walk to Lopez in the fourth but he got Melean to ground into a 4-6-3 twin-killing before getting Carter to strike out swinging. Jacob got on base with a walk against Chasen Ford but that was it for the C’s in the home half of the fourth.

Another leadoff runner got aboard in the fifth against Logue when Almanzar singled but Logue sandwiched a Washington strikeout with a pair of flyouts to turn away the Dust Devils. The visitors responded by sending away the C’s in order for the first time in the game.

Chris Hall came out for the sixth and had trouble finding the strike zone by walking Josh Magee and Benson before a Melean single loaded the bases with one out. Hall was able to bear down and strike out Carter and Almanzar swinging to leave the bases full.

Logan Warmoth doubled, walked and was hit by a pitch Thursday.

Warmoth opened the sixth with a double against Wilmer Torres and went to third on a Clemens single. He would tag up and score on an Adams sacrifice fly to make it 11-COB Vancouver. Jacob singled to reach base for a fourth straight time but a Lundquist double play ball prevented any further scoring.

The C’s replaced Warmoth at short with Vicuna and brought in Deiferson Barreto to handle second in Vicuna’s place in the seventh. The new pitcher was Grayson Huffman and he used his defence to convert a fly ball, a pop-up and a groundout into a three-up, three-down inning.

The Dust Devils brought in a new hurler in the form of Brendan Rogers and he also retired the side in order, getting pinch-hitter Brandon Polizzi for an inning-ending groundout. Polizzi remained in the game as he took for Pruitt in center field and got to watch Huffman work around a one-out walk to Benson with three outs on the infield.

Vancouver made a late attempt for a dozen runs when Clemens reached first on a strikeout/wild pitch with two outs.  A walk by Adams and another base hit by Jacob against Trevor Megill loaded the bases but Lundquist was rung up to end the threat.

William Ouellette got some work in the ninth and began the inning by handing Carter a golden sombrero. He struck out pinch-hitter Felipe Blanco before retiring Aragon on a grounder to second to wrap things up.

The C’s had 20 men reach base on 13 hits, four walks and three hit by pitches. Jacob led the way with a homer, three singles and a walk. Adams had a hit and two walks while Warmoth also reached base three times with a hit, a walk and a plunk. Pruitt and Clemens had the other multi-hit games with two apiece. Vancouver was 8-for-14 with runners in scoring position with eight men left on base.

Dillon struck out five over two scoreless frames of one-hit ball. Logue got the victory to boost his record to 2-1 with three shutout frames in which he allowed one hit and one walk while whiffing three. Hall put up a zero in the sixth despite a hit and two walks with a pair of K’s. Huffman walked just one over two shutout innings and Ouellette had a perfect ninth in the non-save situation. The pitching staff gave up just three hits and four walks while getting 12 strikeouts.

The Northwest League transactions page has Samad Taylor getting promoted to Vancouver from Bluefield. The 19 year-old second baseman was part of the trade the Toronto Blue Jays made that sent reliever Joe Smith to Cleveland. Taylor batted .250 in 16 at-bats with the Bluef-Jays with three walks, three runs batted in and a stolen base. Clutchlings has this rundown on Taylor.

2016 Jays first rounder and C’s righthander T.J. Zeuch is back with the D-Jays and was set to pitch Thursday before the game was postponed due to rain.

2015 Jays first rounder and C’s righty Jon Harris went six innings and Andrew Case (2014-2015) got the save as New Hampshire outlasted Akron. 2014 C’s shortstop Richard Urena was a triple shy of the cycle while 2014 teammate Jonathan Davis also had a three-hit night.

2014 C’s slugger Rowdy Tellez had a perfect night at the dish for the Buffalo Bisons.

#BlueJays No. 13 prospect Rowdy Tellez goes 3-for-3 with a double, three RBIs and two walks for @BuffaloBisons. https://t.co/rGOxuN44TA pic.twitter.com/PTqRuWhpGZ

Some bad news for 2012 C’s hurler Taylor Cole after his major league debut.

The Salem-Keizer Volcanoes make their first visit to Vancouver Friday to begin a five-game series. All games are at 7:05 pm except for Sunday which is a 1:05 pm first pitch.

The C’s are now 8-7 in the second half and are 29-24 overall in the North Division.They are in a three-way tie for second with Tri-City and Everett with all three teams just one game behind Spokane.