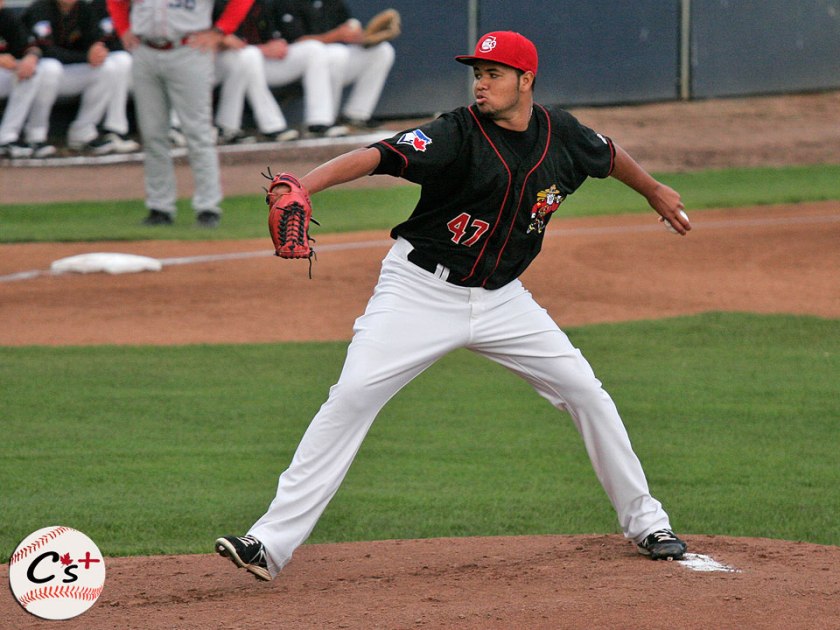 Jairo Labourt made his major league debut with the Detroit Tigers in 2017.

A couple of 2014 Vancouver Canadians were back together again briefly. 2013-2014 C’s left-hander Jairo Labourt and shortstop Franklin Barreto were reunited when the Oakland Athletics claimed Labourt earlier this spring but Labourt returned to the Detroit Tigers on a minor league deal after being claimed by not just the A’s but the Cincinnati Reds as well this off-season. The 6-foot-4 lefthander from the Dominican Republic was designated for assignment by Detroit in late February after signing former Blue Jays lefty Francisco Liriano to a one-year contract.

Labourt—who joined fellow lefty and 2012 C’s hurler Daniel Norris in Detroit as part of  the David Price deal in 2015—made his major league debut with the Tigers against the Cleveland Indians at Comerica Park September 1. He overcame a leadoff single by Abraham Almonte to pitch a shutout eighth inning.

Labourt made six one-inning appearances, four of the shutout variety that included this effort against the Kansas City Royals September 6. He finished his stint in Detroit with a 4.50 earned run average and walked seven batters while whiffing four. FanGraphs says Labourt leaned a lot on his slider almost 63 percent of the time while using his fastball over 31 percent of the time and a changeup at a nearly six percent rate. He was averaging 93 miles per hour with the fastball while his slider around 84 and a changeup near 87.

It was a meteoric rise for Labourt as he began 2017 with the High-A Lakeland Flying Tigers before earning promotions to the Double-A Erie SeaWolves and the Triple-A Toledo Mud Hens. He earned an All-Star berth in the Eastern League and made his second Futures Game appearance, two years after representing the Blue Jays in the top prospects contest. Labourt—who just turned 24 on March 8—put together a composite record of 1-1 with a 2.17 ERA and a 79-33 strikeout-walk total in 66-1/3 innings.

Franklin Barreto in action for the Oakland A’s at Safeco Field September 3, 2017.

Labourt’s 2014 C’s teammate—shortstop Franklin Barreto—made a strong push to be with the Oakland A’s on Opening Day but will open 2018 with the Triple-A Nashville Sounds despite slashing .293/.344/.534 with three home runs, two triples and a double while stealing three bases in three attempts. The 5-foot-10 right-handed hitter did strike out 18 times in 58 at-bats so perhaps the A’s brass want to see Barreto make a bit more contact before calling up him again. He also had to compete for playing time in a crowded middle infield featuring Marcus Semien and Jed Lowrie.

Barreto—who homered in his major league debut on the road against the Chicago White Sox June 24—batted .197 with a .602 OPS during his two stints with the A’s in 2017. Still, Baseball America rated the Caracas, Venezuela native the 43rd best prospect in the game and he just turned 22 back on February 27. One scout likened him to Houston Astros second baseman Jose Altuve. It appears it will be sooner rather than later that Barreto will make his mark with Oakland in 2018.

According to FutureBlueJays.com, 2016-2017 C’s lefty Grayson Huffman will miss 2018 with Tommy John surgery while 2016 righty Justin Maese is sidelined with a shoulder injury.

Blue Jays prospect Grayson Huffman will be undergoing Tommy John surgery. He joins Elizier Medrano, who had it this off-season, and Justin Maese, who underwent a shoulder impingement procedure earlier this month.

2013 C’s lefty Matt Dermody was designated for assignment by the Blue Jays but he has now been outrighted to Triple-A Buffalo along with 2012 Canadians outfielder turned pitcher Carlos Ramirez.

Nicolino deserves better after having to endure the indignity of being a New Orleans Baby Cake last season.

A great story by the Canadian Baseball Network on 2016-2017 C’s utilityman Mattingly Romanin. In another classless move by the Jays brass this off-season, the Burlington, Ontario native was let go before the ring ceremony in Dunedin to honour the Northwest League champion C’s.

2017 C’s righthander Nate Pearson will be making his full-season debut in Dunedin instead of Lansing.

Instead of sending Nate Pearson to the Midwest League to begin the season, the Blue Jays are jumping their talented righthander to the high Class A Dunedin to begin his first full season of pro ball. https://t.co/gPsWhtgWsW pic.twitter.com/P1638tk81j

Finally, a reminder that the 2018 Toronto Blue Jays Minor League Handbook from Jay Blue is now available with 2014 C’s outfielder Roemon Fields on the cover.

My thanks to Jay Blue for asking me to contribute to this year’s handbook by participating in a Q&A session about the C’s 2017 season.

This handbook is an excellent resource by providing detailed information on all the players and teams in the Blue Jays system. It’s a must-have for any diehard fan.

Vladimir Guerrero Jr. is all the rage in Blue Jays land for his walk-off home run in the pre-season finale against the St. Louis Cardinals at Olympic Stadium in Montreal Tuesday.

That dinger stirred up a lot of reaction in the Twitter-verse from those connected with the Vancouver Canadians.

Goosebumps, man. The future is bright in this org! https://t.co/f5s2YIcq1l

There were only a few guys I ever played with/against that were so talented that it made me question why I even try playing baseball, here is one of them. It’s gonna be fun watching this kid https://t.co/AsvsaYzMyT

What a moment for the superstar!! Everyone who’s played with this kid knows what a special talent he is! But you can’t make this stuff up! Wow! https://t.co/JD6czoX9Gc

@TimmyLo11 remember that time you and I got traded for part of his signing bonus? https://t.co/PWjIWH9Zfl

Getting to know Vladdy the past 2 years, the hype is real. He’s legit, a class act and has an unbelievable future ahead of him. https://t.co/9zeM5UG1sA

He would be a freshman in college…. 🙄 https://t.co/53ewukPkHy

With a name like Fields, no wonder he can track fly balls like this down with ease…

Solid night from the former ‘Cat and Seattle native! https://t.co/Kg5rb1dMjT

With a name like Fields, no wonder he can track fly balls like this down with ease…

Solid night from the former ‘Cat and Seattle native! https://t.co/Kg5rb1dMjT

A total of 16 players with C’s connections took part in the two-game exhibition series in Montreal.

Congratulations to my college buddy @Conor_Fisk34 on getting his big break with the @BlueJays in the upcoming Montreal Exhibition! #SMTTT #hardworkpaysoff #nevergiveup @SouthernMissBSB @USMGoldenEagles pic.twitter.com/7x65MbVDAM

The 2017 C’s and Dunedin Blue Jays were given their championship rings.

You never forget your first. pic.twitter.com/Cyl7vUxiR3

The 2017 @FloridaStateLg Co-Champs received their championships rings this morning!

Congratulations to an incredible group for an unforgettable season! pic.twitter.com/lMooonK4aQ

Couldn’t be more blessed and honored to win another ring! Mom Dad this is another one for you… https://t.co/wyzfuID7P5

Here’s the rest of the best.

Spoke with @RileyAdams on what makes catchers tick, how he’s been compared to Kris Bryant, and even gave a scouting report on Nate Pearson. https://t.co/bxtIjvVIB1

Observation 2 – I think Graham Spraker may well be slotted for a relief role once he’s healthy (he had just started throwing in the bullpen when I was down there). He could flip flop with Maverik Buffo who might start.

My guess at how the system assignments will go for the Jays to open the year throughout full season ball: https://t.co/qGQ4HbQ1vx

Awesome surprise at my locker this morning! Thanks @LumberlendCo for this cool #BatMug and for putting my life verse on it. I love it! pic.twitter.com/wKwwlDdvw1

It’s so hard to look up when you look down, just smile, take the positives out of everything in this world no matter the situation because I promise you there will always be one 😌

A lot of laundry. pic.twitter.com/yVHJxvJQ2D

BLUE JAYS: Roberto Osuna getting an inning of work over at Blue Jays Minor League complex. Vladdy and Bo getting some work in as well… pic.twitter.com/zSD9jT18G2

BLUE JAYS: Nate Pearson smiles as he watches Vladdy Jr. round the bases after a 1st inning home run that was a tall, towering drive into a stiff wind. Vladdy says he was sitting FB and if he had gotten three sliders he would have struck out. Pearson dominant after that, big time.

“You sure about that blue?” @ Scotiabank Field at Nat Bailey Stadium https://t.co/D2HPWa0jRs

Stro jumping the gun, but this pair may force the timetable. https://t.co/Nh4iflBZT6

Marcus Stroman wants Bo Bichette & Vlad Guerrero Jr. in the majors right now, so John Gibbons jokes… “Did he talk to Donaldson and those guys about that yet?” #BlueJays

Blood-lines. The young ones got game. Future is bright. Love being out there today with them! @BlueJays @19boknows @doinitBIGgio23 #VladyJR

New to @BaseballTOR: Kacy Clemens on the weight of a last name, and the transition these #BlueJays legacy prospects have made:https://t.co/ZgfSx1FQ7Y pic.twitter.com/aR2T16UXAA

A great old-school ballpark, Nat Bailey Stadium has been home to pro baseball in Vancouver (BC) since 1951, most recently the @vancanadians of the Northwest League. So cool to find a gem like this in a big city. https://t.co/kd0N6XaoaT #vancouverbc #vancouvercanadians pic.twitter.com/pjSynMRsLA

Jonathan Davis shows some oppo power with a HR to the berm.

Great AB by Christain Williams. Got a first pitch FB, smacked it off the Pitcher, and just beat the throw at 1B.

TFW you go OPPO TACO for the big club!