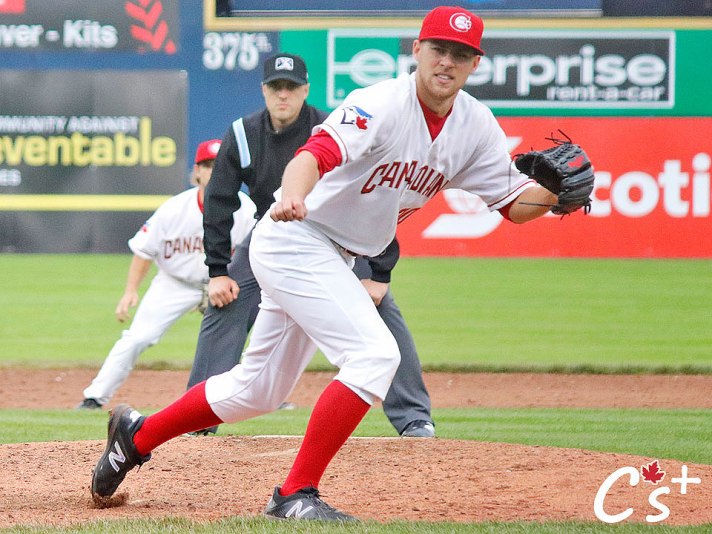 The Vancouver Canadians snatched defeat from the jaws of victory as they fell to the Boise Hawks 6-5 at Boise Memorial Stadium Wednesday night. They were victimized by a walk-off grand slam in the bottom of the ninth. The C’s find themselves in a three-way tie again for first place in the Northwest League North Division at 13-13 with Tri-City losing in Hillsboro and Everett winning at home against Salem-Keizer.

Griffin Conine (left) and Yorman Rodriguez (center) teamed up to produce the first run of the game for Vancouver Wednesday. Shortstop Vinny Capra is on the right.

Vancouver picked up a run in its first at-bat with a two-out rally. The inning had a promising beginning when Otto Lopez singled but was caught stealing at second before Vinny Capra flied out to right. Yorman Rodriguez kept the inning with a two-out double to center off Boise starter Pearson McMahan before coming home on a Griffin Conine double to the middle patch out of the outfield.

The Hawks quickly responded with the tying run in the bottom of the first when Matt Hearn reached on a throwing error by Capra at short. Hearn proceeded to steal second before Terrin Vavra drove home with a single up the middle off Josh Winckowski.

There was no scoring until the top of the fifth when McGregory Contreras singled to left but made it all the way to third on a throwing error by Hawks left field Luke Morgan. After Jesus Severino walked, a run-scoring single to left by Tanner Kirwer scored Contreras. An RBI knock to center by Lopez brought home Severino to chase McMahan from the game. Shelby Lackey got Boise out of the inning without any more damage.

Boise would get one back in their half of the fifth with a two-out rally when Daniel Jipping and Hearn singled before a double by Vavra. Jipping came in to score but Hearn was cut down at the plate on a 9-4-2 play from Conine, Lopez and Rodriguez to maintain the C’s lead.

The Canadians would increase their lead again with another two-out uprising in the seventh. Kirwer doubled to left off Mike Bunal and came in to score on a Lopez base hit to center. Lopez tried to score after Capra reached base on an error by Boise rightfielder Cade Harris but Harris threw out Lopez at the plate to end the inning.

Vancouver added one more run in the eighth when Hawks lefthander Hunter Williams plunked Rodriguez with a pitch. Rodriguez had to leave the game and was replaced on the basepaths by Brandon Polizzi. A Sterling Guzman single advanced Polizzi to third before scoring on a Jake Brodt sacrifice fly to right. However, Guzman ran into an out at second to end the rally on a 9-1-4 play.

After Denis Diaz and Fitz Stadler worked a shutout seventh and eighth innings respectively, Justin Watts got the ball in the ninth for the C’s. Willie MacIver greeted Watts with a base hit to left and walked Jipping after striking out Harris. Will McAffer took over on the mound and he proceeded to load the bases on a Hearn single up the middle before they were unloaded on Vavra’s grand slam over the center field wall. Lefthander P.J. Poulin got the win for Boise after working a perfect ninth.

Otto Lopez had a perfect night at the plate by going 4-for-4 with two RBI Wednesday.

The C’s had more chances to score in this one.

Lopez had four hits while Contreras and Kirwer had two apiece. Rodriguez was on base twice with a double and a hit by pitch before leaving the game. Vancouver was 4-for-8 with runners in scoring position and left four men stranded.

Winckowski was in line for the victory after giving up just one earned run on six hits over six frames. He struck out three, walked nobody and got 10 outs on the ground.

Diaz gave up one hit in a scoreless seventh and Stadler’s Northwest League debut saw work around a hit by pitch and an error by Jesus Severino at third for a shutout eighth. Stadler pitched to Brett Wright to replace Rodriguez behind the plate after Rodriguez was injured.

Congratulations to 2014 C’s outfielder Jonathan Davis as he is now one step away from getting to the big leagues. He was promoted from New Hampshire to Buffalo after playing in the Eastern League All-Star Game. The 26 year-old posted an OPS of .829 with 30 extra-base hits and 19 stolen bases with the Fisher Cats this season. The native of Camden, Arizona was Toronto’s 15th round pick out of Central Arkansas in 2013.

A much deserved promotion for Davis. I’m glad he got to play in the Eastern League All-Star game first! https://t.co/D7DYMXeRuN

Jonathan Davis is on his way to Triple-A! 🤩

A HUGE congratulations from all of us in New Hampshire to a fan favorite, a community service award-winner, and a phenomenal person and player. Say hi to all our old pals in Buffalo for us! pic.twitter.com/gV1nsrtVmZ

.@rjpruitt08 works an eight-pitch at-bat, finished with an oppo single, and then steals 2nd, steals 3rd, and scores on a throwing error by catcher Olmeda! The man is QUICK. #OneManRally

Not even wet weather was able to dampen spirits at the 2018 edition of Dog Day of Summer at Nat Bailey Stadium! Here are 37 adorable photos of dogs watching baseball😍🐶 @vancanadians https://t.co/DT0DxFWpLw pic.twitter.com/PlRmuCWgbq

At tomorrow’s Dunedin Orange Jersey Night, we’ll be raffling off a brand new Orange Jersey at Customer Service! Come out for your chance to win!

He chats with @Diamond_Dante prior to today’s game about his improvements this season!

JASON LEBLEBIJIAN gets the IL on the board again with an RBI single in the bottom of the 5th.

Jason Leblebijian draws a TEN-pitch walk to lead off the bot. of the 2nd.

Turn on @ESPN1520 NOW to catch the @TripleABaseball All-Star Game between the IL and the PCL featuring starting 3B Jason Leblebijian and C Danny Jansen! #Bisons #BlueJays pic.twitter.com/yR5yJAlkEb

You think Alex Ovechkin celebrated accordingly after winning the Stanley Cup? Imagine what the country of England will do if they win the World Cup!! 🍻🍻

RT to Enter to Win 4 tickets to July 23 where the Canadians will be wearing these throwback jerseys! #AtTheNat

Proposition for the second half of the season: make “Where in the world is Tim Mayza?” a drinking game. On a player who has spent nearly as much time with #BlueJays as he has in Triple A. https://t.co/zvSaAqU7ml

Patrick Murphy has raised his stock as much as any Pitcher in the system. He’s added velo, and stays 96-98 deep into games. Great curve, just needs to develop a more effective 3rd pitch.

Stroman needs to play every day and be another Ohtani.

🐾⚾️👏 We would like to give a round of appaws to all those that joined us last night at our Dog Day of Summer presented by @petcurean! #AtTheNat pic.twitter.com/fh37AVVUsR

.@VanCanadians hoping long ball can bring playoff baseball back to the Nat https://t.co/kGkgsfmV38