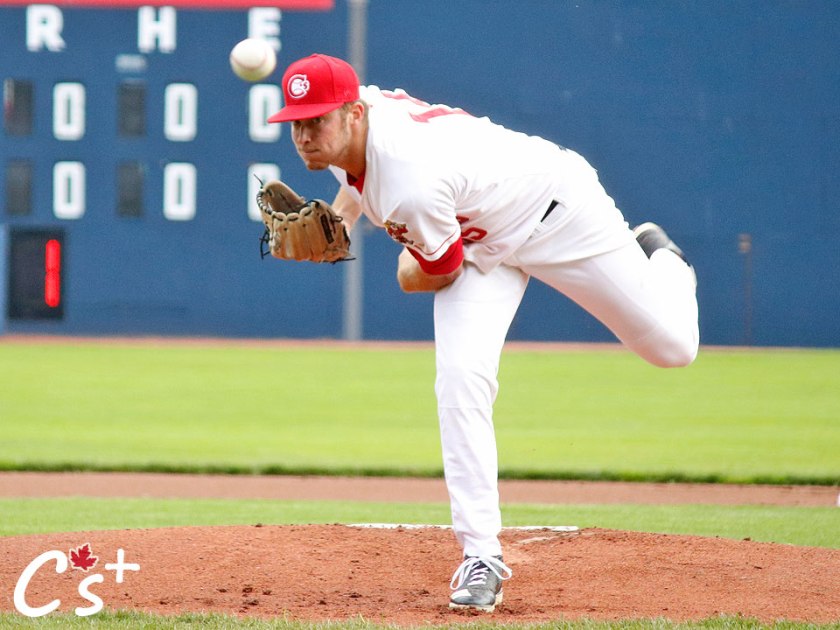 The latest C’s Chat is with former 2018 Vancouver Canadians pitcher Jordan Barrett. The 23 year-old lefthander was recently promoted to the Lansing Lugnuts of the Midwest League after going 2-0 with a 3.48 earned run average in four starts with the C’s. At the time of his call-up, Barrett led the Northwest League with 28 strikeouts over 20-2/3 innings.

An 18th round selection of the Toronto Blue Jays out of Elon University in 2017, Barrett teamed up with George Kirby to throw the first no-hitter in CAA Tournament history against the College of Charleston. Unfortunately for Barrett, Elon lost the game 1-0 and that was the end of their season.

Barrett began his pro career with the Bluefield Blue Jays where he won three out of five decisions with a 2.70 ERA, posting a 46-13 strikeout/walk total over 35 innings. The Margate, Florida native also collected a four-inning save and struck out eight against the Danville Braves August 10. He split time between the starting rotation and bullpen as six of his 11 outings came in relief.

It was during the team’s media day last month when I chatted with the 6-foot-4 southpaw and he shared his thoughts about his first season of pro ball in the Appalachian League.

“It was my first season. I thought it went well. It was kind of different being able to piggyback with guys being on an innings limit but overall it was a good year. We had a really good team. Overall it went really well.”

Barrett helped Bluefield reach the post-season where they went up against the Pulaski Yankees. The Bluef-Jays won the opener in Pulaski but could not get a win in the next two games at home despite 2-1/3 scoreless innings from Barrett in the deciding Game 3.

“The playoff atmosphere was pretty cool. I knew it was going to be good. It was against Pulaski, the Yankees affiliate, and they kind of had our number all year. When we took the first game, we thought we had them and then the next two games, we came up short.”

When it came to his favourite moment of 2017, he pointed to his final regular season start on the road against the Johnson City Cardinals August 29.

“The whole season was just a memory. I’d say my best game was against Johnson City. I went five innings and (gave up) one hit. That was probably my best outing. Honestly the whole year was a great memory.”

Jordan Barrett earned his first win in a Vancouver uniform June 23 in Spokane.

Barrett was happy just to be in professional baseball because he was not certain if he would be drafted.

“It wasn’t like a ‘for sure’ thing. I was a senior sign so I was just kind of waiting and praying that someone would pick me up and it ended up being the Blue Jays. I thought it was awesome. I had a previous teammate in college, (2017 C’s reliever) Chris Hall, who I played with so it was cool that we were going to the same organization. He kind of told me it was a great organization to be with. He said a lot of good things and I knew right away it would be a good fit.”

Barrett felt he learned a lot about pitching in his first taste of pro ball.

“I learned more in-depth about pitching really. A lot more about myself as far as routines, how to pitch to certain guys, how to sequence certain pitches. That was the biggest thing for me I would say as far as the development process.”

“He was awesome to work with. He was a great dude. He really didn’t try to change much. He knew it was really everyone’s kind of first year with the new guys at least so he kind of just guided you. He was the one that kind of taught me as far as the development stage as far as sequencing pitches, like reading hitters, stuff like that. He helped me out a lot.”

Jordan Barrett warms up in the bullpen before his June 29 start against the Salem-Keizer Volcanoes.

When he is on the mound, Barrett lists four pitches in his arsenal.

Calling his fastball his go-to pitch, Barrett says his breaking pitches are a close second.

The changeup was the focus for Barrett during the off-season.

“Definitely changeup development. Over spring training and extended, it went really well. I just hope I keep that up and bring it into the season.”

Jordan Barrett loosens up in the outfield before his June 29 start against Salem-Keizer.

Other than a quick introduction to Double-A ball with the New Hampshire Fisher Cats against the Hartford Yard Goats May 26 in which he pitched 3-1/3 innings of one-run ball, Barrett was raring to go with the C’s.

“I’m expecting a good year. We got a great group of guys. We all get together. We all get along pretty well. I think we’re all excited to be here. Honestly we’ve been waiting a long time to start a season so I’m looking forward to it.

I haven’t heard any bad things, that’s for sure. I’ve heard Vancouver’s an awesome place. The stadium’s going to be great. A lot of fans, a lot of energy so I’m looking forward to it.”

Barrett got to experience what it was like to pitch at Nat Bailey Stadium with his only home appearance on June 29 in which he finished one strike shy of a victory against the Salem-Keizer Volcanoes. He struck out eight and walked five as he gave up just one run in 4-2/3 innings in an eventual Vancouver victory.

Jordan Barrett notched his second win in Everett July 5 just days before his call-up to Lansing.

My thanks to Jordan Barrett for taking part in this episode of C’s Chat. You can follow him on Twitter @JordanBarrett21.