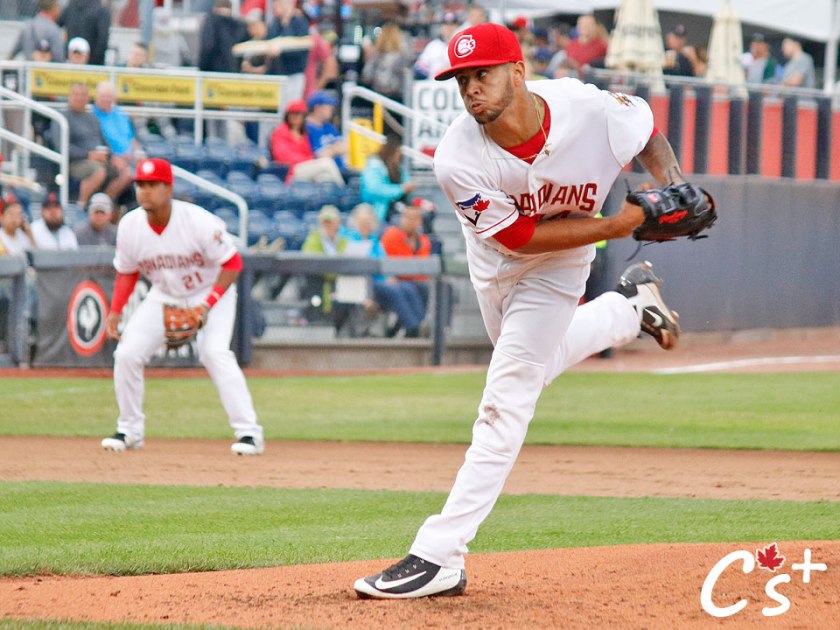 The Vancouver Canadians finished off the Spokane Indians in a rain-shortened series finale at Nat Bailey Stadium Monday. The C’s completed a three-game sweep with a 3-0 victory over Spokane to move over the .500 mark for the first time this season. Vancouver is now tied with Tri-City at 13-12 for top spot in the Northwest League North Division with Everett one game behind. 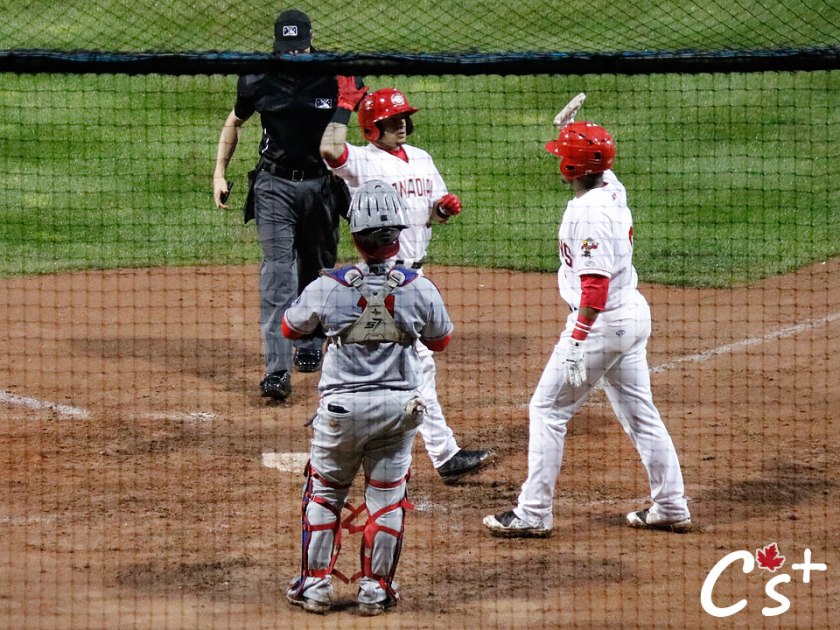 There was no scoring until the bottom of the fifth. Spokane reliever Chandler Sanburn entered the game with one out in the frame and walked the first batter he faced in Bryan Lizardo. The C’s third baseman wore out Sanburn with a nine-pitch at-bat. Sanburn’s 10th pitch wound up over the fence in left field as Christopher Bec‘s drive remained just fair down the left field line to give Vancouver a 2-0 lead. 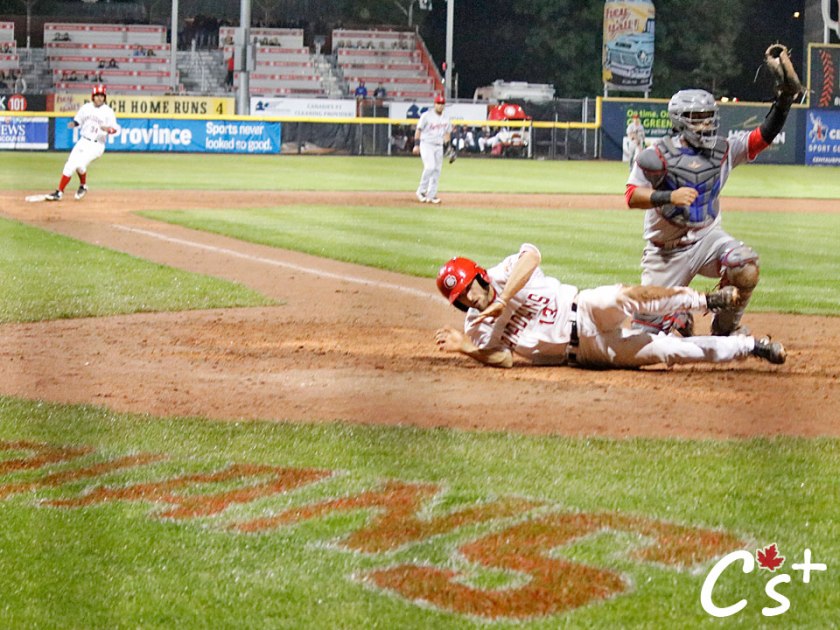 Vancouver tacked on one more run in the sixth when Vinny Capra worked a leadoff walk against Sanburn. Sean Chandler entered the game in relief for Spokane and gave up a Yorman Rodriguez single to left. Capra had to be sure the ball dropped in front of left field Austin O’Banion and raced to second to avoid being doubled off. Chandler uncorked a wild pitch to move both runners up a base. Capra was able to beat the throw to home from Spokane second baseman Jonah McReynolds on a ball hit by Conine who reached on a fielder’s choice. The rain was getting heavier at this point as Jake Brodt and Lizardo both struck out. Lizardo’s strikeout actually came just in time as the rain intensified just seconds after he went down swinging. The game ended with two out in the sixth with Conine and Rodriguez being rained on at the corners. 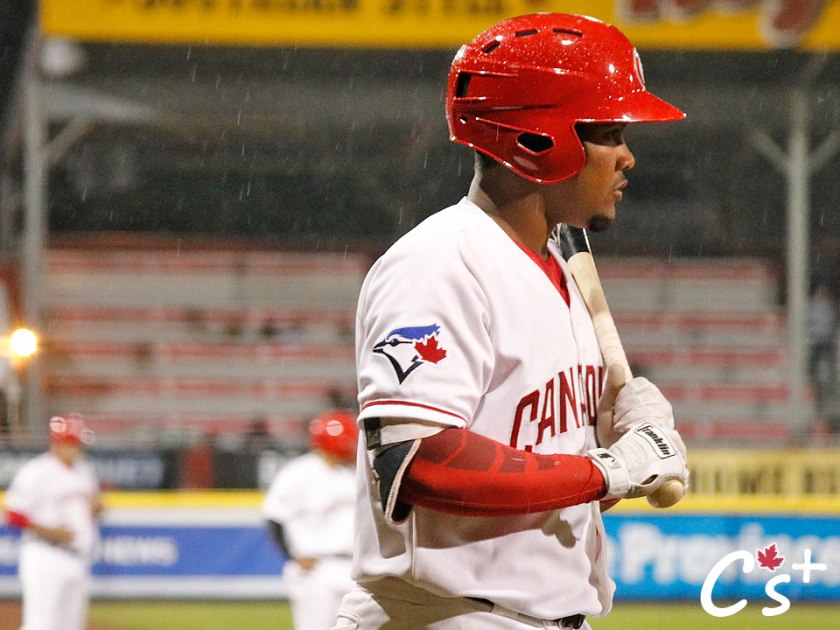 Bryan Lizardo drew a key walk and scored the first run of the game for Vancouver Monday.

Jose Espada enjoyed his best start of the season with five shutout innings of one-hit, one-walk ball for his first victory of the year. He struck out eight before turning things over to Juan Nunez in the sixth. Nunez worked a 1-2-3 frame and wound up with the save.

Nunez went up to 95 during the sixth. 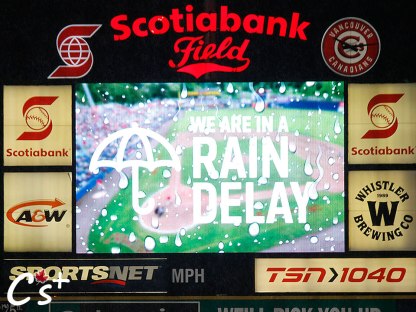 The game was plagued by rain after the two teams had to wait out a 42-minute rain delay that stopped the game in the bottom of the second. The two teams were pulled off the field after a 2-2 count to Conine to lead off the inning. Hans Crouse—the Texas Rangers’ number four prospect according to MLB.com—started the at-bat against Conine but it was Cole Uvila who took over after the rain stopped. Crouse was clocked as high as 97 miles per hour during his outing but the C’s hitters did not have an easy time of it against Uvila either. The Rangers 40th round pick in this year’s draft. Uvila was around 94-95 MPH and he dispatched Conine with his first pitch to strike him out swinging.

Uvila would plunk Tanner Kirwer in the forearm with a pitch in the third and he allowed Kirwer to steal second while hanging on to the ball. Uvila would get Otto Lopez to fly out to end that inning. He also overcame a Rodriguez walk with one out in the fourth when Rodriguez was thrown out stealing by catcher Isaias Quiroz. Uvila struck out Brodt to begin the fifth and that marked the end of his outing. That was a break for the C’s as they were able to break through with three runs against the next two relievers. Uvila pitched like somebody who should have been taken much higher than the 40th round. You can find out more about him right here.

Jose Espada only had two baserunners to contend with over five shutout innings Monday.

Espada needed just 62 pitches to get through five innings and he got some help from his teammates. Brandon Polizzi made a nice running catch in front of the 375 foot sign in left-center field to retire McReynolds on a deep fly ball. Kirwer also ran one down in deep center on a drive by O’Banion for the first out of the third. That turned out to be huge when Troy Dixon recorded Spokane’s lone hit with a triple to right. Espada stranded him by striking out Tanner Gardner.

Griffin Conine picked up his team-leading 14th run batted in for Vancouver Monday to make a contribution on ‘Canine Night’ at the park.

Conine had trouble with a fly ball to right to start the fourth inning from Tyler Depreta-Johnson but he was able to locate it in time by running back to make the catch in front of the warning track.

The C’s strong defence continued in the sixth when Nunez took over for Espada. Second baseman Otto Lopez ranged well to his left and spun 180 degrees before firing on-point to Brodt at first base to retire Dixon for the first out. Nunez then snared a comebacker on a 88 mile-per-hour offering off the bat of Gardner for the second out en-route to a 1-2-3 frame.

Tanner Kirwer reached base in both of his plate appearances Monday.

Vancouver had three hits and four walks in this one and that was enough to overcome seven strikeouts and a 0-for-4 performance with runners in scoring position. Capra,  Rodriguez and Kirwer were the on-base leaders with Capra drawing two walks, Rodriguez getting a single and a free pass and Kirwer picking up a single and a hit by pitch. Kirwer stole his 11th base of the year but Capra and Rodriguez were caught stealing to end the first and fourth innings respectively.

The C’s have the day off Tuesday. They will make the trek to Idaho for a five-game series against the Boise Hawks starting Wednesday. The road trip will wrap up with three games in Tri-City against the Dust Devils July 16-18. The first half will conclude July 19-23 when the C’s return home to take on the Hillsboro Hops.

Congratulations to lefthander Jordan Barrett for his promotion to the Lansing Lugnuts. He led the Northwest League with 28 strikeouts and posted the fifth-best earned run average at 3.48 to go along with a 2-0 record.

This edition of C-Tweets goes to the dogs as it was the Dog Day of Summer at Nat Bailey Stadium. It’s unfortunate the weather did not cooperate but these awesome canines stuck it out with another sellout crowd on hand. Great job by DJ Taylor Sincro for playing ‘Black Dog’ by Led Zeppelin and ‘You’re My Best Friend’ by Queen in between innings when the dogs were shown on the videoboard. You can follow him on Twitter @DJSincro.

First official look at the Dunedin Orange Jerseys we’ll wear this Thursday night! Get tickets to the game and bid on your favorite player’s game worn jersey here: https://t.co/5YZbm6oAnQ pic.twitter.com/iewV5S2q3U

Make sure to enter our Facebook contest for a chance to win 4 tickets and the opportunity to throw out the first pitch at the @vancanadians baseball game! https://t.co/cRiasnbIHD #salvationarmy #AtTheNat pic.twitter.com/Q53mC7PMtQ

The weather may be a bit ruff right now but the Dog Day of Summer is happening #AtTheNat pic.twitter.com/UhNmPzD95q

Baseball is less fun in the rain. pic.twitter.com/i5JGBRnDc9

Bruce hearts baseball @vancanadians game! Well the 2 innings before it poured rain and all the wet dogs bolted for the exit. Solid game! pic.twitter.com/BobJMKVlmK

When you try to take a picture with a bunch of dogs in the rain. Brief but fun time at the @vancanadians game pic.twitter.com/SD8JmATTP1

Looks like we might resume play shortly 😁 Amazing job by @RossBaron9 and the entire @vancanadians grounds crew 👏⚾ pic.twitter.com/WJwrw6RhFr

A #Dogs #POV at the #Nat waiting for the rain to pass @vancanadians #Baseball #WheresTheBall pic.twitter.com/dV0pymaf3t

@vancanadians @Petcurean waiting for the sun (or at least less rain) #AtTheNat pic.twitter.com/7Ombn76K3S

Monte seems very happy to be #AtTheNat for the @vancanadians game tonight. pic.twitter.com/0MfDCc6zJV

Just awaiting to see if the @vancanadians will be rained out this evening – Either way Stella has been enjoying meeting many new four legged friends and eating lots of pup corn (aka all the food that falls on the ground). 🐾 @CTVVancouver #baseball #thenat ⚾️ pic.twitter.com/iPspKWWG7z

.@VanCanadians hoping long ball can bring playoff baseball back to the Nat https://t.co/kGkgsfmV38

Hey! Tonight’s game was a complete game and your ticket would not be considered a rainout ticket.

ME AND MY BOY AT A BALLGAME ❤️ pic.twitter.com/Exqmgokd5K

In the bullpen cart with @vancanadians pitchers for an upcoming #AnnLuusInYourShoes segment! pic.twitter.com/6gSkkkjKFg

HEADS UP: The Triple-A All-Star Festivities in Columbus, OH begin TONIGHT with a ‘Skills Competition.’ You can watch #Bisons Danny Jansen & Jason Leblebijian compete with a free LIVE webstream! @BlueJays

Jonathan Davis is probably thinking: “can we be the Mountain Men every game?”

In the 8th inning alone, he stole the show with a web gem and a grand slam as part of yesterday’s 14-2 win. pic.twitter.com/21iVi5dOvT

Max Pentecost and the Mountain Men are ready to roll! pic.twitter.com/pt40KqszIt

Strive to have as much fun as the @LansingLugnuts.#MiLB pic.twitter.com/RMVgHig8ax

Hollywood why you had to do my teammate like that? 🤷🏽‍♂️ @chavezyoung242 https://t.co/FgSYRTw4yX

Thinking it should be a requirement for every team to have an honorary bat dog. https://t.co/FZirnIlstF