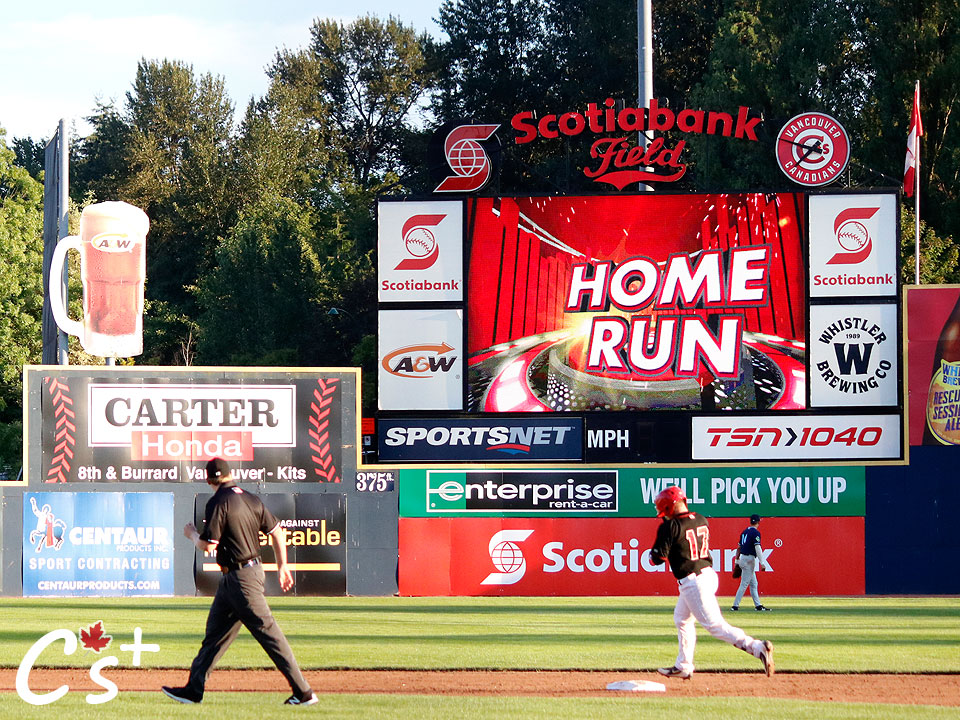 Brett Wright rounds second base after hitting his third home run of the season Saturday.

The Vancouver Canadians are mathematically alive in their quest for the first-half North Division title. The C’s overcame an early two-run deficit to down the Hillsboro Hops 3-2 at Nat Bailey Stadium Saturday night. Everett’s loss in Boise and Tri-City’s setback against Eugene were exactly what Vancouver needed as the C’s returned to the .500 mark at 18-18. The Canadians need to win the next two games against Hillsboro and the AquaSox to lose the next couple in Boise to win the North Division pennant for the season’s first half.

Hillsboro had the first run of the game in the second inning when C’s starter Jose Espada issued a leadoff walk to Jake McCarthy before hitting Dan Swain with a pitch. Zachary Jones grounded into a 4-6-3 double play but Espada threw one to the backstop to allow McCarthy to cross home plate. The Hops other run came on a long ball as Jose Caballeros took Espada deep to left field on a 3-1 pitch with two outs in the third.

Brett Wright points to the sky after stepping on home plate to complete his home run trot.

Ryan Weiss kept Vancouver off the board for the first two innings before lefthander Kenny Hernandez took over on the mound in the third. Hernandez was lit up by Brett Wright who crushed a 3-2 pitch onto the roof of the left field porch to make it a 2-1 ballgame. Vinny Capra kept the rally going with a one-out single to right field and made it to second on an Otto Lopez groundout to short on a hit-and-run. Yorman Rodriguez extended his hitting streak to 14 games with a double to center to score Capra with the tying run. 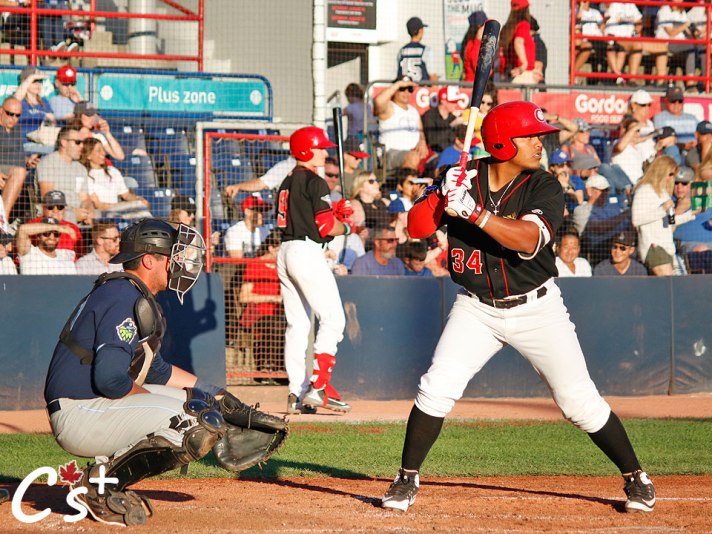 Yorman Rodriguez kept his hitting streak going with an RBI double in the third.

The game would stay tied until the eighth when Lopez led off with a double against Hops reliever Ethan Larrison. A passed ball by Swain pushed Lopez up another 90 feet before a one-out intentional walk to Griffin Conine. Bryan Lizardo hit a groundball to second that erased Conine but he beat out the relay at first and that scored Lopez with the go-ahead run.

Justin Watts is 3-0 on the season after two shutout innings against Hillsboro Saturday.

Cobi Johnson took over in the ninth for Justin Watts who worked the seventh and eighth in relief of Espada and nailed it down for his fourth save of the year. 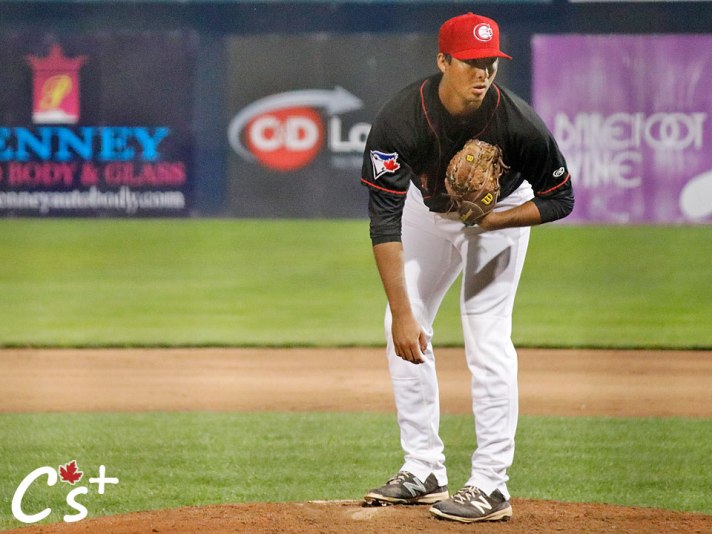 Cobi Johnson converted his fourth save in as many opportunities with a shutout ninth.

Jose Espada allowed two runs over six innings and struck out seven in a quality start.

Watts got a swinging strike on a curveball at 70 and reached as high as 92. He had one strikeout at 84.

Johnson was clocked in the low-90’s.

Hunter Steinmetz made the defensive play of the game with a diving catch in left field in the ninth inning.

Hunter Steinmetz robbed Hops cleanup hitter Ryan Tufts of extra bases with a diving catch on the warning track in left field near the nook and cranny of the C’s bullpen to start the ninth. That “Tufts” catch was favourably compared in the press box to one made by Reggie Pruitt last season in center field.

Another solid defensive play from the C’s came in the fifth when Griffin Conine unleashed a strong throw to third after catching a fly ball from Keshawn Lynch. The ball made it to Lizardo who tagged out Zach Hoffpauir after he overslid the bag to end the inning. Before that play, Lopez made a leaping catch on a Perez liner to second and nearly doubled off Hoffpauir after he singled and stole second.

Espada had baserunners to deal with in four of his six innings as he wound up plunking a couple of hitters in the first two frames. He recovered from an errant pickoff throw in the fourth in trying to get McCarthy at first by striking out Zachary Jones to end the second.

The eighth inning involved a pair of controversial plays. Watts plunked Caballeros in the forearm with a pitch but C’s manager Dallas McPherson came out to argue. It appeared the ball may have hit the bat. The bottom half saw Rodriguez get rung up by the umpire on swinging at strike three when it appeared he easily checked his swing on a 3-2 offering from Larrison.

After the strikeout of Rodriguez, Conine ripped a ball just foul down the right field line. That was enough for Hops manager Shawn Roof to order the intentional walk just before Lizardo’s fielder’s choice RBI to bring home Lopez with the winning run. 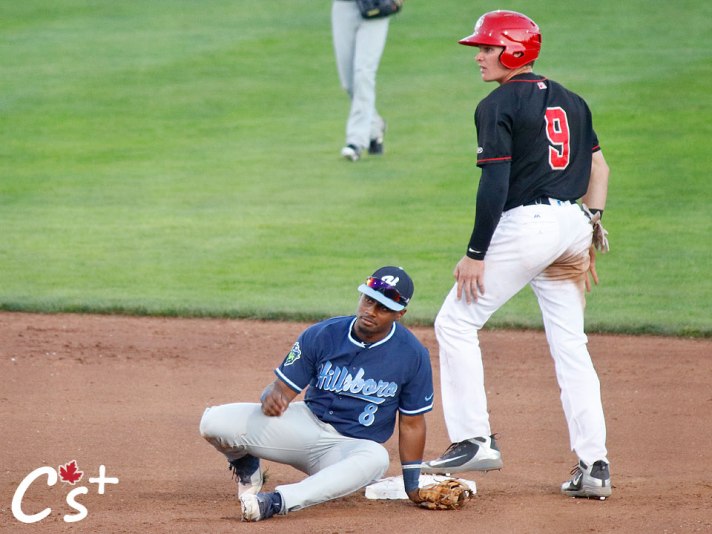 Griffin Conine steals first as a desponded Keshawn Lynch could not hang on to the ball in the sixth.

Lopez and Tanner Kirwer had the two-hit nights for Vancouver. Kirwer’s second hit, a double down the left field in the seventh, led Roof to argue the ball was foul. Jake Brodt had a hit and was robbed of another in the eighth when Lynch made a diving play to snare a grounder at second. That was a big play by Lynch as Lizardo may have scored after being on second with a stolen base. Conine also stole his first base of the season. Vancouver was 1-for-7 with runners in scoring position with six men left but they only struck out three times while getting eight hits and two walks.

Though three hitters were plunked, the C’s pitching staff allowed just five hits and a walk while striking out nine.