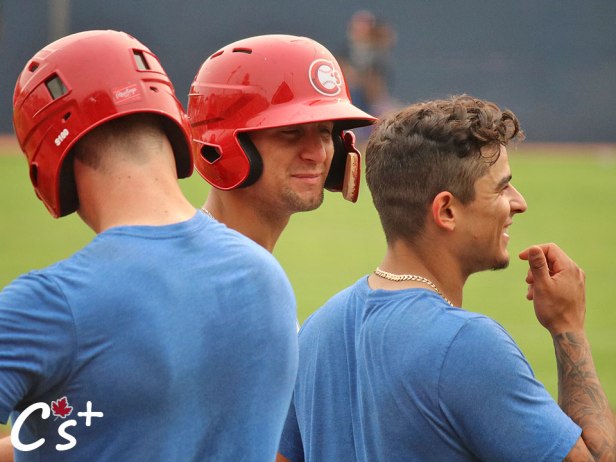 The Vancouver Canadians got their first win of 2018 in Pasco, Washington with a 5-2 triumph over the Tri-City Dust Devils at Gesa Stadium Tuesday. The C’s needed the victory as Spokane blanked Everett to remain within two games of Vancouver for first place in the North Division.

The C’s wasted little time getting on the board as Otto Lopez reached on an infield single to second on the second pitch of the game from Henry Henry. Tanner Kirwer then tripled to center on a 0-2 pitch to score Lopez with the game’s first run. Christopher Bec also got aboard on an infield single to short to bring in Kirwer. Bec would make it to second on a throwing error by Tucupita Marcano. Henry retired Griffin Conine and Jake Brodt on fly outs with the latter advancing Bec to third. A balk by Henry would allow Bec to trot home with the third Canadians run.

The Dust Devils would respond with a run in their first at-bat. Grant Little doubled off Sean Wymer with one away and would scamper home on a Marcano base hit. Marcano was thrown out at second by Conine in right field to put a wrench into the Tri-City rally.

Tri-City would creep closer in the fifth when Blake Hunt worked a leadoff walk against Joey Murray. A Tre Carter single and a Michael Curry infield knock to third loaded the bases with one out but all the Dust Devils could muster was a one-out Tyler Benson sacrifice fly to score Hunt.

Brett Wright hit his fifth home run of the season in Tri-City Tuesday.

Vancouver would put the game away in the ninth when Nick Podkul doubled and scored on a Brett Wright home run to left off Wen-Hua Sung.

Justin Watts earned the win with two perfect innings of relief. Marcus Reyes tossed a spotless eighth before Orlando Pascual got the save with a one-hit ninth that was erased by a game-ending 4-3 double play.

The C’s had opportunities to pad their lead after the first inning. Brandon Polizzi put down a bunt single and Lopez followed with a base hit of his own but they would be stranded. Brodt had a two-out double in the third but did not score.

The fifth inning saw Lopez single but he was thrown out trying to steal second. Kirwer followed up with a single of his own but he was also nailed trying to swipe the keystone bag.

In the sixth, Conine was hit by a Kulman pitch and Sterling Guzman walked with two outs but they were also left on base.

Lopez had three hits while Kirwer and Polizzi had two each. All nine C’s hitters reached base by a hit, a walk or a hit by pitch. Conine and Polizzi stole a base. Vancouver had 11 hits, a walk and a plunk along with nine strikeouts. With runners in scoring position, the Canadians were 2-for-10 with six men left on base.

Justin Watts ran his record to 4-0 with two perfect innings in Tri-City Tuesday.

Wymer retired the last seven hitters he faced, striking out three as he gave up a run on two hits. Murray hit Little with a pitch to start the fourth but Wright threw out pinch-runner Luis Ascunsion trying to steal second. Murray—who struck out three—started a string of 12 batters in a row retired by the C’s bullpen. Watts whiffed three over his two perfect frames while Reyes retired the side in order in the eighth. Pascual faced the minimum to pick up his first save.

The third and final game of the series will see Sam Keating (3-6, 5.63) scheduled to throw the first pitch at 7:15 pm. Nick Allgeyer (0-1, 2.79) gets the start for Vancouver. You can listen in to all the action with Rob Fai at CanadiansBaseball.com.

Sinclair gets the @VanCanadians games at The Nat in tune https://t.co/nBvXBWvgge

Happy together with the @VanCanadians: Andrews and Sinclair work well as the words and music at The Nat https://t.co/Aj551dh99o

Ushering in another season: Hans Havas has been seating people at Nat Bailey for 40 years https://t.co/FL0WZSTgVA pic.twitter.com/jVpBZaOils