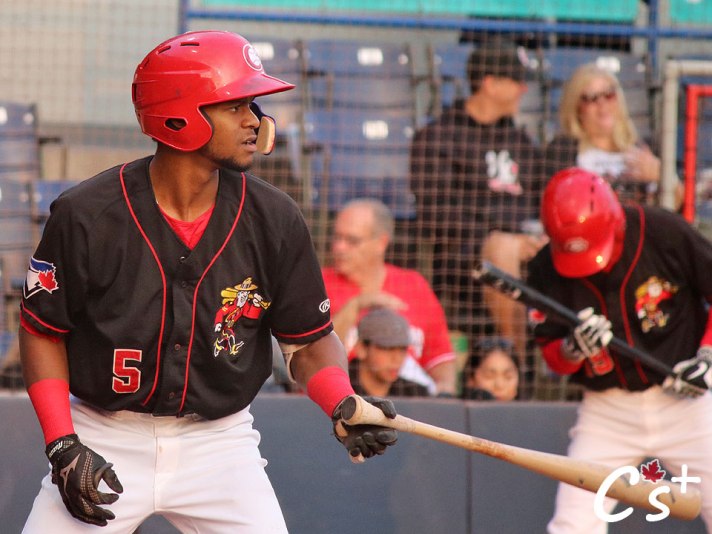 Otto Lopez keyed a two-run rally for Vancouver in the seventh inning Saturday.

The Vancouver Canadians came up with enough timely hitting, pitching and defence as they downed the Boise Hawks 4-3 at Nat Bailey Stadium Saturday night. The C’s still maintain a one-game advantage on Spokane for first place in the North Division after the Indians took their third straight against Salem-Keizer.

Boise struck first in the first one by getting to Josh Winckowski for a pair of runs in the second inning. The Hawks were able to load the bases with a one-out walk to Daniel Jipping and an L.J. Hatch single before Cole Anderson extended the inning with a two-out walk on a 3-2 pitch. Terrin Vavra then grounded one up the middle to score Jipping and Hatch.

Vancouver finally busted through with two runs of their own against Pearson McMahan in the fifth who was betrayed by his defence. Nick Podkul picked up a one-out walk and would score on a Christopher Bec single to left and an error by Vavra at second. Otto Lopez got aboard with an infield single to third and a throwing error by Hatch saw Bec come in from second with the tying run.

A seventh-inning double by Griffin Conine plated what proved to be the winning run Saturday.

The C’s would push ahead in the seventh when Podkul got on base with a single to short against lefthander Colten Schmidt. Brandon Polizzi pushed a bunt up the first base side and nearly beat it out by diving toward the first base bag but he got Podkul to second. With two away, Lopez poked a base hit up the middle to score Podkul with the go-ahead run. Griffin Conine followed with a run-scoring double off the wall in center field to bring in Lopez with the fourth Vancouver run.

Troy Miller, Will McAffer and Joey Pulido and held Boise off the board for four innings. The Hawks would get closer in the ninth when Vavra picked up a one-out triple to left-center off Orlando Pascual after the ball glanced off the glove of McGregory Contreras in left. Vavra would score on an Abreu groundout to second but Pascual would get Morgan to ground out to third to end the game.

Mike Nikorak—Colorado’s first round pick in 2017—and Reagan Todd contributed scoreless relief in the sixth and eighth for Boise.

Winckowski registered two of his strikeouts at 87 miles per hour. He reached 95 and 97 at one point.

Winckowski overcame a Willie Abreu one-out double that landed right on the left field line in the first inning but he got a bad bounce in the second as Hatch chopped a single that bounced over the head of Jake Brodt at first. That hit started the two-run rally for the Hawks.

Winckowski got a huge assist from Polizzi to get out of the third. After Luke Morgan got an infield hit to begin the inning, Willie MacIver made a bid for an extra-base hit to the left-center field gap. Polizzi had other ideas as he laid out to make a incredible diving catch. He then got up and fired a strike to Podkul at second who quickly relayed the ball to Brodt at first to double off Morgan.

Mr. August himself lays out during the top of the 3rd and doubled up the Hawks. Casual 8-4-3 double play to end the inning. #AtTheNat pic.twitter.com/5Ni7f7GmZY

The third inning also saw Bec get shaken up after a foul tip from MacIver. It was a good show of sportsmanship from MacIver to show concern for his fellow catcher. The home plate umpire also made sure to give Bec more time to recover by dusting off the dish.

The fourth inning was not an easy one for Winckowksi either as he hit Hatch with a pitch with one away and walked Anderson with two away. A wild pitch moved both runners up but Winckowski won the duel against Vavra this time by striking him out looking to end the rally. Miller had a clean fifth but he got into trouble in the sixth on a strange play. Willie MacIver singled up the middle and was awarded third base on a two-base throwing error by Miller. Apparently, Miller tossed the ball to the ball boy for a new baseball when he should have tossed it to the umpire.

Unfortunately he can’t do that…

Jipping would hit a ground ball to third where Sterling Guzman threw it to home where Bec would tag out MacIver at the plate to keep the game tied. Jipping would get to second base on a wild pitch but Miller would get out of the inning with an inning-ending strikeout of Kennard McDowell.

McAffer got into a two-out jam in the seventh when Abreu doubled and Morgan walked but he struck out Cade Harris to leave them stranded. 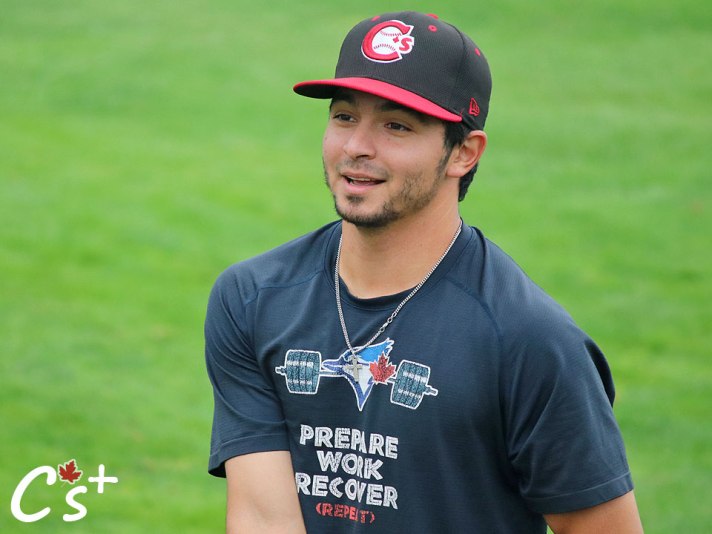 Joey Pulido got the game to the ninth by pitching a scoreless eighth inning for Vancouver.

Pulido also had to overcome adversity in the eighth when MacIver reached on a Guzman fielding error at third but he struck out Jipping and Hatch before retiring McDowell on a flyout to left.

Will McAffer earned the victory and Orlando Pascual (above) got the save against Boise Saturday.

Winckowski gave up two runs on four hits and three walks but struck out six in four innings. Miller pitched two innings of one-hit ball with a pair of strikeouts. McAffer offset a hit and a walk with two punchouts to improve to 6-2 on the season. Pulido struck out two in a shutout eighth before Pascual was nicked for a run on one hit. He struck out one to get his second save.

Vancouver was poised to take the lead in the first when Bec singled up the middle, stole second and made it to third despite a Lopez groundout to third, showing the aggresive baserunning that has been a trademark the C’s all season. Conine would walk and steal second but Brodt struck out and Contreras grounded out to come away empty-handed.

Guzman drew a walk to start the second but Severino grounded into a double play. Podkul followed with a single but Polizzi would strike out to end the inning.

Brodt singled to start the sixth and stole second after a Contreras strikeout but he would be stranded. The C’s got two more runners aboard in the eighth when Contreras singled but he was caught steaing. Severino drew a two-out walk but nothing else developed from that. 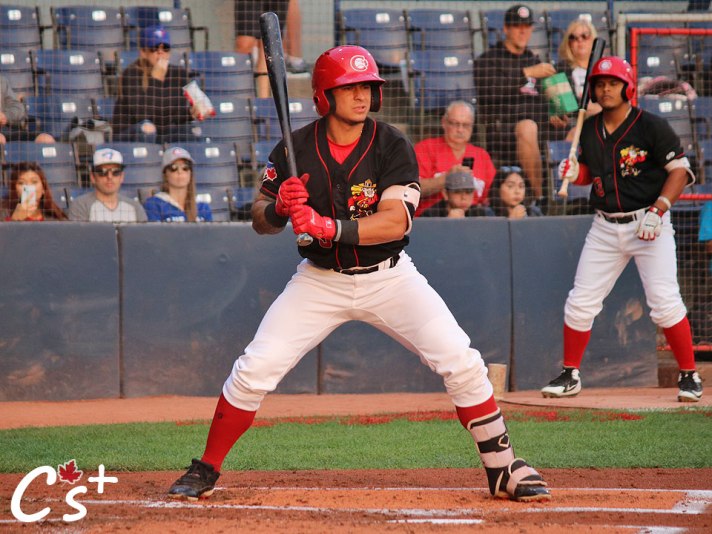 Christopher Bec was one of three Vancouver players with two hits Saturday.

Bec, Lopez and Podkul had two hits apiece with Podkul also drawing a walk and Bec stealing his 14th base of the year. Conine also reached twice with a hit and a walk and picked up his fourth stolen base. Brodt had a base hit and a base stolen while Severino and Guzman both had bases on balls. Polizzi was 0-for-2 but laid down a bunt and laid out for the catch of the year.

The Canadians had nine hits and four walks against eight strikeouts. They were 2-for-9 with runners in scoring position and left seven men on base.

When @thisdudebp went flat out to catch that ball then to jump up and throw back to 1st for the double play, the Nat went absolutely nuts. This is the best all round baseball this year. pic.twitter.com/Zyin2btlko

This summer we have hosted Nick Allgeyer in our home. Aside from being an amazing left-handed pitcher, he has volunteered with the @vancanadians @bc_challenger day #AtTheNat. Vote for Nick. https://t.co/cYO9qEhoix

Have you voted yet? Don’t forget to select your favourite Canadians player! #AtTheNat

Voting ends on the 28th! https://t.co/cSnrZWQumr