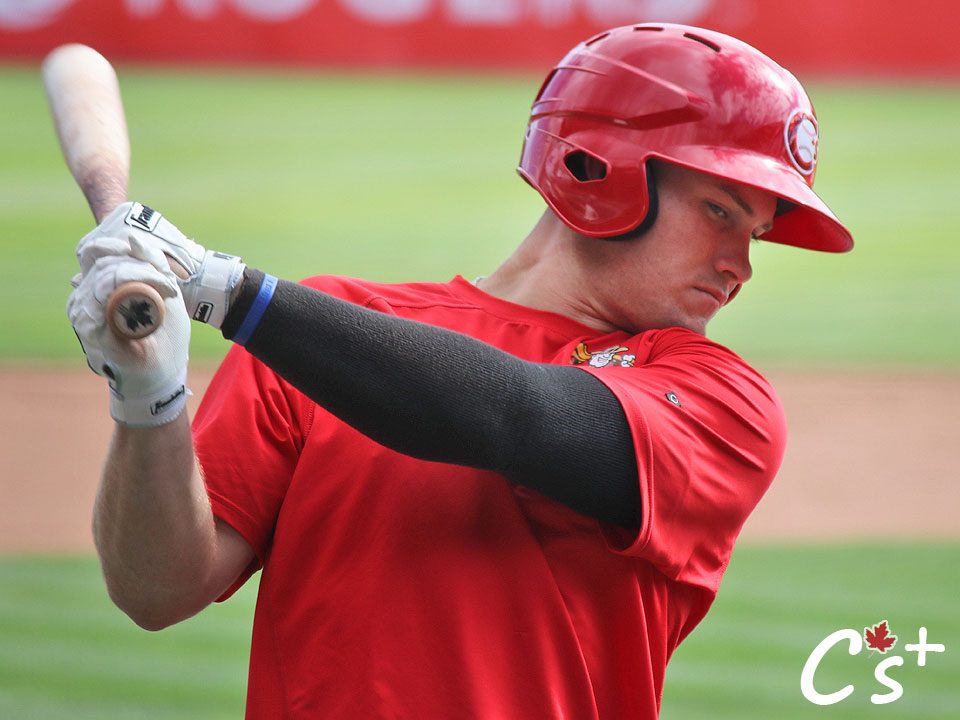 The Vancouver Canadians resumed their season-long trend of stranding too many men on base. The C’s left 14 men on as they fell 6-4 to the Everett AquaSox at Nat Bailey Stadium Sunday.

Carter Bins homered just over the fence in front of the videoboard off C’s reliever Alex Nolan to begin the fourth inning. Cesar Izturis Jr. kept the inning going with a two-out single, stealing second base and scoring on a Miguel Perez base hit.

The AquaSox added another run in the fifth off Nolan when Utah Jones led off with a single and eventually scored on a two-out knock by Cash Gladfelter.

The Canadians defence betrayed Gage Burland in the eighth. A wild pitch/strikeout allowed Gladfelter to reach base but Gladfelter could been thrown out by catcher Brett Wright had his throw to first not been off the mark. A single by Cade Marlowe put Gladfelter into scoring position and it appeared he was going to stop at third after an Izturis single to center but a bobble by Adrian Ramos allowed Gladfelter to score Everett’s fourth run.

Vancouver cut the Everett lead in half in the bottom of the eighth. Yorman Rodriguez reached on a throwing error at third by Austin Shenton and McGregory Contreras was hit by a pitch from Garrett Westberg. A Wright walk with one away loaded the bases and Davis Schneider punched home the first run with a base hit up the middle to score Rodriguez. Ramos walked on four straight pitches to bring in Contreras. Travis Kuhn was brought in from the Everett bullpen and he struck out Tanner Morris and got Trevor Schwecke to pop up to first to leave the bases full.

The Frogs restored their four-run advantage in the ninth when Parker Caracci issued a leadoff walk to DeAires Moses and balked him to second. Jones bunted him over to third before Shenton doubled to left to score Moses and moves Jones to third. Wright would pick off Jones but a Trent Tingelstad double would score Shenton to make it 6-2 Everett.

The bottom of the ninth saw Vancouver make a game of it when Rodriguez singled with one out before Will Robertson doubled him home with two outs. Wright was hit by a pitch and Schneider followed with a double to score Robertson and put two runners in scoring position. Ramos would fly out to left to end the game.

Evan Johnson kept Vancouver off the board for the first four innings and Kipp Rollings did the same for the next two to get the win despite five hits allowed.

Izturis had a strong game at short with the AquaSox. The son of the former Blue Jay showed nice range towards the hole to retire Luis De Los Santos to end the first. He robbed Wright of a hit in the fourth with a diving stop to his right and was able to make the throw in time at first. Izturis Jr. then started a 6-4-3 double play to end another C’s rally in the fifth.

Jones and Perez were involved in a head-on collision on a fly ball to shallow centre from Robertson in the eighth. The second baseman Jones managed to hang onto the ball. The center fielder Perez took several minutes to recover but was able to remain in the game.

Vancouver wasted a number of opportunities to score. The second inning saw Rodriguez lead off with a single and Robertson walked with one out. They moved up 90 feet on a Bins passed ball with two out but Schneider grounded out. Even though the AquaSox escaped the inning unscathed, it appeared manager Jose Moreno took issue with base umpire Kyle Stutz for making an out call on Rodriguez when it was ball four to Robertson.

The third inning saw Ramos get plunked by a pitch before stealing second. That was followed by a walk from Morris but the C’s could not get the ball out of the infield as Schwecke and De Los Santos popped up before Rodriguez struck out swinging.

Contreras nearly left the yard to begin the fourth but Moses made the catch just in front of the C’s bullpen in left field. Robertson followed with a double to right-center field. He got to third on a Wright grounder but was stranded when Schneider flied out.

Morris and Schwecke singled with one out in the fifth but were turned away when De Los Santos grounded into a twin-killing.

Vancouver filled the bases in the sixth on base raps by Rodriguez, Robinson and Wright. Contreras lined out to left after Rodriguez’s single. Again, the C’s could not even get a productive out as Schneider and Ramos were retired on infield pop-ups.

Contreras tried to make a running catch in foul territory on a fly ball lifted by Shenton in the fifth inning. He was unable to get there in time as he ran past the ball and ran down the steps of the C’s dugout to slow his momentum. It seemed reminiscent of Bo Jackson running into the tunnel after a touchdown against Seattle at the Kingdome or Forrest Gump deciding to keep on running.

Adam Kloffenstein gets the ball for Vancouver in the second game of this series against Everett Monday. Luis Quinones gets the start Tuesday. Both games at Nat Bailey Stadium begin at 7:05 pm.