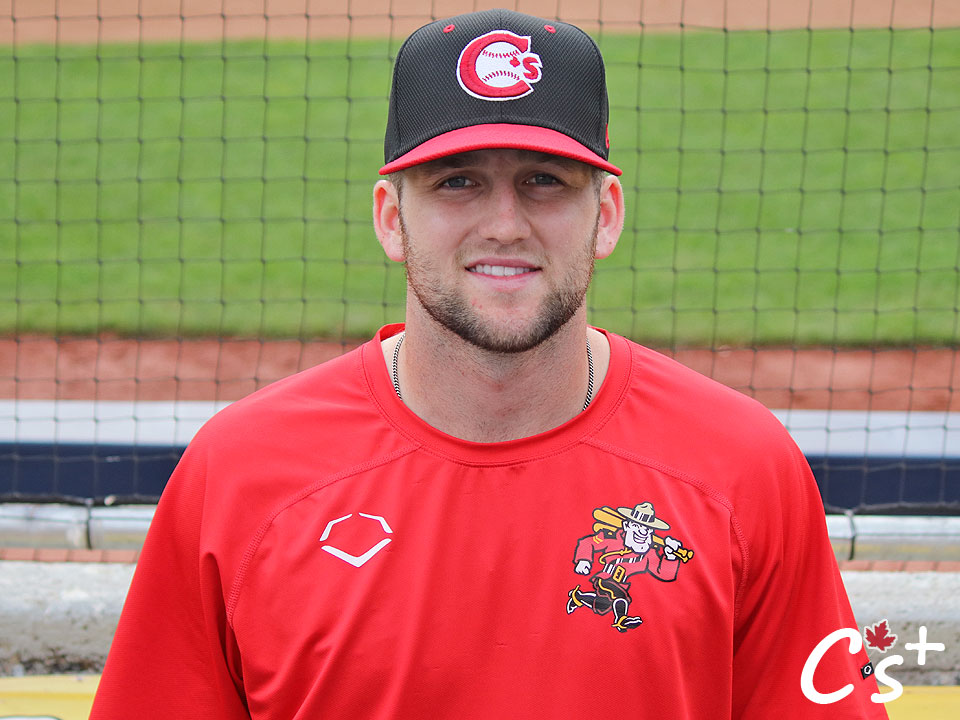 Protecting the pentagon in this edition of C’s Chat is 2019 Vancouver Canadians catcher Philip Clarke.

The Toronto Blue Jays selected the Atlanta born, Franklin, Tennessee resident with their 9th pick in the 2019 Major League Baseball Draft out of Vanderbilt University. The Commodores finished atop the NCAA Baseball Mountain by winning the College World Series against Michigan last month. Clarke had a three-hit night as the cleanup hitter in the third and deciding game against the Wolverines. He scored what proved to be the winning run and drove in Miami Marlins first round pick J.J. Bleday with a single in his final college at-bat.

With the game well in hand, Clarke was thinking about how to celebrate the final out.

“It was amazing. It’s what we worked for all year and for a guy like Jake Eder to finish it off was awesome. I kind of black out after that. You see all the final outs and the final strikeouts and so I was planning on how I was going to jump on Jake or whatever but Pat (Pat DeMarco) caught it (in center field). I just hugged Jake and the next thing I know, I was on the bottom of the dog pile so it was awesome.

It’s just a bunch of emotions that have been bottled in so that we could keep centering ourselves after every game this year. We just finally got to let them all out and just celebrate as a team. It’s something I’ll never forget.”

Despite dropping Game 1 to Michigan in the CWS final, Clarke says the Commodores remained focused on the task at hand.

“I think just our ability to take it game by game and not get too excited after a win but to be just that consistent. I think the moment that stands out the most to me is losing Game 1 of the finals. The next morning we have our team meeting and there’s no different energy, like it’s the exact same even though it’s do or die. Our team just always believed in us and knew that we could come back from it.”

The Vanderbilt-Michigan matchup pitted Commodores coach Tim Corbin against former Vandy assistant Erik Bakich. For Clarke, he was happy to do his part to help the master defeat his apprentice.

Batting .362 during the College World Series, Clarke also had the walk-off single in the SEC Tournament Final against Ole Miss.

“I think the coaching staff. How much time they invested in me in my two years there. It really made me such a better player. I’m just really glad I went there, especially in this atmosphere. The things that they taught me really transfer to any field. I think just their investment level into me is probably what stands out the most to me.”

One area that the 5-foot-11 Clarke feels he made strides in was his work behind the plate.

“It’s night and day from last year to this year. I struggled last year in my freshman year at Vanderbilt. I worked really hard. I worked with our coaches, our catching coach and the guys in the Cape and it was paid off. I definitely see a big difference in my catching.”

With a College World Series title on the resume, Clarke agreed to a $500,000 signing bonus to forego a return to Vanderbilt for his junior season. He says he was at home when he found out he was taken by Toronto but he really did not have the time to celebrate.

“I was sitting at home and Nate Murrie, the area scout for Tennessee, called me. He just said, ‘Welcome to the Jays!’ It wasn’t anything special. I didn’t have a draft party or anything. I was just sitting at home with my parents. Pretty low-key. I celebrated with my family but at that point, I still had a lot of work to do with Vanderbilt so I tried to put it on the back burner a little bit.”

Getting drafted by Toronto was not a huge surprise to Clarke.

It’s a good organization and it has a lot of Vanderbilt guys in it at the top. Last season, I didn’t really try to think about the draft at all so whoever was interested was interested so I just let it play out.”

Before arriving at Vanderbilt, Clarke attended Christ Presbyterian Academy in Nashville, Tennessee where he helped the Lions win a state championship in 2015.

“Taking my team to the state championship. Just going was an honour. We had never been to the tournament before. We went all four years that I was there and the friendships that I made there are just like the ones that I made at Vanderbilt, you know, they’ll last a lifetime and that team I’ll never forget.”

Clarke began to realize he could turn pro as his high school career wound down.

“Between my sophomore and junior year of high school. It was my high school coach. He kind of told me it would be the best path for me and make me the most successful I could be because I hit left-handed and I trusted him and it worked out.”

The one aspect Clarke enjoys about catching is being involved in every play.

“I just like being able to touch the ball every pitch. Working with pitchers is awesome. There’s two side of the scoreboard that I’m prideful about now. It’s not just our offence, it’s our defence and that’s something I love.”

As for a scouting report, Clarke is pretty succinct.

“A smart catcher. Works well with pitchers and a pretty good left-handed hitter.”

When it comes to getting to know the ins and outs of a pitching staff, Clarke says its just a matter of getting as many repetitions as possible.

“You just have to catch them. Talk to them when you can but the most important thing is getting your hands on them. Just catching their pitches and trying to remember what they throw and their strengths and weaknesses.”

One pitcher Clarke had a chance to work with in Vancouver is right-hander Adam Kloffenstein, Toronto’s third round pick last year.

So far, Clarke has proven his bat will play in the Northwest League. He homered in his first two games and is already hitting in the middle of the Canadians order.

“I’m happy with the start. I just try to take it at-bat by at-bat, you know, I don’t think about any kind of start or anything. Just trying to win every at-bat on every pitch.”

Coming off a College World Series championship, Clarke is hoping he can bring something to the table with Vancouver.

“I’m just trying to blend in with the team. Get to know the guys and be a good teammate. Make some new friends and not trying to be anything special.”

A Braves fan growing up, Clarke had no problem identifying his favourite major leaguer.

“I was born in Atlanta. I don’t know about anybody I’ll emulate but my favourite player of all time was Chipper Jones obviously.”

Thanks a million to Philip Clarke for this episode of C’s Chat. You can follow him on Twitter @PClarke_II. Thanks again to C’s Media Relations Assistant Jordy Cunningham for arranging the chat.