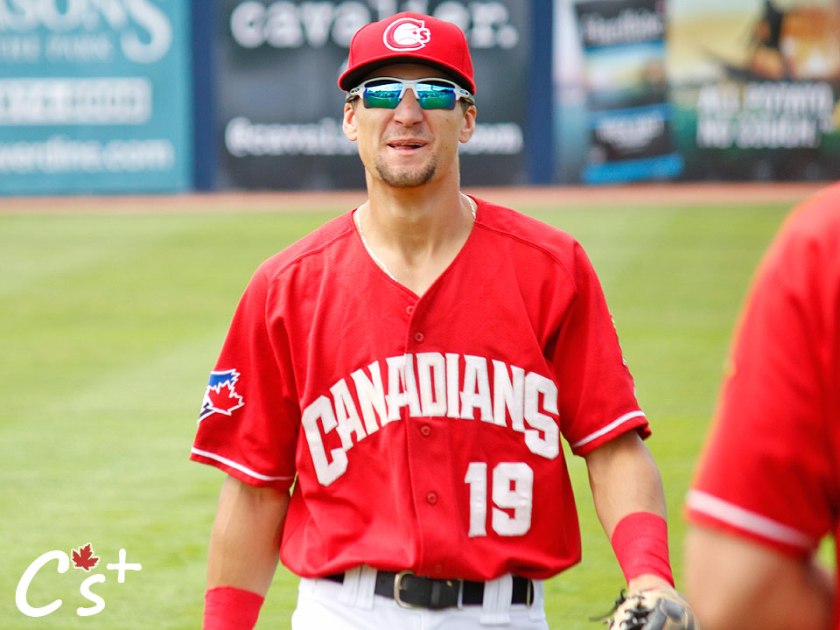 The Vancouver Canadians won four out of six in Spokane by winning the series finale 12-6 at Avista Stadium Sunday.

The C’s got to Spokane starter Helcris Olivarez for a run in the first inning. Tanner Kirwer laid down a bunt single on the first pitch of the game and got into scoring position by stealing second base. Cameron Eden got aboard on a one-out infield single to third to move Kirwer up another 90 feet before Spencer Horwitz slapped a single up the middle to bring home Kirwer.

Vancouver added to their lead in the second. Luis De Los Santos reached base on a one-out error by Isaac Collins at second. De Los Santos stole second and Rafael Lantigua drew a walk but De Los Santos was caught stealing third. Eric Rivera kept the rally going when he worked a base on balls before Kirwer launched a three-run home run to right field to put the C’s ahead by four.

Paxton Schultz shut down the Spokane bats for the first three innings but he was roughed up in the fourth. He lost to Michael Toglia and Brenton Doyle on 3-2 pitches before Kyle Datres skied one over the fence in right field to chop Vancouver’s lead down to one. A.J. Lewis bunted his way aboard two pitches later before Cade Harris doubled on the next pitch to put runners at second and third. Jack Blomgren produced a sacrifice fly to center field to score Lewis with the tying run. Schultz kept Harris at third when he got Collins to hit a comebacker to the mound but Aaron Schunk drilled a two-run homer to right to give Spokane a 6-4 lead.

The C’s stormed back with a big inning of their own in the top of the fifth. Tanner Morris was hit by an Olivares pitch and advanced another 90 feet when Horwitz worked a one-out walk. Horwitz was forced out at second on a Sebastian Espino fielder’s choice but Ryan Gold‘s double to left scored Morris from third and Espino all the way to first to even the score at 6-6. De Los Santos then went deep to right-center to bring home Gold to put Vancouver back in front by two. Lantigua continued the rally with a base hit to center and stole second base before Rivera singled him home for the Canadians ninth run.

Another Vancouver run came in the sixth when Eden was walked by Jake Sommers with one out and raced to third on a Horwitz bloop single to center. Schunk mishandled a ground ball from Espino to allow Eden to cross the plate with the C’s 10th run.

Espino contributed to Vancouver’s final rally in the ninth with a lead-off single against Jared Biddy and he would score on Gold’s two-run blast to give the C’s a dozen runs on the day.

Spokane right fielder Niko Decolati was shaken up as he slammed into the right field fence trying to catch Kirwer’s three-run home run in the second inning. The umpires originally called Kirwer out before overturning their decision. Decolati would strike out against Schultz in the bottom of the second but was replaced by Datres in right in the top of the third.

Schultz stranded a single and a walk in the first inning and a two-out walk in the second but a 1-2-3 third before being rung up for six runs in the fourth. He surrendered those runs on five hits and four walks. His strikeout total was three and his groundout total was six. Schultz is still in the top 10 in the High-A West league in earned run average at 3.60 and is in a 10-way tie for most victories with three along with Nick Fraze.

Adrian Hernandez earned his first win in a Vancouver uniform. He walked the first batter he faced in the fifth inning before getting the next three hitters in order and worked around a one-out single and a walk in the sixth before retiring the side in order in the seventh. He struck out two in his three shutout innings.

Cobi Johnson walked one in a shutout eighth and loaded the bases on three more walks in the ninth but he got out of the jam as his last two outs came on strikeouts to end the game. Johnson also got three outs on the grass.

The Canadians had seven players turn in multi-hit efforts and all nine batters reached base once. Rivera led the way with three hits and drew a walk to reach base four times. Since starting the year 0-for-32, he is now 7-for-17. Rivera also drove in his first run of the season.

The two-hit brigade was led by Kirwer and he added his 22nd stolen base of the year. Horwitz, Espino, Gold, De Los Santos and Lantigua rounded out the two-hit six. Horwitz and Lantigua reached base three times by drawing a walk. Gold drove in four runs and De Los Santos knocked home two. Eden was on base twice with a single and a free pass. Morris reached base once as he was hit by a pitch from Olivarez. That was Spokane’s ninth plunking of Canadians batters in the six-game series.

Kirwer, Horwitz and Morris are among the top 10 hitters in batting average in the High-A West league. Kirwer is sixth with a .291 mark, Horwitz has the eight-best BA at .274 and Morris is 10th at .269.

Horwitz has the league lead in walks with 31 while Kirwer is tied for third with 23. Philip Clarke has 20 and Gold and Morris are also in the top 10 with 19 apiece.

De Los Santos is third in the league in runs batted in with 24 and Eden is fifth with 22. Kirwer is in the league’s top 10 in home runs with five and still leads the High-A West in steals with 22, four ahead of Eden.

The Canadians remain perfect on Sundays as they improved to 6-0 on the season. Vancouver is one game back of Everett for first place in the High-A West standings with a record of 21-15. Everett also has 21 victories but have lost 13. The AquaSox have had two games rained out on the last two Sundays, one in Hillsboro eight days ago and one at home against Eugene yesterday. The Emeralds are a half-game behind Vancouver for second place with 20 wins and 15 losses.

Vancouver’s series in Spokane was a homecoming of sorts for manager Donnie Murphy. As pointed out in the C’s press notes, the nine-year major leaguer began his professional playing career in Spokane where he batted .303 in 28 games in 2002. Murphy was taken by the Kansas City Royals in the fifth round of the MLB draft that year.

Sean Wymer is slated their six-game series against Everett at Ron Tonkin Field Tuesday. C.J. Van Eyk and Luis Quinones are the probable starters listed for Wednesday and Thursday. Friday’s starter is TBA. The first five games of the series are 7:05 pm starts with Sunday’s finale set for 1:05 pm. All the games can be heard on CanadiansBaseball.com.

Vinny Capra (2018) homered twice and drove in five runs and Samad Taylor (2017) went yard to go with a double and two stolen bases to help New Hampshire punk Portland 9-2. Otto Lopez went 2-for-4 with a walk and a stolen base, Chris Bec (2018) had a hit and three walks and Chavez Young (2017) added a sacrifice fly. Graham Spraker got away with two hits and three walks over two scoreless frames, recording one strikeout.