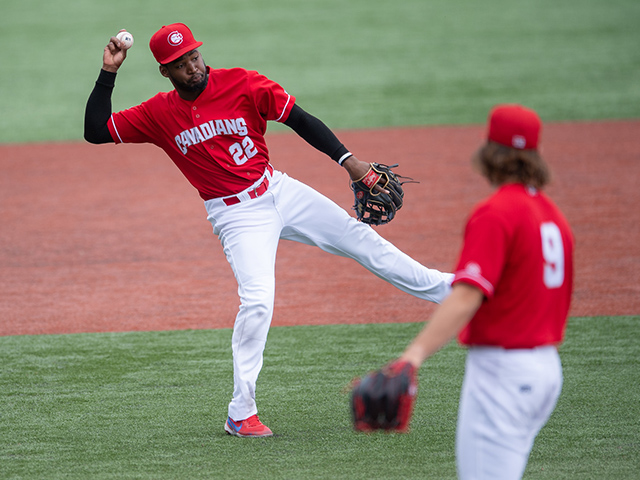 Orelvis Martinez will not start the 2022 season with the Vancouver Canadians.

The best power-hitting prospect in the Toronto Blue Jays system will be going to Double-A with the New Hampshire Fisher Cats instead. That’s according to this tweet from TSN’s Scott Mitchell who predicted Martinez would go to Manchester to begin the ’22 campaign in his Top 50 Blue Jays prospect rankings. So much for seeing the man who wore #22 for the C’s here in Vancouver in 2022.

The hopes of Martinez setting foot in YVR may have been dashed as soon as he launched a home run off Philadelphia Phillies starter Aaron Nola in Clearwater March 19. The Santo Domingo, Dominican Republic native homered again in the same park four days later. The righthanded-hitting Martinez slashed .308/.400/.923 in 13 at-bats with a double, two home runs and four runs batted in. He did strike out five times but drew a pair of walks.

It’s an aggressive assignment for the 20 year-old but the Jays player development staff obviously feel he’s ready for the challenge of playing for New Hampshire FC. Martinez did wear the Vancouver Canadians uniform in 2021 and hit five home runs in his last 11 games with the C’s after a slow start. However, the team was forced to play their home games in Hillsboro because of COVID-19. So once again, fans in Vancouver can add Orelvis Martinez to the list of top prospects to never set foot on the field of Nat Bailey Stadium, joining Blue Jays stars Vladimir Guerrero Jr. and Bo Bichette along with current number one Toronto prospect, catcher Gabriel Moreno and highly-touted infielder Jordan Groshans.

It’s a bitter pill to swallow not seeing Martinez in YVR, the best hitting prospect in the Jays system since Vladdy and Bo. I was hoping he would make a quick cameo appearance for this Wednesday’s preseason game against the UBC Thunderbirds at Nat Bailey before heading to New Hampshire but I suppose getting an introduction to life north of the border in the beautiful city of Vancouver in front of the supportive and loyal fans of Monty’s Mounties—who have been starving for baseball for almost three years—is too logical and makes way too much sense.

The Toronto Blue Jays have released 2019 and 2021 C’s righthander Willy Gaston. The 25 year-old from Havana, Cuba signed with the Jays as a free agent in December of 2018. He made his professional debut at Nat Bailey Stadium with five innings of two-run ball, striking out seven against Spokane June 16, 2019. Gaston’s first professional win came against Tri-City July 16 when he tossed four shutout innings of relief. The 6-foot-5 hurler finished the year with a 3-3 record and a 3.23 earned run average. His best outing was in Spokane when he blanked the Indians for six innings and struck out six July 27.

Gaston began 2021 with Low-A Dunedin and went 2-0 with a 1.69 ERA over four appearances before being promoted to Double-A New Hampshire but he went 0-1 with a 10.50 ERA in five games. That led to Gaston being reassigned to Vancouver where he finished out the year with totals of 1-3, 6.91 over 43 innings. His ERA in August of 3.21 was highlighted by three shutout inning appearances against Tri-City August 20 and in Hillsboro August 28.

The transactions page on CanadiansBaseball.com also announced that 2019 C’s righthander Jared DiCesare has retired. A 17th round pick of the Blue Jays in 2019 out of George Mason University, the pride of Fairfax, Virginia began in his pro career in his home state with Bluefield and went 2-1 with a 3.60 ERA over four appearances, earning Pitcher of the Week honours in the Appalachian League July 1-7.

DiCesare was promoted to Vancouver July 17 and earned a win in his C’s debut in Spokane July 19 with 3-2/3 innings of two-run ball and four strikeouts. He finished his Vancouver tenure by winning both of his decisions with a 3.60 ERA. He was also the last pitcher to make a start for the C’s at Nat Bailey Stadium, spinning a season-long five innings of one-run ball in the 2019 season finale against Tri-City August 30. A bullpen meltdown prevented him from getting the win as the Dust Devils rallied and clinched a playoff berth instead. DiCesare did not pitch at all in 2021. He will turn 22 years old on April 21. You can check out a chat with DiCesare at C’s Plus Baseball right here.

All the best to Willy Gaston and Jared DiCesare in their future endeavours.

A tip of the cap to 2015 Vancouver Canadians lefthander Tayler Saucedo for talking about his mental health struggles in this article by Ethan Diamandas of Sports Illustrated. The 28 year-old from Honolulu, Hawaii made his big league debut in 2021 in New York against the Yankees June 17, striking out Miguel Andujar in a perfect frame. He was robbed of his first major league save against Detroit August 22 when Marcus Semien literally threw it away. Saucedo was called upon to face left-handed hitting Harold Castro and induced a ground ball to second that should have ended the game. Saucedo showed great composure by encouraging Semien to shake it off and went on retire Zack Short on a fly ball to center for the final out of the inning.

So far this spring, Saucedo has not given up a run over 4-1/3 innings and should earn another trip to Toronto sooner rather than later in 2022.

2019 C’s righthander Mike Pascoe is back in affiliated baseball after agreeing to a minor league deal with the Miami Marlins. He pitched in the independent Frontier League with the New York Boulders and New Jersey Jackals in 2021. C’s Plus Baseball chatted with the 24 year-old from Arlington, New York during his time in Vancouver.

2014 C’s lefthander José Manuel Fernández will be playing ball in Canada in 2022 with the Hamilton Cardinals of the Intercounty Baseball League. The 29 year-old from Mao in the Dominican Republic pitched for the Toronto Blue Jays in 2018 and for the Detroit Tigers in 2019. Hernandez was 1-1 with a 4.01 ERA with 24 strikeouts in 24-2/3 innings with the C’s eight years ago. After signing as a free agent with Toronto in January of 2012, he made his MLB debut with a shutout inning in Miami September 1.

2012 C’s outfielder Dalton Pompey will also be playing his trade in the Intercounty League as he will be with the Guelph Royals. The 29 year-old from Mississauga, Ontario—who spent parts of the 2014, 2015, 2016 and 2018 seasons in Toronto—was in the Los Angeles Angels system with Double-A Rocket City and Triple-A Salt Lake.