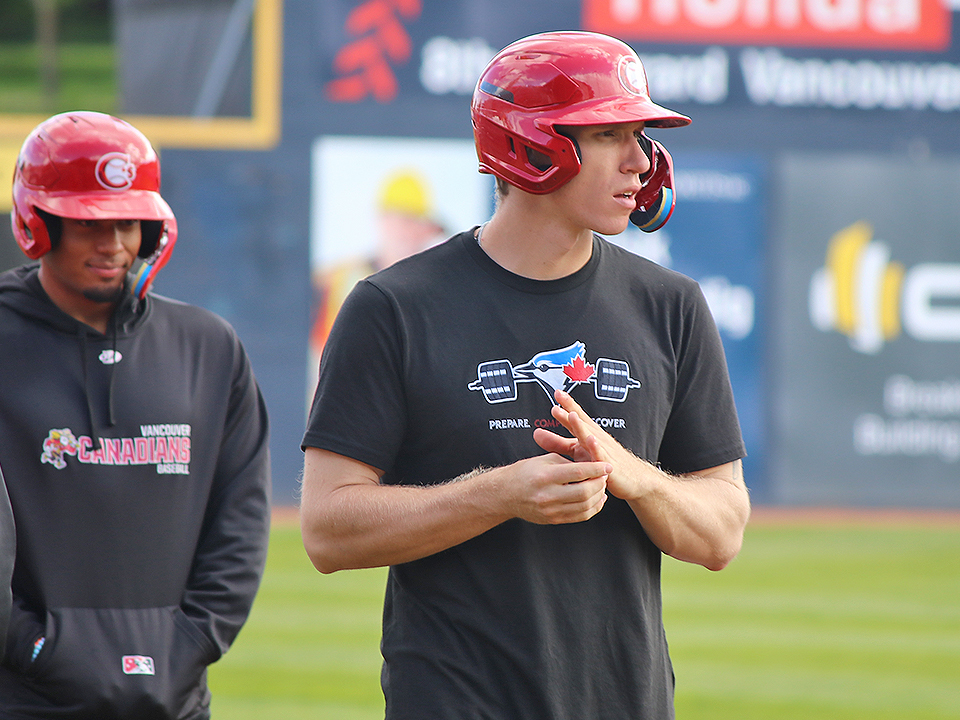 The Vancouver Canadians lost their second in a row to the Tri-City Dust Devils (Viñeros de Tri-City) 7-5 at Gesa Stadium Thursday.

Vancouver starter Yosver Zulueta got ahead of Dust Devils leadoff hitter Jordyn Adams at 0-2 but an fielding error by shortstop Leo Jiménez allowed Adams to reach base. José Guzman walked and he and Adams moved up 90 feet on a wild pitch one out later. Zulueta got Osmy Gregorio to hit a comebacker to the mound and ended with Adams getting tagged out by third baseman Hugo Cardona. A base hit up the middle by Steven Rivas would score Guzman with the game’s first run.

The C’s fought back in the second inning when Trevor Schwecke drew a leadoff walk against Robinson Piña. A wild pitch got Schwecke over to second and he would score on a two-out single to left by Mack Mueller.

Tri-City would take the lead again in the second. Straton Podaras drew a leadoff walk and Christian Molfetta singled to center with one out. They would score on a double to left by Adams. A bunt single by Guzman and a throwing error by Zulueta allowed Adams to score and Guzman to get to second base. A two-out double by Gregorio brought in Guzman to make it 5-1 Dust Devils.

The Canadians scored next in the fifth when Schneider led off with a single and swiped second. He made it to third on an Addison Barger groundout to first before scoring on a Jiménez infield single to second.

The Dust Devils responded in the seventh against Conor Larkin. A one-out double by Guzman and a walk to Kyren Paris both moved up 90 feet when Guzman went to third on a Gregorio fly ball to center and Paris stole second. Rivas drove in both runners with a double to left.

Vancouver would draw closer in the eighth off Brandon Dufault as he began the inning by hitting Andrés Sosa with a 3-2 pitch before Mueller drove one over the wall in left-center to cut the Tri-City lead to 7-4. Steward Berroa would also go deep to right field for a one-out solo shot for the final run of the game.

The Canadians collected their first hit on a Davis Schneider single to left with one out in the first inning. He stole second with two outs but was left on base when Jiménez struck out.

Vancouver loaded the bases after Mueller’s RBI single in the second when Cardona singled to center and Steward Berroa walked but Schneider grounded out to second.

After going down in order in the fourth, the C’s chased Piña from the game in the fifth inning on Jiménez’s infield RBI single. Schwecke singled off to right off Kyle Molnar but was thrown out at second on a 9-6 play. Hiraldo drew a walk and made it second on a wild pitch to join Jiménez in scoring position but Sosa flied out to right.

Berroa had a two-out walk in the sixth and Schwecke heard ball four with two outs in the seventh but they would be stranded.

Schwecke had a one-out single to center in the ninth off Dakota Donovan but Hiraldo hit into a game-ending 5-4-3 double play.

Schneider, Jiménez, Schwecke and Mueller also had two hits with Schwecke drawing two walks and Schneider stealing two bases. Berroa had two walks to go with his third homer of the year. Mueller belted his second long ball. Hiraldo had a single and a walk and Cardona had a base hit to give Vancouver 11 on the night. The C’s were 2-for-9 with runners in scoring position and stranded 10 men.

Zulueta had four strikeouts and struck out the side in the second but allowed five runs (three earned) on five hits and two walks to take the loss.

Abdiel Mendoza held the line for Vancouver by tossing three shutout innings with no hits allowed, one walk and two strikeouts.

Larkin allowed two runs on two hits and a walk and struck out over two innings. Thomas Ruwe rung up a batter in a perfect eighth.

The C’s and Double-D’s play two on Friday with lefties Ricky Tiedemann and Naswell Paulino getting the starts for Vancouver. José Salvador will throw the first pitch at 4:00 p.m. for the Dust Devils. The game can be heard on CanadiansBaseball.com.