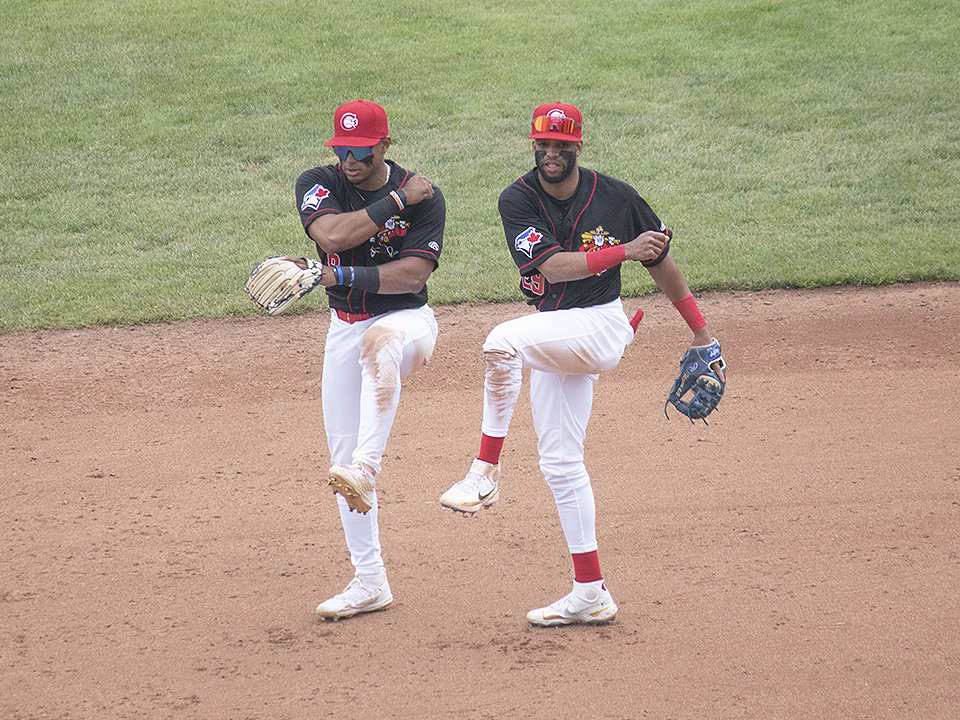 The Vancouver Canadians bounced back from their worst game of the season with a 6-3 win on Father’s Day Sunday at Nat Bailey Stadium.

The Emeralds scored twice in the second inning off C’s starter Alejandro Melean as Casey Schmitt crushed a solo shot on the third pitch of the frame. Carter Aldrete singled to right and Nygee Gaskins was credited with a single to left as Leo Jiménez was unable to come up with the sharply hit ball at short that glanced off his glove. Max Wright walked to load the bases and a fielding error by Hugo Cardona at second off the bat of Simon Whiteman allowed Aldrete to score. Cardona came in on the ball and was looking to start a 4-6-3 double play but got nobody out.

The Canadians fought back against Randy Rodriguez in the home half of the second. A single to center by Davis Schneider and a base hit to right by P.K. Morris put runners on the corners before Garrett Spain grounded a single to right to score Schneider. Andrés Sosa was hit by a pitch on the elbow on a 3-0 count to load the bases. Cardona atoned for his error by going up the gut with a base hit to bring home Morris with the tying run. Steward Berroa lifted a sacrifice fly to center to allow Spain to tag up and cross home plate to make it 3-2 Vancouver.

Vancouver got on the board again in the sixth inning. Schneider chased Em’s reliever Abel Adames from the game as Davis Schneider worked a leadoff walk on a 3-2 pitch. Morris then singled to right off Brett Standlee and both runners moved up a base with one out when Standlee uncorked a wild pitch. Cardona came through again with a two-out single to left to drive in Schneider and Morris to up the C’s lead to 5-2.

Eugene got one run back in the seventh against Justin Kelly. Leadoff knocks by Wright and Whiteman were advanced into scoring position on a Ghordy Santos bouncer to second. Luis Matos produced a sac fly who made a diving catch on a sinking, tailing liner to Spain in right to bring home Wright.

The C’s would score one more in the seventh against Nick Morreale. A double to left by Addison Barger led off the inning and Jiménez lined up up the middle to get Barger to third. Schneider then poked a single to center to bring in Barger.

Melean needed only six pitches to get out of the first inning as he fielded a soft tapper to retire Hunter Bishop for the third out.

The second inning saw Melean prevent any further damage by striking out Santos and getting Matos to hit a slow roller to the mound for an inning-ending 1-3 putout to leave the bases loaded.

The third inning was a 1-2-3 frame for Melean who struck out Bishop and Schmitt swinging with the latter whiff coming after falling behind 3-1 in the count.

In the fourth, Aldrete singled to left after falling behind 1-2 and a one-out bunt single by Wright up the third base line were advanced 90 feet by a wild pitch. Melean would get out of that jam by striking out Whiteman swinging and Santos lining out to first on a leaping catch by Morris.

Melean gave up two runs on five hits and a walk with five strikeouts over four innings.

Justin Kelly made his C’s debut in the top of the fifth and retired Matos on a grounder to short thanks to a nice stretch and pick by Morris at first. Bishop would single with one out but Schmidt would hit into a 4-6-3 inning-ending twin killing.

Luis Toribio led off the sixth inning with a base hit to right off Kelly but Toribio was wiped out on a 6-4-3 double play. The inning was over in six pitches.

Kelly struck out Bishop looking to leave Whiteman at second after the Matos sac fly to end his three-inning stint. Kelly got the win by pitching three innings of one-run ball on four hits and struck out one.

Ryan Boyer gave up a leadoff single to Schmitt in the eighth before hitting Toribio in the left foot. He struck out Aldrete looking on a 3-2 pitch but Gaskins loaded the bases with a single to left past a diving Schwecke at third to fill the bases. Boyer would strike out Wright and Whiteman swinging to keep Eugene off the board. Boyer has three holds on the year and has not yet given up a run in eight innings of relief.

Jol Concepcion handed out a leadoff walk to Santos but got Matos to fly out to center. Bishop avoided the game-ending double play as he hit into a 4-6 fielder’s choice but Concepcion struck out Schmitt swinging to end the game and pick up his second save of the year.

Berroa began the bottom of the first inning with a leadoff walk and stole second base. One out grounder to second by Jiménez sent Berroa to third but Trevor Schwecke struck out looking on a 3-2 pitch.

The C’s left two runners in scoring position in the second inning after Berroa’s go-ahead sac fly as Barger popped up to short but Jiménez flied out to center.

Spain singled to center to open the fourth and stole second base by sliding feet-first to the outside of the bag to beat the tag by Whiteman. Sosa worked a walk but was forced out on a 6-4-3 double play from Cardona. Berroa flied out to center to leave Spain at third.

Schneider stole second after his one-out RBI single in the seventh and joined Jiménez in scoring position but Morris popped up to short and Spain grounded to the six spot to end that rally.

Sosa and Cardona both singed to center off lefty Juan Sanchez to start the eighth. A sacrifice bunt by Berroa to third moved the runners into scoring range with Berroa barely being thrown out by Schmitt. Barger popped out to third and Jiménez lined out to third to leave the C’s empty-handed.

Cardona paced the C’s offence with three hits while Schneider, Morris and Spain had two apiece. Schneider drew a walk and stolen his sixth base while Spain also swiped his sixth bag of the year. Sosa was also on base three times with a hit, a hit by pitch and a walk. Barger and Jiménez had the other hits with Barger drawing a base on balls. Berroa walked and stole his 14th base to tie Miguel Hiraldo for the team lead. The C’s were 5-for-20 with runners in scoring position with six men left on the pillows.

The 28-32 Canadians wrap up their first half of their schedule with a six-game set in Hillsboro. Tuesday’s opener goes at 7:05 p.m. at Ron Tonkin Field. Tyler Zickel will have the play-by-play on CanadiansBaseball.com. The game is also on MiLB.TV.