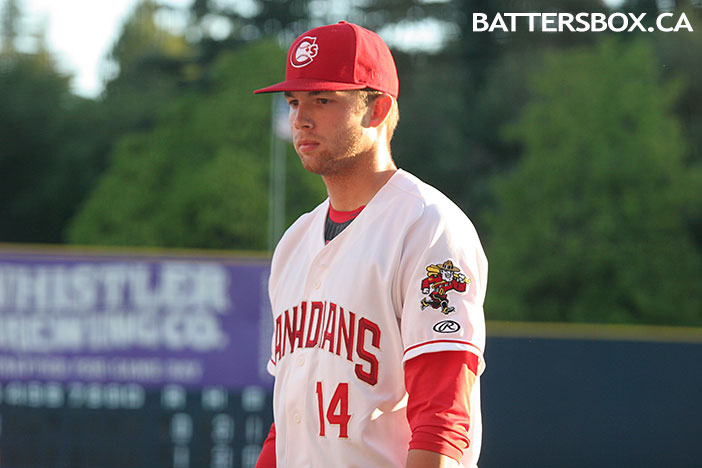 “Always the same, it’s just a shame, that’s all” – Genesis

This song was played at the conclusion of the second game of this series and it was a very fitting description of the situation the 2016 Vancouver Canadians find themselves in. A four-game losing streak at the beginning of this series was extended to seven courtesy of the Everett AquaSox as they followed up their three-game sweep of the C’s in Everett in late July with another one at Nat Bailey Stadium. The 4-10 Canadians are now six games back of the Mariners affiliate for first place in the NWL North. Barring a miracle, it does not look like their season will extend past September 5.

The C’s lost the opener 1-0 and it was the fourth one-run loss in their last five games. NWL All-Star Patrick Murphy really deserved better in this one. His only miscues were a leadoff single by Donnie Walton and a two-out double by Dimas Ojeda in the fourth to produce the only run of the ballgame. That outburst consisted of two of the three hits Murphy gave up over seven innings. He hit a batter but did not walk anyone and struck out four. He retired nine hitters in a row and 10 of the last 11 to finish with a Game Score of 77. Eight of his 14 outs in play stayed on the diamond. Zach Jackson gave up a hit and a walk but struck out two in 1-2/3 innings. Griffin Glaude gave up a bloop single but struck out the final hitter of the ninth to strand a runner for Jackson.

The C’s had a chance to tie the game in their half of the fourth when Cavan Biggio and J.B. Woodman started things off with base hits but they would not go any further. Their best chance came in the eighth when they loaded the bases with two outs. Biggio grinded out another at-bat, battling back from a 1-2 count to earn a walk to join Andres Sotillo and Rodrigo Orozco, who had both singled, on the basepaths. Woodman laid off a couple of breaking balls but was caught looking on a 3-2 fastball to end the inning.It was a tough night for the former Ole Miss Rebel. He flied out to the warning track in center field in the first base and just came up short in trying to make a diving catch on Ojeda’s game-winning double.

Deiferson Barreto had a two-out double in the second that was not cashed in. Biggio and Sotillo both had two hits. Orozco singled and walked but he was picked off at first to end the fifth. D.J. McKnight, Jacob Anderson, Christian Williams and Yeltsin Gudino went a combined 0-for-15. McKnight was a late substitution in the leadoff spot after Joshua Palacios was scratched due to illness. Considering his performance in the last two games of the series, the C’s really missed his bat in the lineup and he might have been able to make the difference in this one.

Woodman hit one to the warning track in center field as he tried to put one over the fence for the first time in his pro career.

Sotillo was caught stealing second in the third inning with D.J. McKnight at the plate. I believe McKnight took the pitch so it looked like there was missed sign there. Sotillo did throw out a runner later in the game and made solid contact on his lone out with a drive to center.

Murphy showed good composure and that was illustrated by stumbling off the mound during a pitch. He had a good laugh over it along with his batterymate Javier Hernandez.

T.J. Zeuch made his second start at home for Vancouver and his first pitch of the game, a 93 MPH fastball, resulted in a infield single to third. The official scorer ruled the play to be a hit for Bryson Brigman. Zeuch sawed off the bat of Donnie Walton on a ground ball to second for the first out. The tall righty surrendered a single to Nick Zammarelli but he managed to strand a pair of runners by freezing David Greer with an 85 MPH offering for the inning-ending strikeout.

Vancouver got their first run of the series in the bottom half of the first. Joshua Palacios got aboard on an error and Yeltsin Gudino singled him to third. A double-play grounder by Cavan Biggio brought Palacios to the pentagon.

The C’s had a chance to build on their 1-0 lead but could do nothing with a Bryan Lizard leadoff base hit in the second and a two-out walk and single by Jacob Anderson and J.B. Woodman respectively in the third.

Zeuch struck out three and allowed just a hit in the second and third innings combined. He retired the leadoff hitter in the fourth but four consecutive singles by Greer, Dimas Ojeda, Jose Leal and Ray Guerrini produced three runs to give Everett a 3-1 advantage. This is a case where Zeuch was BABIPed to death with the first three singles finding holes through the infield and the fourth being a bloop job to right. He bounced back by inducing a 6-3 inning-ending double play in the fourth and gave up just one more hit in the fifth. Zeuch scattered eight hits but struck out six, walked nobody and produced seven outs on the ground. I liked his composure on the mound and the way he walks off the mound after his strikeouts gave the impression that he expected that at-bat to end with a strike three.

Nate Abel came into the game for the sixth and worked around a double to keep the C’s to within two. In the bottom of that frame, J.B Woodman looked like he was finally going to get his first pro dinger with a drive to the left field porch but Jose Leal was there to make the catch – except that he didn’t. He dropped the ball and Woodman reached on a two-base error but that was as far as he got.

Abel had a 1-2-3 seventh but a walk and a single to the first two batters of the eighth led to his exit and the entrance of Jackson McClelland. The righthander could not strand Abel’s runners and gave up two of his own when Jacob Anderson lost a ball in the lights in left field. When it was all said and done, Everett upped their lead to 7-2.

The C’s got one run back when Cavan Biggio belted a two-out triple and scored on an Anderson ground ball but it was not nearly enough as the C’s suffered a 7-2 loss.

The good news is the C’s scored in five different innings in the series finale, two more than Everett. However, a converted touchdown in the second and a TD with a two-point convert in the third helped the AquaSox lay a 16-7 beating on Vancouver.

J.B. Woodman got his long-awaited first home run by depositing the ball into the left field porch to give Vancouver a 1-0 lead after one. Dalton Rodriguez put up a goose egg after a one-hit first but he would only get one more out as he was rocked for seven runs, five earned, but it was his throwing error on a sacrifice bunt that led to the unearned tallies. Austin Grebeck delivered the key blow with a two-run homer.

Grayson Huffman entered the game and allowed an inherited runner to score. Though he got out of the second inning, he could not get any of the seven hitters he faced in the third as he gave up a seven-spot. Gabe Noyalis walked four and struck out two as he could not strand his three inherited runners. Geno Encina soaked up 3-1/3 innings, giving up the 16th run on four hits but struck out a pair. Evan Smith gave up two hits and two walks but whiffed two in two innings and Nick Hartman gave up a hit and punched out one in the ninth.

Palacios led the way with three hits to push his bating average to .317. Woodman had a perfect day at the plate with his home run and a walk before D.J. McKnight replaced him. Christian Williams and Jacob Anderson had two-hit afternoons. Bryan Lizardo and Josh Reavis, whose catcher ERA took a savage beating, had a hit and a walk apiece. Every player in the game, save for Everett’s Dimas Ojeda, had at least a ‘1’ in the hit column.

Vancouver will face Everett one more time this season, August 26-28, in Everett. With just one win in nine tries against the AquaSox, that will not be a series anyone with the C’s will have circled on the calendar.