Otto Lopez had the only extra-base hit for Vancouver Saturday night.

Failure is no longer an option if the Vancouver Canadians want to make the 2018 Northwest League playoffs. The Spokane Indians blanked the C’s 6-0 at Avista Stadium Saturday night to move one game ahead for first place in the North Division.

A two-out home run by Julio Pablo Martinez to left-center field in the third inning off Josh Winckowski was all Spokane needed.

BOOM!!💥 J.P. Martinez with the solo shot to left-center field in the third. The Indians take a 1-0 lead on the @vancanadians through three innings. #GoSpo #TwoMoreWins pic.twitter.com/e10DdAlKYt

Winckowksi gave up two more runs on a Jax Biggers double and a Martinez single to move ahead 4-0 after five. Starling Joseph socked a two-run home run off Marcus Reyes in the sixth to round out the scoring. Troy Miller pitched a scoreless seventh and eighth for Vancouver.

Starling Joseph delivers a two-run blast to the Pepsi Porch in the sixth for his 11th home run of the season. The Indians lead the @vancanadians 6-0 now in the 7th #GoSpo pic.twitter.com/g5mjm2aRMb

Former Blue Jays draft pick Jake Latz dominated on the hill for Spokane by striking out 11 batters by allowing just one hit and three walks over 5-2/3 shutout innings. Cole Uvila pitched 2-1/3 shutout frames and Reggie Meyer finished up with a zero in the ninth. 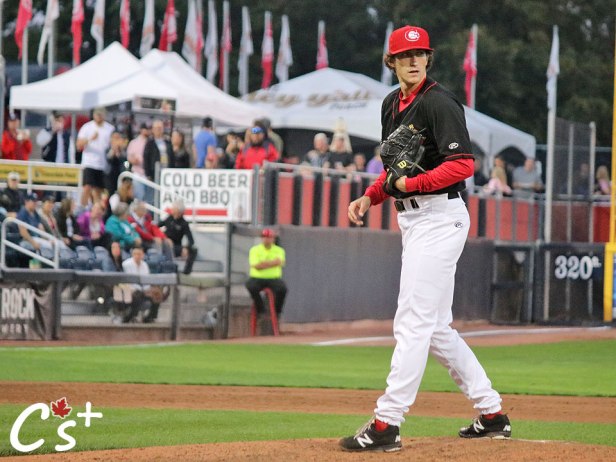 The C’s did not get their first runner on base until Jesus Severino reached base on a strikeout-wild pitch to start the third. Otto Lopez drew a two-out walk but Griffin Conine grounded out to second to strand the two runners.

The C’s best opportunity to score was in the sixth when Lopez doubled with one out and Christopher Bec and Tanner Kirwer drew two-out walks but Uvila relieved Latz and struck out Brodt looking to leave the bases loaded.

Conine had a two-out walk and stolen base in the eighth and Kirwer started the ninth with a base hit but that was all Vancouver would muster. Kirwer and Lopez both had base hits and walks but the C’s went 0-for-6 with runners in scoring position and left seven men on base. They had just two hits, four walks and 15 strikeouts.

Winckowski stranded a pair of singles in the first but gave up four runs on six hits. He struck out eight and walked nobody. Reyes was roughed up for a home run and a walk over one inning. Miller pitched struck out four over two innings of one-hit ball.

The C’s send southpaw Elio Silva to the hill (3-3, 3.69) to keep their playoff hopes alive. Rehabbing Texas Ranger Chi Chi Gonzalez will throw the first pitch for Spokane at 3:30 pm. Rob Fai will have a pregame show at 2:30 pm on TSN 1040. The game can also be heard on CanadiansBaseball.com.

Congratulations to 2014 Canadians lefthander Jose Fernandez for making his major league debut with a scoreless inning in Miami Saturday night. Congratulations also goes to 2014 C’s righthander Sean Reid-Foley for winning his first major league start today in Miami with seven strong innings of one-run ball with four hits and one walk with 10 strikeouts.

So this happened today… #Utility https://t.co/MakmJyocRm

Congratulations to Ivan Castillo and Rodrigo Orozco who finished the season tied for the Florida State League Batting Title with a .304 average. pic.twitter.com/PuoUo5X1BO

🔟 strikeouts & 1 run allowed in 7 innings for Sean Reid-Foley in his 3rd @MLB start for the @BlueJays. Watch live: https://t.co/TEpazpWbSl pic.twitter.com/gISHsIG9Su

CANADIANS: Honoured to receive the @spokaneindians Top Road Broadcaster of the Year Award. Did you hear that @AquaSoxRadio @RichBurk1? Criteria included amount of food ingested and mentions of RecycleMan… pic.twitter.com/VgoYGgNJ5k

👏Congratulations to these two former Canadians! Good luck the rest of the season @FisherCats! https://t.co/XtlGa8sVuF

Not a great photo taken by me, but here’s Daniel Norris on the field before his pro debut on 6/19/2012 in Bristol, VA, just over the state line from his Johnson City, TN hometown. 4 shutout innings for @BluefieldJays, now he’s in his 5th MLB season. Pitching in the Bronx today. pic.twitter.com/xmHnM5XkTM

Very glad to see Jose Fernandez get the call to the bigs. He’s a hard-throwing lefty whom I’ve been watching for several years and he seems to have really found some consistency this year, particularly in Buffalo.

Re: Jose Fernandez – As recently as this year, I’ve seen him pitch extremely well in a game, and get lit up. His command has improved over the past couple of years and he features a solid SL and fairly straight FB that sits 94ish, touches 97. Consistency is the key.

With 3 runs batted in last night, Josh Palacios re-took the league lead for most RBI this season with 76! With two games remaining, he’ll look to become the third consecutive D-Jay to lead the league in RBI (Juan Kelly in 2017, Ryan McBroom in 2016). pic.twitter.com/0qNx0t7GrR

Interested to see how lefty Jose Fernandez stuff plays – 94-96, wipeout slider. Pitched 6x in spring but improved all year. Dominate numbers down the stretch with the #Bisons. #bluejays https://t.co/TBTgXMnSIS

With five strikeouts on Thursday night, Patrick Murphy moved into the top 10 in Dunedin Blue Jays history for strikeouts in a single season! pic.twitter.com/jDmKDRCzPj

An analytical look into Samad Taylor’s season, with a positive conclusion. https://t.co/xoeSjoM5Nk

Anyone else woke up in a fantastic mood knowing college football is back!!? 🤗🤗 and everything is right again!

After a year and a half I can stop worrying about finding release papers in my locker for hitting him during his rehab live bp. 😅 https://t.co/4V25yDkEFD