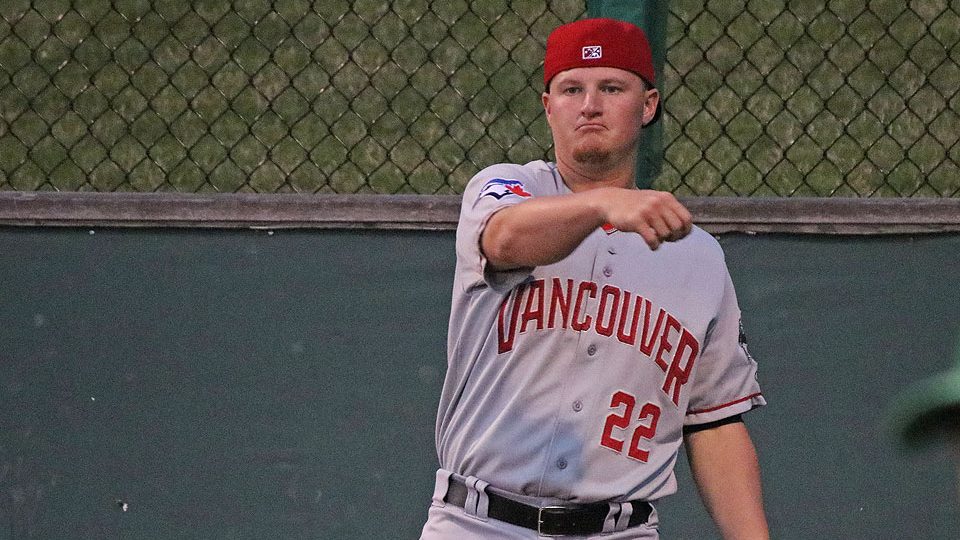 The Vancouver Canadians did not have to watch Spokane celebrate another division title victory at Avista Stadium. The C’s prevented a series sweep by the Spokane Indians after a 7-2 triumph Friday night. Vancouver saw their second-half playoff hopes go up in smoke last year when the Indians won a season-ending series at home. The Canadians made sure a similar scenio did not play itself out Friday by getting their shopping done early on offense.

Vancouver got to work on Theo McDowell with one out in the first inning. Trevor Schwecke and Philip Clarke drew a couple of walks and Jesus Lopez got to first base on an infield single to first to load the bags. Will Robertson ripped a single to right to score Schwecke and Brett Wright walked with two away to bring in Clarke. Juan Mejia replaced McDowell on the mound but that did not change Spokane’s fortunes. A throwing error by Cristian Inoa at short on a ground ball by Ronny Brito allowed Lopez and Robertson to cross the dish to make it 4-0 C’s.

Tanner Morris was plunked by a McDowell pitch to begin the second. He was tripled home by Schwecke who would score on Inoa’s second throwing error after a Clarke grounder. Robertson heard ball four with one out and that moved Clarke to second. A two-out double to left by Wright brought home Clarke but not Robertson as he was thrown on a 7-5-2 play at the plate.

Nick Fraze pitched three shutout frames for Vancouver and struck out two. Newcomer Jared DiCesare pitched a clean fourth before giving up a David Garcia home run to start the fifth. Garcia would get DiCesare again by homering again in the seventh. DiCesare would strike out four over his 3-2/3 innings.

Grayson Huffman pitched 1-1/3 scoreless frames and stranded two runners for DiCesare. Andy McGuire took care of the ninth by striking out the side to strand a pair of hits.

Spokane needs to win one of their three games in Everett to win the first half North Division championship. If Everett sweeps the series, they would pull into a tie with Spokane for the division lead and win the division flag due to a better head-to-head record. The second half of the Northwest League season begins Tuesday.

Vancouver’s seven runs over the first two frames had to stand up because they left 12 runners on base, cashing in on just four of 17 opportunities with men on base. They loaded the bases in the sixth and eighth innings and stranded two more runners in scoring position in the ninth. Werner Leal and Juan Castillo held the Vancouver bats at bay over the last five frames.

Baseball America released its midseason update of the top 30 Toronto Blue Jays prospects in the farm system. Two members of this year’s Vancouver team are on the list. Righthander Adam Kloffenstein is rated 11th and Will Robertson ranked 20th. A total of eight players with C’s connections are in the top 30.

A quick scour of the independent leagues has a handful of former Vancouver Canadians playing ball north of the border. 2015 C’s infielder/outfielder Connor Panas and 2012 reliever Arik Sikula are with the Quebec Capitales of the Can-Am League. Panas’ 2015 Vancouver teammate—first baseman Juan Kelly—is in the same league with Trois-Rivieres Aigles.

The Intercounty Baseball League in Ontario has three former C’s in 2013-2014 catcher Mike Reeves and 2014 hurler Alberto Tirado are with the Toronto Maple Leafs. 2016-2017 infielder Mattingly Romanin is with the Welland Jackfish.

The Canadians return home Saturday to conclude an ultimately disappointing first half of the season with a three-game series against the Tri-City Dust Devils. The game will be televised on Sportsnet Pacific. First pitch is at 7:05 pm.