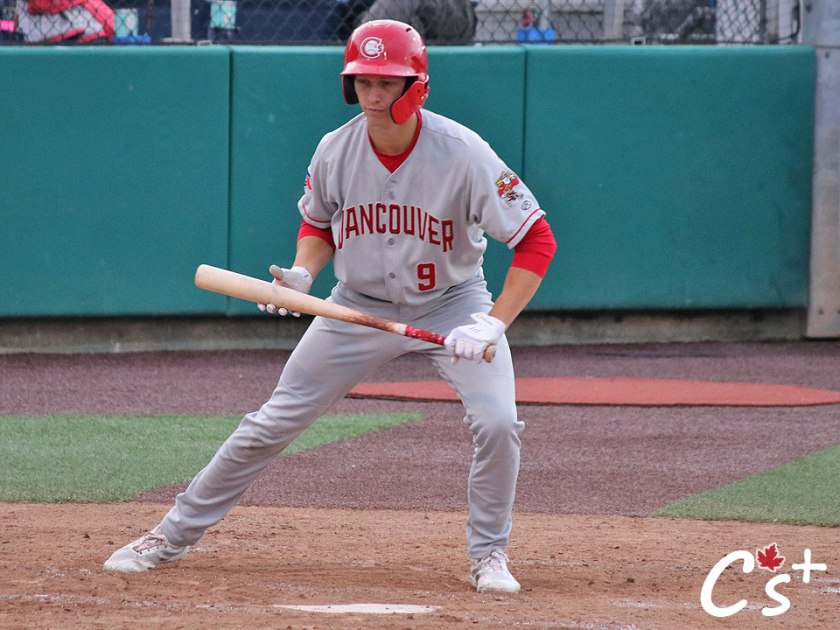 The Vancouver Canadians cannot get over the .500 hump in 2019. They fell to 3-4 in the second half after an 11-9 setback to the Boise Hawks at Boise Memorial Stadium Monday.

Aaron Schunk gave Boise the early lead with a solo home run in the first off Gabriel Ponce. The Hawks added another run in the second when Joe Aielts started the frame with a single, stole second base and scored when Tyler Plantier lined a two-out single to left on an 0-2 pitch.

Vancouver answered back with a four-run frame against Will Ethridge. Ronny Brito led off with a walk, went to second on a wild pitch and got to third on a Dom Abbadessa infield single to first. Trevor Schwecke drove home Brito with a single to left. Yorman Rodriguez and Philip Clarke had RBI singles and Rodriguez would eventually score on Ethridge’s fourth wild pitch of the inning. McGregory Contreras would hit into a 5-3 double play that resulted in Clarke being tagged out at third by Schunk before Contreras was thrown out at first.

Vancouver could not get a shutdown inning in the bottom of the third (a recurring theme for the night) when Ezequiel Tovar blooped a single to center, advanced to second on a Ponce balk and tagged up to go to third on a Schunk flyout to right. Michael Toglia lifted a sacrifice fly to left to make it a one-run ball game.

The Hawks regained the lead three batters into the fourth when Trevor Boone tripled home a Yorvis Torrealba single before being brought home on a Plantier base hit.

The C’s would pull ahead 6-5 in the fifth when Abbadessa worked a leadoff walk against Wander Cabrera and scampered home on a Schwecke double. Schwecke would pull into third on a Philip Clarke two-out ground ball to first and would race home after Bryant Quijada air-mailed a pickoff attempt at third.

The lead did not last as Toglia homered off Ponce in the bottom of the fifth to tie the game at 6-6. Nicolas Medina took over one base hit later and got out of the inning unscathed.

Monty’s Mounties grabbed the lead again in the sixth when Will Robertson and Cameron Eden opened the frame with base hits. Eden was forced out on a Brito fielder’s choice. Joel Condray relieved Cabrera and threw one to the backstop that advanced Brito to second. Luis De Los Santos would double home Robertson and Brito to put Vancouver ahead 8-6.

Say with it with me now, the lead did not last. Quijada homered off Medina in the home half of the sixth to cut the C’s lead to one. Bladimir Restituyo would make it to second on a throwing error by Brito at third and Restituyo would steal third. The stolen base was not really necessary as Schunk slammed his second homer of the game to put the Hawks ahead by one.

The Canadians battled back to tie it when Rodriguez reached on an infield single to short and stole his first base of the season. Robertson came up with a two-out base hit to bring in Rodriguez with the tying run.

A miracle then happened. Boise was kept off the scoreboard in the bottom of the seventh as Josh Almonte struck out two of the three men he faced.

Vancouver had a chance to take the lead in the eighth off Stephen Jones when Schwecke doubled with two out and made it to third on a throwing error by Boone in right. Rodriguez would line out to short to keep Schwecke from scoring.

Almonte struck out Plantier to begin the bottom of the eighth but a Quijada single and Clarke passed ball put the potential go-ahead run in scoring position. Restituyo struck out swinging but he got to second on a Clarke throwing error, bring Quijada to third. Tovar flied out to right for the second out to keep the runners in place and Schunk was intentionally walked by Almonte before Luke Gillingham took over. Gillingham got a fly ball to left that should have ended the inning but Contreras dropped the ball and that allowed Quijada and Restituyo to score the go-ahead and insurance runs.

Contreras drew a one-out walk against Jacob Wallace but that was the only baserunner Vancouver had in the ninth.

It’s a minor miracle this game did not go much longer past three hours as it finished in 3:04 despite seven errors, six wild pitches and two passed balls by the two teams combined.

After three walks and two runs batted in Sunday, Schwecke led the C’s with three hits and two RBI that included two doubles. Rodriguez and Robertson had two hits apiece.

Game two of this series goes Tuesday night at 6:15 pm Pacific Time. Alfredo Garcia will throw the first pitch for Boise. Juan Diaz is expected to do likewise for Vancouver. Rob Fai will have the call of the game on Sportsnet 650 and CanadiansBaseball.com.