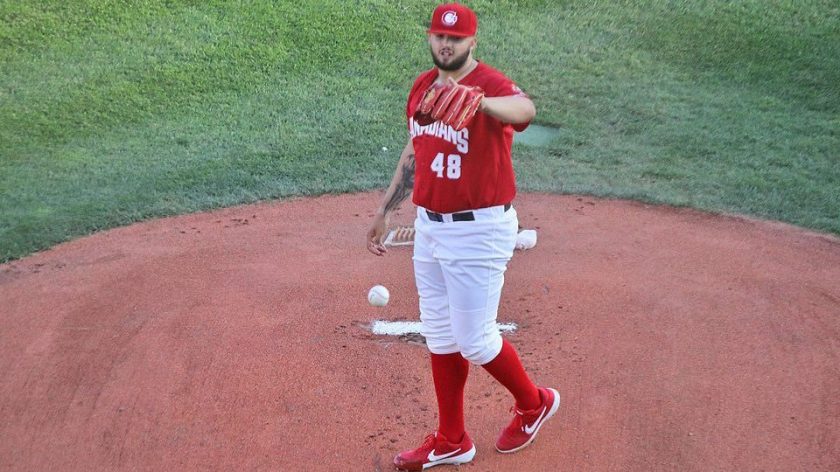 The Salem-Keizer Volcanoes held a walk-a-thon and the Vancouver Canadians were the beneficiaries. Eight of the nine Vancouver hitters drew a walk and recorded 13 bases on balls in total as they stiffed Salem-Keizer 9-1 at Nat Bailey Stadium Monday night.

The Canadians got to work early against Salem-Keizer starter Jordan Scott. Spencer Horwitz walked with one out and advanced to third on a Philip Clarke base hit to left. Salem-Keizer tried to convert an around-the-horn double play but McGregory Contreras beat out the relay to first to score Horwitz. Contreras stole second and Will Robertson walked but Robertson was picked off at first to stop the rally.

The second inning saw Cameron Eden hit his first professional home run as his fly ball cleared the left field fence into the C’s bullpen to make it 2-0 Vancouver.

Another Canadians run came in the fourth when Contreras ripped a single up the middle, stole second, went to third on a Robertson groundout to short and scored on a Ryan Sloniger double to left. Miguel Figueroa was summoned from the Salem-Keizer bullpen and he struck out Trevor Schwecke to strand Sloniger at third.

Salem-Keizer was held off the scoreboard for the first four innings by Alek Manoah but an Alexander Canario home run to left off William Gaston with one away in the fifth spoiled the shutout.

Monty’s Mounties would put the game away after the seventh inning stretch. Luis De Los Santos singled to center and Tanner Morris walked to chase Volcanoes reliever Abel Adames from the game. Israel Cruz walked Clarke to load the bases but had a chance to get De Los Santos at the plate after fielding a comebacker off the bat of Contreras. Cruz could not get a clean handle on the ball and had to settle for throwing out Contreras at first instead of going home. That allowed De Los Santos to score the fourth Vancouver run.

Robertson drew a walk to reload the bases and Sloniger socked a double to right-center field to plate Morris and Clarke. Eden drew a walk to fill the bases again. Volcanoes manager Tom Trebelhorn went to the bullpen and wound up having to change the battery as Jorge Labrador took to the mound and Chris Corbett replaced Brandon Martorano behind the plate. Martorano—or should it be Martyr-ano—was shaken up trying to block a pitch that hit him in a most sensitive area.

Labrador had trouble finding the plate as he walked Schwecke and De Los Santos to bring home Robertson and Sloniger respectively. Morris then took one for the team to bring home Eden for the C’s final run.

Grayson Huffman pitched 1-2/3 innings of scoreless relief after taking over for Gaston with one out in the seventh. Mike Pascoe finished up with a goose egg in the ninth to help the C’s salvage a split of the four-game series.

The Volcanoes tried to get to Manoah early when Canario and Jeff Houghtby started the game with base hits. Houghtby was able to flare one fair down the left field line beyond the reach of De Los Santos who was running in from short. Manoah would strike out Carter Aldrete and Brandon Martorano looking with an Armani Smith flyout in between to escape the first.

The second inning saw Manoah use 11 pitches to strike out the side swinging by sitting down Harrison Freed, Beicker Mendoza and Matt Malkin.

Salem-Keizer got two runners aboard in the third on a Tyler Wyatt single and a Houghtby walk but Manoah rung up two batters by tossing chairs to Canario and Smith.

A pair of groundouts and a Mendoza strikeout in the fourth rounded out the evening for Manoah. The Blue Jays first round hurler tried to barehand a grounder from Freed but it deflected to De Los Santos at short and he was able to make the barehand throw to nail Freed at first for a 1-6-3 putout.

To sum it up, in short, the executive summary, the “too long, didn’t read” upshot is this—watching Manoah pitch was an absolute treat. He was throwing gas and his slider was filthy. The Volcanoes hitters were simply overmatched.

The Volcanoes had chances to get back into the game. Houghtby doubled off Gaston after Canario’s home run but was stranded when Aldrete struck out. Gaston issued a pair of one-out walks to Martorano and Freed in the sixth but was able to escape without any runs crossing the dish.

More trouble for Gaston took place in the seventh when Wyatt dropped down a bunt single to third and made it to second base on a throwing error by Schwecke. A wild pitch from Gaston moved Wyatt to third. Huffman was called in from the C’s bullpen and he put out the fire by striking out Houghtby and Aldrete.

The eighth saw Huffman navigate around a Corbett walk and a Mendoza bloop single to center with two more strikeouts, including a punchout of Smith who was visibly upset with home plate umpire Willie Traynor after being called out on strikes to begin the frame.

Pascoe limited the Volcanoes to a two-out single by Houghtby to limit the damage and ended the game by hanging a golden sombrero on Aldrete. Canario and Smith were one back of the clubhouse lead with three strikeouts apiece for the hat trick. Freed, Mendoza and Malkin struck out twice while Houghtby, Martarano and Wyatt whiffed once for a team total of 19. Only Corbett did not strikeout as he drew a walk on a 3-2 pitch in his only plate appearance in the eighth.

Horwitz was robbed of a hit in the third inning on a running catch by Freed in right-center field. The biggest robbery of the night was in the eighth when Clarke was denied on a terrific diving catch by Smith in center.

The C’s tried to pad their two-run lead in the fifth when Morris and Clarke walked with one and two outs respectively but Figueroa stranded them by retiring Contreras on a flyout.

Two more walks for Vancouver came in the sixth when Robertson began the frame with a base on balls but he was doubled off on an 8-3 putout after a Sloniger fly ball. Eden drew a walk off Figueroa and that led to another Volcanoes pitching change. Adames uncorked a wild pitch to move Eden to third but got Schwecke to ground out to second to end the threat.

Sloniger was not only “Feeling Good” with his Michael Buble walk-up music. He was feeling good at the plate too with two doubles, a walk and three RBI. Eden added two free passes and a stolen base with his home run. Contreras had a two-hit, two-stolen base night and Clarke was 1-for-3 with two walks. Robertson walked three times and Morris heard ball four twice. Every C’s hitter reached base by a hit or a walk.

The Canadians get a day off Tuesday but are back on the field in front a national television audience Wednesday as the Tri-City Dust Devils visit the Nat. Rob Fai, Ricky Romero and Caroline Frolic will have the game covered on Sportsnet Pacific. Adam Kloffenstein is scheduled to fire the first pitch for Vancouver at 7:05 pm.