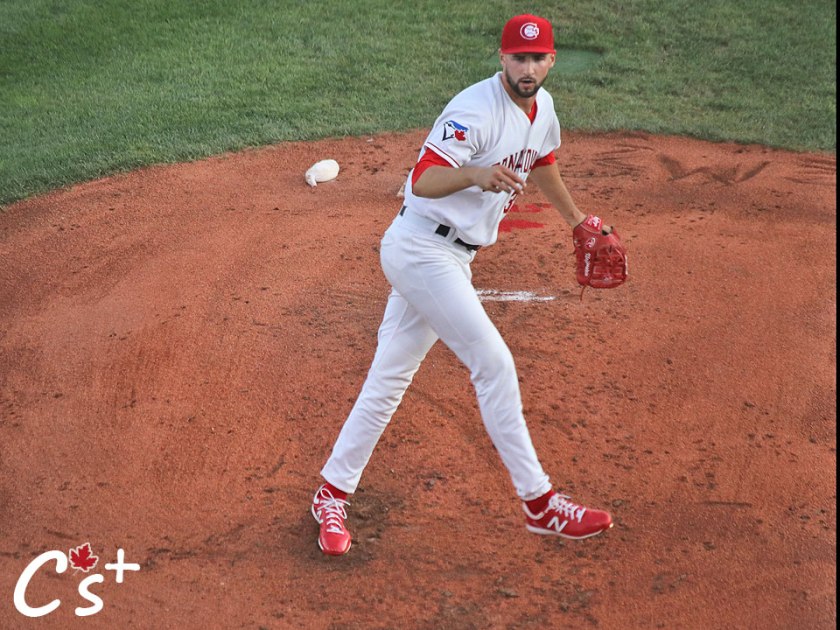 The Vancouver Canadians salvaged a split of their six-game series with the Tri-City Dust Devils thanks to a 7-2 victory at Gesa Stadium Sunday afternoon.

Tri-City starter Dustin Daniel was one out away from escaping the first inning when Tanner Morris was thrown out trying to steal second after getting the game’s first hit. Cameron Eden extended the inning with a four-pitch walk and raced home on a triple to center field by Ryan Gold. Spencer Horwitz followed with a walk but Luis De Los Santos flied out to leave runners on the corners.

Vancouver added to their lead in the second inning on one-out walks by Will Robertson, Andres Guerra and Tanner Kirwer. Robertson would reach the pentagon on a Morris sacrifice fly to center to make it 2-0 for the visitors.

After being turned back in the third inning when a Horwitz line out to third resulted in Gold being doubled off after a leadoff walk, the C’s made it up with two runs in the fourth. Rafael Lantigua started things off with a double to left and would score on a one-out base hit to right by Guerra. Tri-City manager Andy Schatzley pulled Davis from the game in favour of Kyle Molnar. The Tanners went to work on the new Dust Devils pitcher with Kirwer dropping a bunt single to third and Morris lining a single to left to load the bases. Eden managed to get Guerra home just before Tri-City could turn a 5-3-4 double play that resulted in Kirwer being out at third and Eden being out at second.

After three shutout frames by Adam Kloffenstein, Paxton Schultz made his Blue Jays organizational debut after being picked up from Milwaukee in the Derek Fisher deal. After striking out the first four batters he faced—three via the strikeout—a Jose Verrier walk, a Livan Soto triple and a Brendon Davis base hit gave Tri-City their first two runs of the game to Vancouver’s lead in half. Schultz settled down to sit down the next six hitters he faced to get him into the seventh. He turned away a Verrier double and a Soto walk by starting a 1-4-3 double play to end the inning.

Vancouver began to pull away in the top of the eighth when a De Los Santos double to left chased Luis Ramirez from the game. Zac Kristofak was summoned from the Dust Devils bullpen and was rocked for a two-run triple by Robertson to center that scored De Los Santos and a Lantigua base hit. Robertson would tag up and score on a Guerra sacrifice fly to left.

Justin Maese worked around a two-out walk to Carlos Herrera in the eighth and stranded a Carlos Reina single and Verrier double in scoring position by striking out the side in the ninth.

The Dust Devils made Kloffenstein work in his three-inning outing. He threw 22 pitches in the first but he emerged unscathed after one-out walks to Davis and Francisco Del Valle. Tri-City made Kloffenstein throw 26 pitches in the second. Pedro Diaz singled with one out and Reina reached base on a Morris error at third but Kloffenstein rung up Verrier and Soto looking to strand two more runnesr. King Kloff did retiring the side in order, using 18 pitches that included a couple of punch outs.

One negative aspect of Kloffenstein’s outing was only throwing three first-pitch strikes to the 13 batters he faced. In comparison, Schultz got ahead of half of the 16 batters he faced in earning the victory while Maese was 7-for-9 in that department.

On offense, the Canadians got at least one hit from eight of their starters and all nine reached base. Morris went 3-for-4 with a sacrifice fly and Kirwer reached base three times with a single and two walks. Gold had two of Vancouver’s five extra-base hits with an RBI triple and a double and Lantigua had the other multi-hit game with a 2-for-5 day at the plate.

Guerra had a nice debut in a Vancouver uniform with an RBI single, a sacrifice fly and a walk while going 1-for-2. He helped the C’s pitching staff rack up 15 strikeouts on the day. Kloffenstein struck out five while Schultz whiffed six and Maese fanned four.

In the six-game series against Tri-City, the Canadians were outscored 31-28 but managed to earn the split by taking the last two games.

The High-A West transaction column indicates that the C’s have activated White Rock, BC right-hander Brayden Bouchey off the 7-day injured list. Bouchey last pitched for Monty’s Mounties in the clinching Game 4 of the 2017 Northwest League championship against the Eugene Emeralds. Outfielder D.J. Neal has been placed on the IL after suffering a leg injury during Thursday’s game.

The Canadians have Monday off but will be back in action for their home away from home opener Tuesday night at Ron Tonkin Field in Hillsboro. The Spokane Indians will be the opposition for a 7:05 pm first pitch. Spokane was run over by the Eugene Emeralds as they lost five of six games by being outscored 54-30.

The C’s have not announced a starter yet but by going with Kloffenstein in the series opener and closer against Tri-City, it appears Vancouver will go with a five-man rotation. That should mean Sean Wymer will be the next man up Tuesday.

The Dunedin Blue Jays avoided a six-game sweep in Tampa by beating the Yankees affiliate 4-1. 2019 C’s hurler William Gaston earned the victory with two shutout innings while Gabriel Ponce (2019) struck out seven over three-innings of one-run ball. A home run by Ryan Sloniger (2019) in the second inning turned out to be the winning run. He also drew a walk.

New Hampshire lost its fifth in a row as they were unable to hold a 6-5 lead in the late going. A Chavez Young (2017) triple gave the Fisher Cats the one-run advantage but Portland would pull away with a six-run eighth to win it 12-6. Otto Lopez (2017) had a double, a single, a walk and a stolen base and Kevin Vicuña (2017) singled, walked and stole two bases. Zach Logue (2017) struck out eight but gave up five runs in 4-2/3 innings.

The Buffalo Bisons took four out of six against Worcester with a 4-1 win. Josh Palacios (2016) was 2-for-2 in the leadoff spot but was hit by a pitch in the fourth and left the game in the sixth. Cullen Large (2017) had a couple of base knocks. Jackson McClelland (2015-2016) earned the victory with two shutout innings of one-hit ball that included three strikeouts.