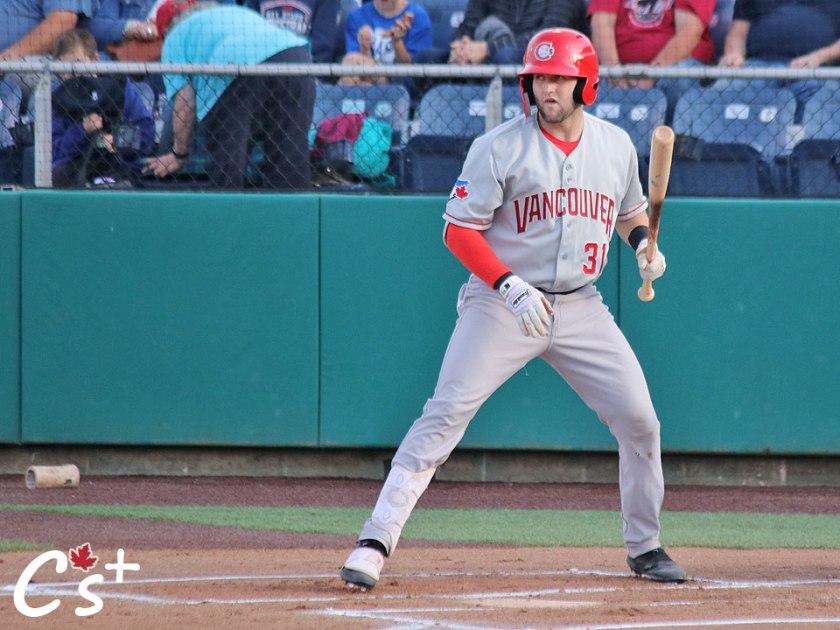 The Vancouver Canadians put an end to a two-game losing streak with a 13-5 win over the Boise Hawks at Boise Memorial Stadium Wednesday.

The C’s struck first with a two-out rally in the first inning. Philip Clarke got on base with a walk from Jeffri Ocando and scored on a line-drive double to center by Jesus Lopez. That was the appetizer for the main course in the second inning.

The Vancouver offence exploded with another two-out uprising. Tanner Morris and Northwest League All-Star Trevor Schwecke both singled and they would score on a Clarke single and a Lopez double respectively. Will Robertson would walk to load the bases and McGregory Contreras would clear them with a three-run double. Cameron Eden would chase Ocando from the game with a run-scoring double to cash in Contreras. Keven Pimentel was summoned from the Boise bullpen to get the final out.

The Hawks got on the board in the bottom of the second against Nick Fraze when a Trey Jacobs groundout to second scored a leadoff single from Michael Toglia who made it to third on a Joe Aielts double.

The C’s offence got back to work in the third against Pimentel. Clarke would single in a pair of runs to score a Ronny Brito base hit and a Schwecke fielder’s choice. Robertson singled home Clarke and Brett Wright would eventually bring in Robertson with a base knock after a Contreras walk and an Eden hit by pitch loaded the bases.

Boise would cut into the 10-run deficit starting in the fifth against Jared DiCesare. They loaded the bases with one away but could only get an Aaron Schunk fielder’s choice to score a Nic Motley single.

Jacobs homered in the sixth to plate an Aielts single in the sixth off DiCesare and three straight singles with one out in the seventh off Grayson Huffman produced another Boise run with Toglia scoring Tovar to bring Boise within six.

After Fineas Del Bonta-Smith and Rayne Supple held the Canadians bats in check for two innings apiece, they would get going again in the top of the eighth. In a battle of the Camerons, Eden tripling off Hawks reliever Cameron Enck with nobody out. A Brito grounder to third scored Eden for Vancouver’s 12th run.

The C’s make it a baker’s dozen in the ninth when Clarke’s one-out double was plated by Robertson’s two-out triple.

Parker Caracci finished the game for Vancouver with a pair of scoreless innings. DiCesare was credited with the victory.

The C’s did a good job of dominating the strike zone on both sides of the ball. The pitching quartet of Fraze, DiCesare, Huffman and Caracci combined for 11 strikeouts and two walks. Fraze and DiCesare led the way with four whiffs apiece with Fraze throwing 28 strikes out of 34 pitches. The Vancouver hitters combined for six walks and struck out eight times. Contreras and Robertson walked twice apiece while Morris and Clarke drew the others.

Clarke had a four-hit night, Lopez had three while Morris, Robertson and Eden had two apiece. Every Vancouver hitter had at least one base hit. Eden took one for the team. Schwecke had a stolen base.

Well-deserved congratulations go out to pitcher Adam Kloffenstein and infielders Yorman Rodriguez and Trevor Schwecke as they will represent the Canadians at next week’s Northwest League/Pioneer League All-Star Game in Boise. I don’t think anyone can quibble with those selections. Right-hander Grant Townsend had a strong start to the year but he missed the better of July before returning to action this week.

Monty’s Mounties will try to go for the series split Thursday as Alex Nolan will get the call on the mound. The former Brock Badger will go up against Hawks lefty Zak Baayoun in a 7:15 pm Pacific Time start at Boise Memorial Stadium. The game will be on Sportsnet 650 and CanadiansBaseball.com.